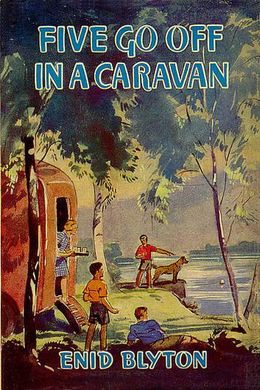 Five Go Off in a Caravan

The Famous Five are thrilled to go on a caravanning holiday with no parents and only Julian in charge. They all head off to Merran Lake, where a circus is camping nearby! But two of the circus performers start acting suspiciously; they’ve got something to hide. What could it be - and can the Five solve the mystery without getting caught?

‘I do love the beginning of the summer hols,’ said Julian. ‘They always seem to stretch out ahead for ages and ages.’

‘They go so nice and slowly at first,’ said Anne, his little sister. ‘Then they start to gallop.’

The others laughed. They knew exactly what Anne meant. ‘Woof,’ said a deep voice, as if someone else thoroughly agreed too.

‘Timmy thinks you’re right, Anne,’ said George, and patted the big dog lying panting beside them. Dick patted him, too, and Timmy licked them both.

The four children were lying in a sunny garden in the first week of the holidays. Usually they went to their cousin Georgina’s home for holidays, at Kirrin—but this time, for a change, they were all at the home of Julian, Dick and Anne.

Julian was the oldest, a tall, sturdy boy with a strong and pleasant face. Dick and Georgina came next. Georgina looked more like a curly–headed boy than a girl, and she insisted on being called George. Even the teachers at school called her George. Anne was the youngest, though, much to her delight, she was really growing taller now.

‘Daddy said this morning that if we didn’t want to stay here all the hols we could choose what we wanted to do,’ said Anne. ‘I vote for staying here.’

‘We could go off somewhere just for two weeks, perhaps,’ said Dick. ‘For a change.’

‘Shall we go to Kirrin, and stay with George’s mother and father for a bit?’ said Julian, thinking that perhaps George would like this.

‘No,’ said George at once. ‘I went home at half–term, and Mother said Father was just beginning one of his experiments in something or other—and you know what that means. If we go there we’d have to walk about on tiptoe, and talk in whispers, and keep out of his way the whole time.’

‘That’s the worst of having a scientist for a father,’ said Dick, lying down on his back and shutting his eyes. ‘Well, your mother couldn’t cope with us and with your father, too, in the middle of one of his experiments at the same time. Sparks would fly.’

‘I like Uncle Quentin, but I’m afraid of him when he’s in one of his tempers,’ said Anne. ‘He shouts so.’

‘It’s decided that we won’t go to Kirrin, then,’ said Julian, yawning. ‘Not these hols, anyhow. You can always go and see Mother for a week or so, George, when you want to. What shall we do, then? Stay here all the time?’

They were now all lying down on their backs in the sun, their eyes shut. What a hot afternoon! Timmy sat up by George, his pink tongue hanging out, panting loudly.

‘Don’t, Timmy,’ said Anne. ‘You sound as if you have been running for miles, and you make me feel hotter than ever.’

Timmy put a friendly paw on Anne’s middle and she squealed. ‘Oh, Timmy—your paw’s heavy. Take it off.’

‘You know, I think if we were allowed to go off by ourselves somewhere, it would be rather fun,’ said George, biting a blade of grass and squinting up into the deep blue sky. ‘The biggest fun we’ve ever had was when we were alone on Kirrin Island, for instance. Couldn’t we go off somewhere all by ourselves?’

‘But where?’ said Dick. ‘And how? I mean we aren’t old enough to take a car—though I bet I could drive one. It wouldn’t be much fun going on bicycles, because Anne can’t ride as fast as we can.’

‘And somebody always gets a puncture,’ said Julian.

‘It would be jolly good fun to go off on horses,’ said George. ‘Only we haven’t got even one.’

‘Yes, we have—there’s old Dobby down in the field,’ said Dick. ‘He is ours. He used to draw the pony–cart, but we don’t use it any more now he’s turned out to grass.’

There was a silence, and everyone thought lazily about holidays. Timmy snapped at a fly, and his teeth came together with a loud click.

‘Wish I could catch flies like that,’ said Dick, flapping away a blue–bottle. ‘Come and catch this one, Timmy, old thing.’

‘What about a walking tour?’ said Julian after a pause. There was a chorus of groans.

‘We shouldn’t be allowed to.’

‘All right, all right,’ said Julian. ‘Think of a better idea, then.’

‘I’d like to go somewhere where we could bathe,’ said Anne. ‘In a lake, for instance, if we can’t go to the sea.’

‘Sounds nice,’ said Dick. ‘My goodness, I’m sleepy. Let’s hurry up and settle this matter, or I shall be snoring hard.’

‘Looks as if we’ll have to stay at home all the hols, then,’ said Julian. ‘Well—I’m going to have a snooze.’

In two minutes they were all asleep on the grass except Timmy.”