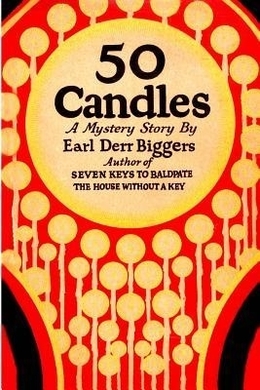 50 Candles starts in a courthouse in Honolulu, moves to China, then to fog-shrouded San Francisco. Many of the elements used in the Charlie Chan series are present: Chinese characters (both sinister and sympathetic), the Honolulu legal system, a shrewd detective (in this case, the lawyer Mark Drew rather than a policemen), and a baffling murder complete with red herrings and plenty of suspects. Though Fifty Candles is a murder mystery, it is also a romance, with the romantic elements at times in the forefront. Mostly, though, it is a book that will delight Biggers’ many fans as they trace the origins of Charlie Chan.

From the records of the district court at Honolulu for the year 1898 you may, if you have patience, unearth the dim beginnings of this story of the fifty candles. It is a story that stretches over twenty years, all the way from that bare Honolulu court room to a night of fog and violence in San Francisco. Many months after the night of the tule–fog I happened into the Hawaiian capital, and took down from a library shelf a big legal–looking book, bound in bright yellow leather the color of a Filipino house–boy’s shoes on his Saturday night in town. I found what I was looking for under the heading: “In the Matter of Chang See.”