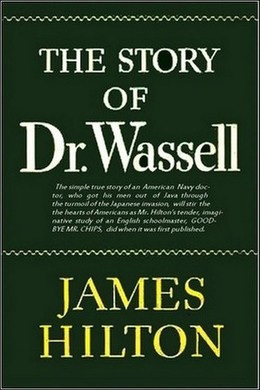 The Story of Dr. Wassell

The Story of Dr. Wassell is a moving account of the trials of a Navy field doctor, Corydon Wassell, during the outbreak of WWII on Java in the South Pacific.

The men from the Marblehead looked up from their cots and wondered what the doctor would be like. They were wounded, burned, and suffering; thousands of miles from home, in a strange country among people who spoke strange languages; their ship had been smashed up, and the battle lost for their side. Pain, defeat, and loneliness had leagued against them during the journey from Tjilatjap, on the coast, to the inland hospital; there they had been skillfully patched up by Dutch surgeons, and a certain measure of sad tranquillity had come upon them. The Dutch were very kind, and the Javanese nurses flitted about like little friendly animals. But what had really cheered them considerably, after so much disaster, was the news that an American Navy Doctor had been assigned to take care of them all.

When you are ill and in pain and have to have things done for you, the personality of a doctor becomes of absorbing interest. If you have time to wonder about him in advance, you cannot help idealizing; and the picture is hound to be the image of your own ideals. To McGuffey, Ship’s Cook, whose injuries were slighter than those of the others, the doctor must surely be a big burly fellow, an earth–bound superman with strong hands and a deep black voice, like the bark of a retriever dog; because that was the kind of man and dog McGuffey loved. To Francini, Second Class Seaman, the image was a little different. His prewar ambitions had been to study mathematics and become a gunnery officer; now his earthly desire, almost the only one he could find room for, was to ease the pain of shrapnel wounds; but all this did not prevent him from picturing the doctor as a quiet, scholarly man, one who could take in the problems of the human body and solve them like some vast quadratic equation.

And so with all the others, though few of them guessed and none confessed that such pictures were shaping in their minds. But when they knew that the doctor was to visit them they looked up with curious eagerness at the sound of new footsteps along the corridor. And presently he came.

For a fraction of a second before they saw him they saw his cigarette in a long white holder; and because none of them had expected that, it prepared them for other unexpected things. But the unexpected was naturally the disappointing, because when you have imagined perfection anything different must be rather a pity. The men thought the doctor’s entire appearance was rather a pity. There was nothing striking about him, except perhaps his ears, which were rather large. McGuffey, whose own right ear had been partly burned off by a bomb blast, could not help noticing them especially. Furthermore, he dressed neither carelessly nor smartly enough to inspire a legend; his open shirt and light trousers were just unimpressively neat, and he walked into the ward with an almost apologetic air, as if he were not quite sure he had found the right place.

Moreover, not only was there this long cigarette holder, but he leaned over the rail of one of the end beds and began, in a slow, drawling voice: “Morning, boys.” He then gave his name, adding: “But just call me Doc or Commander—anything you like.” (McGuffey thought cynically: “I’ll call you something if you don’t stop dropping ashes all over my bed…”) The doctor went on, gaining confidence as he heard his own voice: “The main thing is for you to know that I’m here to help you. So cheer up—our number’s on top—everything’s going to be all right from now on. Of course the Dutch doctors are in charge of your treatment.” (“Thank God for that!” thought McGuffey.) “My job’s just to look after you in a general sort of way. So don’t worry, we’ll have you all well again in no time.”

A little sigh was already running through the minds of the men from the Marblehead. The old stuff. Nothing wrong about it, of course, and had it been barked out in a quarter–deck voice it would have sounded well enough, and perhaps even stimulating. But in that curious slow drawl and with the long cigarette holder, it carried a whiff of unconvincingness.

McGuffey, shrugging his shoulders under the bedcovers, thought openly: “Just our luck, on top of everything else, to get a fellow like that…”

And the doctor at that moment was thinking much the same kind of thing about his job. To begin with, he could not quite size up what he had to do, for the hospital was so well–equipped and the Dutch staff were so obviously competent that there did not seem likely to be many tasks left over for him. And that, in a way, caused his initial misgiving—not a cynical one, but rather a degree of humility based on the plain fact that all his life he had had jobs that had come to nothing much (like the amoebic dysentery research in China), or had petered out (like the CCC Camp), or had just failed to click into anything that could be called success