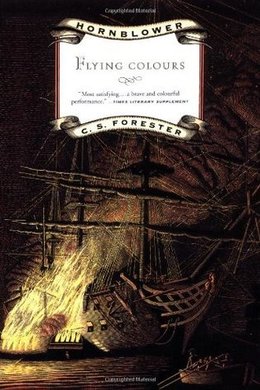 Forced to surrender his ship, the Sutherland, after a long and bloody battle, Captain Horatio Hornblower now bides his time as a prisoner in a French fortress. Within days he and his first lieutenant, Bush, who was crippled in the last fight, are to be taken to Paris to be tried on trumped-up charges of violating the laws of war, and most probably executed as part of Napoleon’s attempt to rally the warweary empire behind him. Even if Hornblower escapes this fate and somehow finds his way back to England, he will face court-martial for his surrender of a British ship. As fears for his life and his reputation compete in his mind with worries about his pregnant wife and his possibly widowed lover, the indomitable captain impatiently awaits the chance to make his next move.

Captain Hornblower was walking up and down along that sector of the ramparts of Rosas, delimited by two sentries with loaded muskets, which the commandant had granted to him for exercise. Overhead shone the bright autumn sun of the Mediterranean, hanging in a blue Mediterranean sky and shining on the Mediterranean blue of Rosas Bay—the blue water fringed with white where the little waves broke against the shore of golden sand and grey–green cliff. Black against the sun above his head there flapped the tricolour flag of France, proclaiming to the world that Rosas was in the hands of the French, that Captain Hornblower was a prisoner. Not half a mile from where he walked lay the dismasted wreck of his ship the Sutherland, beached to prevent her from sinking, and in line beyond her there swung at their anchors the four ships of the line which had fought her. Hornblower, narrowing his eyes and with a twinge of regret for his lost telescope, could see even at that distance that they were not ready for sea again, nor were likely to be. Even the two–decker which had emerged from the fight with all her masts intact still had her pumps at work every two hours to keep her afloat, and the other three had not yet succeeded in setting up masts to replace the ones lost in the battle. The French were a lubberly lot of non–seamen, as might be expected after seventeen years of defeat at sea and six of continuous blockade.

They had been all honey to him, in their French fashion, praising him for his “glorious defence” after his “bold initiative” in dashing in with his ship to interpose between their four and their refuge at Rosas. They had expressed the liveliest pleasure at discovering that he had miraculously emerged unhurt from a battle which had left two thirds of his men killed and wounded. But they had plundered in the fashion which had made the armed forces of the Empire hated throughout Europe. They had searched the pockets even of the wounded who had cumbered the Sutherland’s decks in moaning heaps. Their admiral, on his first encounter with Hornblower, had expressed surprise that the latter was not wearing the sword which the admiral had sent back to him in recognition of his gallantry, and on Hornblower’s denial that he had ever seen the weapon again after giving it up had instituted a search which discovered the sword cast aside somewhere in his flagship, the glorious inscription still engraved upon the blade, but with the gold stripped from hilt and guard and scabbard. And the admiral had merely laughed at that and had not dreamed of instituting a search for the thief; the Patriotic Fund’s gift still hung at Hornblower’s side, the tang of the blade protruding nakedly from the scabbard without the gold and ivory and seed pearls which had adorned it.

The French soldiers and sailors who had swarmed over the captured ship had torn away even the brasswork in the same fashion; they had gorged upon the unappetising provisions in a way which proved how miserable were the rations provided for the men who fought for the Empire—but it was only a few who had swilled themselves into insensibility from the rum casks. In face of similar temptation (to which no British officer would have exposed his men) British seamen would have drunk until nine tenths of them were incapable or fighting mad. The French officers had made the usual appeal to their prisoners to join the French ranks, making the usual tempting offers of good treatment and regular pay to anyone who cared to enlist either in the army or the navy. Hornblower was proud that no single man had succumbed to the temptation.

As a consequence the few sound men now languished in strict confinement in one of the empty storerooms of the fortress, deprived of the tobacco and rum and fresh air which for most of them represented the difference between heaven and hell. The wounded—the hundred and forty–five wounded—were rotting in a dank casemate where gangrene and fever would soon make an end of them. To the logical French mind the poverty–stricken Army of Catalonia, which could do little even for its own wounded, would be mad to expend any of its resources on attention to wounded who would be intolerable nuisances should they survive.

A little moan escaped Hornblower’s lips as he paced the ramparts. He had a room of his own, a servant to wait on him, fresh air and sunshine, while the poor devils he had commanded were suffering all the miseries of confinement—even the three or four other unwounded officers were lodged in the town gaol. True, he suspected that he was being reserved for another fate. During those glorious days when, in command of the Sutherland, he had won for himself, unknowing, the nickname of “the Terror of the Mediterranean,” he had managed to storm the battery at Llanza by bringing his ship up close to it flying the tricolour flag