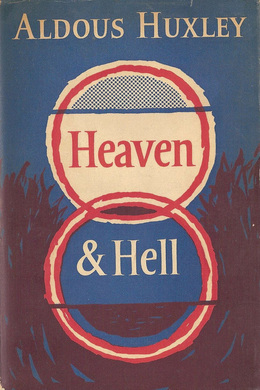 In 1953, in the presence of an investigator, Aldous Huxley took four-tenths of a gramme of mescalin, sat down and waited to see what would happen. When he opened his eyes everything, from the flowers in a vase to the creases in his trousers, was transformed. Huxley described his experience with breathtaking immediacy in The Doors of Perception. In its sequel Heaven and Hell, he goes on to explore the history and nature of mysticism. Focusing on how science, art, religion, literature, and psychoactive drugs can expand the everyday view of reality and offer a more profound grasp of the human experience.\n\nHuxley’s essays The Doors of Perception and Heaven and Hell ushered in a whole new generation of counter-culture icons such as Jackson Pollock, John Cage, Timothy Leary and Jim Morrison.

In the history of science the collector of specimens preceded the zoologist and followed the exponents of natural theology and magic. He had ceased to study animals in the spirit of the authors of the Bestiaries, for whom the ant was incarnate industry, the panther an emblem, surprisingly enough, of Christ, the polecat a shocking example of uninhibited lasciviousness. But, except in a rudimentary way, he was not yet a physiologist, ecologist or student of animal behaviour. His primary concern was to make a census, to catch, kill, stuff and describe as many kinds of beasts as he could lay his hands on.

Like the earth of a hundred years ago, our mind still has its darkest Africas, its unmapped Borneos and Amazonian basins. In relation to the fauna of these regions we are not yet zoologists, we are mere naturalists and collectors of specimens. The fact is unfortunate; but we have to accept it, we have to make the best of it. However lowly, the work of the collector must be done, before we can proceed to the higher scientific tasks of classification, analysis, experiment and theory making.

Like the giraffe and the duck–billed platypus, the creatures inhabiting these remoter regions of the mind are exceedingly improbable. Nevertheless they exist, they are facts of observation; and as such, they cannot be ignored by anyone who is honestly trying to understand the world in which he lives.

It is difficult, it is all but impossible, to speak of mental events except in similes drawn from the more familiar universe of material things. If I have made use of geographical and zoological metaphors, it is not wantonly, out of a mere addiction to picturesque language. It is because such metaphors express very forcibly the essential otherness of the mind’s far continents, the complete autonomy and self–sufficiency of their inhabitants. A man consists of what I may call an Old World of personal consciousness and, beyond a dividing sea, a series of New Worlds—the not too distant Virginias and Carolinas of the personal subconscious and the vegetative soul; the Far West of the collective unconscious, with its flora of symbols, its tribes of aboriginal archetypes; and, across another, vaster ocean, at the antipodes of everyday consciousness, the world of Visionary Experience.

If you go to New South Wales, you will see marsupials hopping about the countryside. And if you go to the antipodes of the self–conscious mind, you will encounter all sorts of creatures at least as odd as kangaroos. You do not invent these creatures any more than you invent marsupials. They live their own lives in complete independence. A man cannot control them. All he can do is to go to the mental equivalent of Australia and look around him.

Some people never consciously discover their antipodes. Others make an occasional landing. Yet others (but they are few) find it easy to go and come as they please. For the naturalist of the mind, the collector of psychological specimens, the primary need is some safe, easy and reliable method of transporting himself and others from the Old World to the New, from the continent of familiar cows and horses to the continent of the wallaby and the platypus.

Two such methods exist. Neither of them is perfect; but both are sufficiently reliable, sufficiently easy and sufficiently safe to justify their employment by those who know what they are doing. In the first case the soul is transported to its far–off destination by the aid of a chemical—either mescalin or lysergic acid. In the second case, the vehicle is psychological in nature, and the passage to the mind’s antipodes is accomplished by hypnosis. The two vehicles carry the consciousness to the same region; but the drug has the longer range and takes its passengers further into the terra incognita. See Appendix I.

How and why does hypnosis produce its observed effects? We do not know. For our present purposes, however, we do not have to know. All that is necessary, in this context, is to record the fact that some hypnotic subjects are transported, in the trance state, to a region in the mind’s antipodes, where they find the equivalent of marsupials—strange psychological creatures leading an autonomous existence according to the law of their own being.

About the physiological effects of mescalin we know a little. Probably (for we are not yet certain) it interferes with the enzyme system that regulates cerebral functioning. By doing so it lowers the efficiency of the brain as an instrument for focussing mind on the problems of life on the surface of our planet. This lowering of what may be called the biological efficiency of the brain seems to permit the entry into consciousness of certain classes of mental events, which are normally excluded, because they possess no survival value