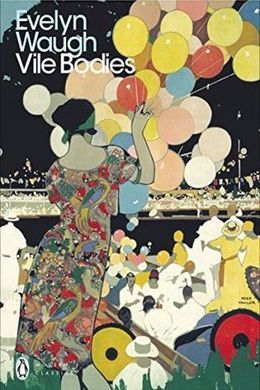 The Bright Young Things of 1920s Mayfair, with their paradoxical mix of innocence and sophistication, exercise their inventive minds and vile bodies in every kind of capricious escapade, whether it is promiscuity, dancing, cocktail parties or sports cars. A vivid assortment of characters, among them the struggling writer Adam Fenwick-Symes and the glamorous, aristocratic Nina Blount, hunt fast and furiously for ever greater sensations and the hedonistic fulfilment of their desires. Evelyn Waugh’s acidly funny and experimental satire shows a new generation emerging in the years after the First World War, revealing the darkness and vulnerability beneath the glittering surface of the high life.

It was clearly going to be a bad crossing.

With Asiatic resignation Father Rothschild S.J. put down his suitcase in the corner of the bar and went on deck. (It was a small suitcase of imitation crocodile hide. The initials stamped on it in Gothic characters were not Father Rothschild’s, for he had borrowed it that morning from the valet–de–chambre of his hotel. It contained some rudimentary underclothes, six important new books in six languages, a false beard and a school atlas and gazetteer heavily annotated.) Standing on the deck Father Rothschild leant his elbows on the rail, rested his chin in his hands and surveyed the procession of passengers coming up the gangway, each face eloquent of polite misgiving.

Very few of them were unknown to the Jesuit, for it was his happy knack to remember everything that could possibly be learned about every one who could possibly be of any importance. His tongue protruded very slightly and, had they not all been so concerned with luggage and the weather, some one might have observed in him a peculiar resemblance to those plaster reproductions of the gargoyles of Notre Dame which may be seen in the shop windows of artists’ colourmen tinted the colour of ‘Old Ivory’, peering intently from among stencil outfits and plasticine and tubes of water–colour paint. High above his head swung Mrs Melrose Ape’s travel–worn Packard car, bearing the dust of three continents, against the darkening sky, and up the companion–way at the head of her angels strode Mrs Melrose Ape, the woman evangelist.

‘Chastity…. Where is Chastity?’

‘That girl’s more trouble than she’s worth. Whenever there’s any packing to be done, Chastity doesn’t feel well. Are all the rest here—Humility, Prudence, Divine Discontent, Mercy, Justice and Creative Endeavour?’

‘Creative Endeavour lost her wings, Mrs Ape. She got talking to a gentleman in the train…. Oh, there she is.’

Too breathless to speak, Creative Endeavour nodded. (Each of the angels carried her wings in a little black box like a violin case.)

‘Right,’ said Mrs Ape, ‘and just you hold on to ’em tight and not so much talking to gentlemen in trains. You’re angels, not a panto, see?’

The angels crowded together disconsolately. It was awful when Mrs Ape was like this. My, how they would pinch Chastity and Creative Endeavour when they got them alone in their nightshirts. It was bad enough their going to be so sick without that they had Mrs Ape pitching into them too.

Seeing their discomfort, Mrs Ape softened and smiled. She was nothing if not ‘magnetic’.

‘Well, girls,’ she said, ‘I must be getting along. They say it’s going to be rough, but don’t you believe it. If you have peace in your hearts your stomach will look after itself, and remember if you do feel queer—sing. There’s nothing like it.’

‘Good–bye, Mrs Ape, and thank you,’ said the angels; they bobbed prettily, turned about and trooped aft to the second–class part of the ship. Mrs Ape watched them benignly, then, squaring her shoulders and looking (except that she had really no beard to speak of) every inch a sailor, strode resolutely forrard to the first–class bar.

Other prominent people were embarking, all very unhappy about the weather; to avert the terrors of sea–sickness they had indulged in every kind of civilized witchcraft, but they were lacking in faith.

Miss Runcible was there, and Miles Malpractice, and all the Younger Set. They had spent a jolly morning strapping each other’s tummies with sticking plaster (how Miss Runcible had wriggled).

The Right Honourable Walter Outrage, M.P., last week’s Prime Minister, was there. Before breakfast that morning (which had suffered in consequence) Mr Outrage had taken twice the maximum dose of a patent preparation of chloral, and losing heart later had finished the bottle in the train. He moved in an uneasy trance, closely escorted by the most public–looking detective sergeants. These men had been with Mr Outrage in Paris, and what they did not know about his goings on was not worth knowing, at least from a novelist’s point of view. (When they spoke about him to each other they called him ‘the Right Honourable Rape’, but that was more by way of being a pun about his name than a criticism of the conduct of his love affairs, in which, if the truth were known, he displayed a notable diffidence and the liability to panic.)