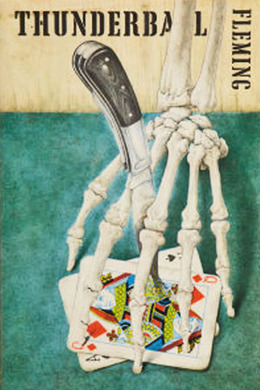 Upon M’s insistence, James Bond takes a two-week respite in a secluded natural health spa. But amid the bland teas, tasteless yogurts, and the spine stretcher the guests lovingly call “The Rack,” Bond stumbles onto the trail of a lethal man with ties to a new secret organization called SPECTRE. When SPECTRE hijacks two A-bombs, a frantic global search for the weapons ensues, and M’s hunch that the plane containing the bombs will make a clean drop into the ocean sends Bond to the Bahamas to investigate.On the island paradise, 007 finds a wealthy pleasure seeker’s treasure hunt and meets Domino Vitali, the gorgeous mistress of Emilio Largo, otherwise known as SPECTRE’s Number 1. But as powerful as Number 1 is, he works for someone else: Ernst Stavro Blofeld, a peculiar man with a deadly creative mind.

It was one of those days when it seemed to James Bond that all life, as someone put it, was nothing but a heap of six to four against.

To begin with he was ashamed of himself—a rare state of mind. He had a hangover, a bad one, with an aching head and stiff joints. When he coughed—smoking too much goes with drinking too much and doubles the hangover—a cloud of small luminous black spots swam across his vision like amoebae in pond water. The one drink too many signals itself unmistakably. His final whisky and soda in the luxurious flat in Park Lane had been no different from the ten preceding ones, but it had gone down reluctantly and had left a bitter taste and an ugly sensation of surfeit. And, although he had taken in the message, he had agreed to play just one more rubber. Five pounds a hundred as it’s the last one? He had agreed. And he had played the rubber like a fool. Even now he could see the queen of spades, with that stupid Mona Lisa smile on her fat face, slapping triumphantly down on his knave—the queen, as his partner had so sharply reminded him, that had been so infallibly marked with South, and that had made the difference between a grand slam redoubled (drunkenly) for him, and four hundred points above the line for the opposition. In the end it had been a twenty–point rubber, £100 against him—important money.

Again Bond dabbed with the bloodstained styptic pencil at the cut on his chin and despised the face that stared sullenly back at him from the mirror above the washbasin. Stupid, ignorant bastard! It all came from having nothing to do. More than a month of paper–work—ticking off his number on stupid dockets, scribbling minutes that got spikier as the weeks passed, and snapping back down the telephone when some harmless section officer tried to argue with him. And then his secretary had gone down with the flu and he had been given a silly, and, worse, ugly bitch from the pool who called him ‘sir’ and spoke to him primly through a mouth full of fruit stones. And now it was another Monday morning. Another week was beginning. The May rain thrashed at the windows. Bond swallowed down two Phensics and reached for the Enos. The telephone in his bedroom rang. It was the loud ring of the direct line with Headquarters.

James Bond, his heart thumping faster than it should have done, despite the race across London and a fretful wait for the lift to the eighth floor, pulled out the chair and sat down and looked across into the calm, grey, damnably clear eyes he knew so well. What could he read in them?

‘Good morning, James. Sorry to pull you along a bit early in the morning. Got a very full day ahead. Wanted to fit you in before the rush.’

Bond’s excitement waned minutely. It was never a good sign when M addressed him by his Christian name instead of by his number. This didn’t look like a job—more like something personal. There was none of the tension in M’s voice that heralded big, exciting news. M’s expression was interested, friendly, almost benign. Bond said something noncommittal.

‘Haven’t seen much of you lately, James. How have you been? Your health, I mean.’ M picked up a sheet of paper, a form of some kind, from his desk, and held it as if preparing to read.

Suspiciously, trying to guess what the paper said, what all this was about, Bond said, ‘I’m all right, sir.’

M said mildly, ‘That’s not what the MO thinks, James. Just had your last Medical. I think you ought to hear what he has to say.’

Bond looked angrily at the back of the paper. Now what the hell! He said with control, ‘Just as you say, sir.’

M gave Bond a careful, appraising glance. He held the paper closer to his eyes. ‘“This officer”,’ he read, ‘“remains basically physically sound. Unfortunately his mode of life is not such as is likely to allow him to remain in this happy state. Despite many previous warnings, he admits to smoking sixty cigarettes a day. These are of a Balkan mixture with a higher nicotine content than the cheaper varieties. When not engaged upon strenuous duty, the officer’s average daily consumption of alcohol is in the region of half a bottle of spirits of between sixty and seventy proof. On examination, there continues to be little definite sign of deterioration. The tongue is furred. The blood pressure a little raised at 160/90. The liver is not palpable. On the other hand, when pressed, the officer admits to frequent occipital headaches and there is spasm in the trapezius muscles and so–called ‘fibrositis’ nodules can be felt. I believe these symptoms to be due to this officer’s mode of life. He is not responsive to the suggestion that over–indulgence is no remedy for the tensions inherent in his professional calling and can only result in the creation of a toxic state which could finally have the effect of reducing his fitness as an officer”