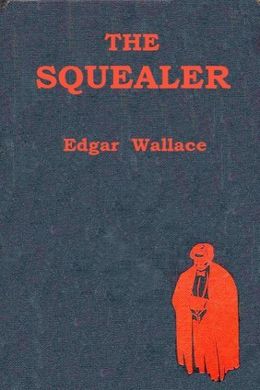 Both Scotland Yard and the criminal community of London are trying to discover the identity of “the Squealer”. This mysterious fence forces criminals to sell him their wares for a pittance. When some object, he “squeals” to the police. The story is based on the age-old saw ‘Thou shalt not blab’. The main question seems to be who is The Squealer, but you find out who he is well before the end and, as usual, it’s not who you think it is.

It was not a night that normal people would choose for a stroll across Putney Common. A night of wind and sleet and a cold that penetrated through soddened gloves. So dark it was, in spite of the lights set at long intervals along the highway, that Larry Graeme was compelled to use his electric torch whenever he came to a crossroad, or he would have stumbled over the curbing.

He was cosy enough in his long rubber coat and galoshes, though his big umbrella was more of a liability than an asset. Eventually, after a gust of wind that almost turned it inside out, he furled it. A little rain in the face was good for the complexion, he told himself humorously.

He glanced at the illuminated dial of his wrist watch. It wanted now a few minutes of the half–hour, and “The Big Fellow” was invariably punctual. Mean, but punctual. Larry had dealt with “The Big Fellow” before and had sworn never to repeat the experience. He was a driver of hard bargains, but he had the money and reduced risk to a minimum. This time he must pay full price—there were no ifs or buts about the exact value of the Van Rissik diamonds. The newspapers were full of the robbery; the underwriters had catalogued exactly, in figures beyond dispute, just the amount of money that every piece would fetch in the open market. And because of the very bigness of the deal, Larry had inserted the usual code advertisement:

Lost on Putney Common (in the direction of Wimbledon) at 10:30 on Thursday a small yellow handbag containing five letters of no value to anybody but owner.

The “yellow handbag with five letters” was the notification to “The Big Fellow” that jewellery was an offer. A “brown handbag” meant furs, a “white handbag” announced the fact that the advertiser had banknotes which he wished to dispose of. And the “five letters” indicated that the value of the property on offer ran to five figures.

And it was ten–thirty on Thursday night, and Larry was waiting expectantly on the Richmond road. Borne on the wind came the sound of a church clock striking the half hour.

Far away along the road, two dim lights appeared, drawing wider apart as they came nearer. Suddenly, the headlamps glowed blindingly, and the man waiting on the curb’s edge was held in the beam.

The car slowed, the long, rain–streaming bonnet came past him and stopped. From the dark interior of the coupé came a voice, a little harsh, more than a little querulous.

Larry strained his eyes to glimpse the figure inside. He guessed that the timely use of his hand lamp would not only be impolite but useless. “The Big Fellow” would hardly leave his face uncovered. But——

The hand that rested on the edge of the window was ungloved, and the third finger had a broken nail and a double white scar across the first knuckle—the hand was suddenly snatched away as though its owner were conscious of the scrutiny.

“You’ve said it. Worth thirty–two thousand pounds—hundred an’ sixty thousand dollars. And all of it easy to market. This Rissik woman put her money into stones—none of that fancy French setting that looks pretty and sells for dirt. I reckon five thousand’s the basement price——”

Larry breathed heavily through his nose.

“Have you got the stuff here?”

“I have not got the stuff here.” By his very emphasis the man in the car knew that he was lying. “And I’ll never have the stuff here till you talk business. There’s a Jewish gentleman in Maida Vale who’s offered me three thousand and would spring another. But I’d rather deal with you—you’re safer. See what I mean?”

“I’ll spring you to fifteen hundred, and that’s my last word,” said the occupant of the coupé. “I’ve got the money here, and you’ll be a wise man to take it.”

“I’m detaining you,” he said politely.

“We’re wasting both our times,” said Larry, and almost before the last word was uttered, the car shot forward, and before he could rightly see the number, its dimming red light was vanishing into the storm.

Larry relit the stub of his cigar and went in search of the small car he had left on the common.

“Shylock turns in his grave to–night,” was the only comment he made aloud.

Less than a week later, Larry Graeme came out of the Fiesole Restaurant in Oxford Street, and none observing him would imagine that he was anything more than what he appeared, a smart man about town approaching middle age, a connoisseur of good food and the creature comforts of life.”