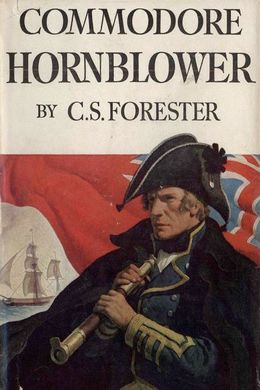 1812 and the fate of Europe lies in the hands of newly appointed Commodore Hornblower. Dispatched to northern waters, Hornblower will protect Britain’s Baltic interests and halt the advance of Napoleon’s empire into Sweden and Russia.\n\nFirst he must battle the terrible Baltic weather; fog, snow and icebound waterways; overcome Russian political and commercial intrigues; avoid the seductive charms of royalty as well as the deadly reach of assassins in the imperial palace; and contend with hostile armies and French privateers. With the fate of Europe balanced on a knife edge, the responsibility lies heavy on a Commodore’s shoulders.

Captain Sir Horatio Hornblower sat in his bath, regarding with distaste his legs dangling over the end. They were thin and hairy, and recalled to his mind the legs of the spiders he had seen in Central America. It was hard to think about anything except his legs, seeing how they were forced upon his attention by their position under his nose as he sat in this ridiculous bath; they hung out at one end while his body protruded from the water at the other. It was only the middle portion of him, from his waist to above his knees, which was submerged, and that was bent almost double. Hornblower found it irritating to have to take a bath in this fashion, although he tried not to allow it to irritate him, and he strove desperately to dismiss from his mind recollections of thousands of more comfortable baths taken on the deck of a ship, under a wash–deck pump which threw over him unlimited quantities of stimulating seawater. He seized his soap and flannel, and began viciously to wash those parts of himself above the surface, and as he did so water slopped in quantities over the side onto the polished oak floor of his dressing room. That meant trouble for a housemaid, and in Hornblower’s present mood he was glad to cause trouble.

He rose awkwardly to his feet in the bath, water flying in all directions, soaped and washed off the middle of himself, and yelled for Brown. Brown came in at once from the bedroom, although a good servant would have sensed his master’s mood and delayed for a second or two so as to be sworn at. He hung a warm towel over Hornblower’s shoulders, dexterously preventing the ends from dipping into the water as Hornblower stepped out of the soapy mess and walked across the floor, leaving upon it a trail of drops and wet footprints. Hornblower towelled himself and stared gloomily through the door into the bedroom at the clothes which Brown had laid out for him.

He would have to put on that damned suit of buff and blue, the varnished boots and the gold fob; he had never worn that suit before, and he had hated it when the tailor tried it on him, hated it when his wife admired it, and he supposed he would go on hating it for the rest of his days and still have to wear it. His hatred was a double one, firstly a simple blind unreasoning hatred, and secondly a hatred for a suit which he was quite sure did not properly set off his looks, making him appear absurd instead of merely plain. He pulled the two–guinea linen shirt over his head, and then with infinite trouble dragged the tight buff trousers up over his legs. They fitted him like a skin, and it was only when they were fully on, and Brown had slipped behind him and hauled the waistband taut, that he realised that he had not yet put on his stockings. To take the trousers off again would be to admit a mistake, and he refused to do so, ripping out another oath at Brown’s suggestion. Philosophically Brown knelt and rolled up the tight trouser legs, but they would not roll even as far as the knee, making it hopeless to try to put on the long stockings.

“Cut the tops off the damned things!” spluttered Hornblower.

Brown, kneeling on the floor, rolled a protesting eye up at him, but what he saw in Hornblower’s face cut short anything he had in mind to say. In disciplined silence Brown obeyed orders, bringing the scissors from the dressing table. Snip, snip, snip! The tops of the stockings fell to the floor, and Hornblower put his feet into the mutilated ends and felt the first satisfaction of the day as Brown rolled down the trousers over them. The Fates might be against him, but he would show them that he still had a will of his own, by God. He crammed his feet into the varnished boots and refrained from swearing at their tightness—he remembered guiltily that he had been weak with the fashionable bootmaker and had not insisted on comfort, not with his wife standing by to see that the dictates of fashion were obeyed.

He stumped across to the dressing table and tied his neckcloth, and Brown buckled his stock. The ridiculous thing brushed his ears as he turned his head and his neck felt as if it were being stretched to double its length. He had never been more uncomfortable in his life; he would never draw an easy breath while wearing this damned choker which Brummell and the Prince Regent had made fashionable. He slipped on the flowered waistcoat—blue sprigged with pink—and then the broadcloth coat, buff, with big blue buttons; the inside of the pocket flaps and the reverse of the lapels and collar were of a matching blue. For twenty years Hornblower had worn nothing except uniform, and the image that the mirror reflected back to his jaundiced eyes was unnatural, grotesque, ridiculous. Uniform was comforting—no one could blame him if it did not suit him, because he had to wear it