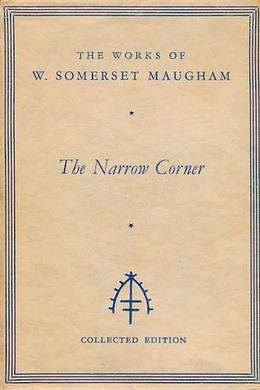 Island hoping across the South Pacific, the esteemed Dr. Saunders is offered passage by Captain Nichols and his companion Fred Blake, two men who appear unsavory, yet any means of transportation is hard to resist. The trip turns turbulent, however, when a vicious storm forces them to seek shelter on the remote island of Kanda. There these three men fall under the spell of the sultry and stunningly beautiful Louise, and their story spirals into a wicked tale of love, murder, jealousy, and suicide.\n\nA tense, exotic tale of love, jealousy, murder and suicide, which evolved from a passage in Maugham’s earlier masterpiece, The Moon and Sixpence.

All this happened a good many years ago.

Dr. Saunders yawned. It was nine o’clock in the morning. The day lay before him and he had nothing in the world to do. He had already seen a few patients. There was no doctor on the island and on his arrival such as had anything the matter with them seized the opportunity to consult him. But the place was not unhealthy and the ailments he was asked to cure were chronic, and he could do little; or they were trifling, and responded quickly to simple remedies. Dr. Saunders had practised for fifteen years in Fu-chou and had acquired a great reputation among the Chinese for his skill in dealing with the ills that affect the eye, and it was to remove a cataract for a rich Chinese merchant that he had come to Takana. This was an island in the Malay Archipelago, a long way down, and the distance from Fu-chou was so great that at first he had refused to go. But the Chinese, Kim Ching by name, was himself a native of that city and two of his sons lived there. He was well-acquainted with Dr. Saunders, and on his periodical visits to Fu-chou had consulted him on his failing sight. He had heard how the doctor, by what looked like a miracle, had caused the blind to see, and when in due course he found himself in such a state that he could only tell day from night, he was prepared to trust no one else to perform the operation which he was assured would restore his sight. Dr. Saunders had advised him to come to Fu-chou when certain symptoms appeared, but he had delayed, fearing the surgeon’s knife, and when at last he could no longer distinguish one object from another the long journey made him nervous and he bade his sons persuade the doctor to come to him.

Kim Ching had started life as a coolie, but by hard work and courage, aided by good luck, cunning and unscrupulousness, he had amassed a large fortune. At this time, a man of seventy, he owned large plantations on several islands; his own schooners fished for pearl, and he traded extensively in all the products of the Archipelago. His sons, themselves middle-aged men, went to see Dr. Saunders. They were his friends and patients. Two or three times a year they invited him to a grand dinner, when they gave him bird’s-nest soup, shark fins, bêche de mer and many other delicacies; singing girls engaged at a high price entertained the company with their performances; and everyone got tight. The Chinese liked Dr. Saunders. He spoke the dialect of Fu-chou with fluency. He lived, not like the other foreigners in the settlement, but in the heart of the Chinese city; he stayed there year in and year out and they had become accustomed to him. They knew that he smoked opium, though with moderation, and they knew what else there was to be known about him. He seemed to them a sensible man. It did not displease them that the foreigners in the community turned a cold shoulder on him. He never went to the club but to read the papers when the mail came in, and was never invited to dinner by them; they had their own English doctor and called in Dr. Saunders only when he was away on leave. But when they had anything the matter with their eyes they put their disapproval in their pockets and came down for treatment to the shabby little Chinese house over the river where Dr. Saunders dwelt happily amid the stenches of a native city. They looked about them with distaste as they sat in what was both the doctor’s consulting-room and parlour. It was furnished in the Chinese style but for a roll-top desk and a couple of rocking-chairs much the worse for wear. On the discoloured walls Chinese scrolls, presented by grateful patients, contrasted oddly with the sheet of cardboard on which were printed in different sizes and combinations the letters of the alphabet. It always seemed to them that there hung about the house faintly the acrid scent of opium.

But this the sons of Kim Ching did not notice, and if they had it would not have incommoded them. After the usual compliments had passed and Dr. Saunders had offered them cigarettes from a green tin, they set forth their business. Their father had bidden them say that now, too old and too blind to make the journey to Fu-chou, he desired Dr. Saunders to come to Takana and perform the operation which he had said two years before would be necessary. What would be his fee? The doctor shook his head. He had a large practice in Fu-chou and it was out of the question for him to absent himself for any length of time. He saw no reason why Kim Ching should not come there; he could come on one of his own schooners. If that did not suit him he could get a surgeon from Macassar, who was perfectly competent to perform the operation. The sons of Kim Ching, talking very volubly, explained that their father knew that there was no one who could do the miracles that Dr. Saunders could, and he was determined that no one else should touch him.