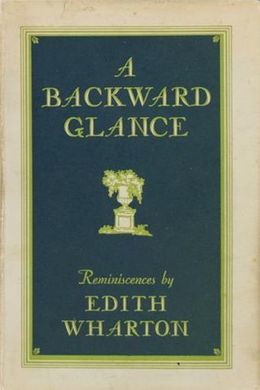 Edith Wharton, the first woman to win the Pulitzer Prize, vividly reflects on her public and private life in this stunning memoir. With richness and delicacy, it describes the sophisticated New York society in which Wharton spent her youth, and chronicles her travels throughout Europe and her literary success as an adult. Beautifully depicted are her friendships with many of the most celebrated artists and writers of her day, including her close friend Henry James.

It was on a bright day of midwinter, in New York. The little girl who eventually became me, but as yet was neither me nor anybody else in particular, but merely a soft anonymous morsel of humanity–this little girl, who bore my name, was going for a walk with her father. The episode is literally the first thing I can remember about her, and therefore I date the birth of her identity from that day.

She had been put into her warmest coat, and into a new and very pretty bonnet, which she had surveyed in the glass with considerable satisfaction. The bonnet (I can see it today) was of white satin, patterned with a pink and green plaid in raised velvet. It was all drawn into close gathers, with a bavolet in the neck to keep out the cold, and thick ruffles of silky blonde lace under the brim in front. As the air was very cold a gossamer veil of the finest white Shetland wool was drawn about the bonnet and hung down over the wearer’s round red cheeks like the white paper filigree over a Valentine; and her hands were encased in white woollen mittens.

One of them lay in the large safe hollow of her father’s bare hand; her tall handsome father, who was so warm-blooded that in the coldest weather he always went out without gloves, and whose head, with its ruddy complexion and intensely blue eyes, was so far aloft that when she walked beside him she was too near to see his face. It was always an event in the little girl’s life to take a walk with her father, and more particularly so today, because she had on her new winter bonnet, which was so beautiful (and so becoming) that for the first time she woke to the importance of dress, and of herself as a subject for adornment–so that I may date from that hour the birth of the conscious and feminine ME in the little girl’s vague soul.

The little girl and her father walked up Fifth Avenue: the old Fifth Avenue with its double line of low brown-stone houses, of a desperate uniformity of style, broken only–and surprisingly–by two equally unexpected features: the fenced-in plot of ground where the old Miss Kennedys’ cows were pastured, and the truncated Egyptian pyramid which so strangely served as a reservoir for New York’s water supply. The Fifth Avenue of that day was a placid and uneventful thoroughfare, along which genteel landaus, broughams and victorias, and more countrified vehicles of the “carry-all” and “surrey” type, moved up and down at decent intervals and a decorous pace. On Sundays after church the fashionable of various denominations paraded there on foot, in gathered satin bonnets and tall hats; but at other times it presented long stretches of empty pavement, so that the little girl, advancing at her father’s side, was able to see at a considerable distance the approach of another pair of legs, not as long but considerably stockier than her father’s. The little girl was so very little that she never got much higher than the knees in her survey of grown-up people, and would not have known, if her father had not told her, that the approaching legs belonged to his cousin Henry. The news was very interesting, because in attendance on Cousin Henry was a small person, no bigger than herself, who must obviously be Cousin Henry’s little boy Daniel, and therefore somehow belong to the little girl. So when the tall legs and the stocky ones halted for a talk, which took place somewhere high up in the air, and the small Daniel and Edith found themselves face to face close to the pavement, the little girl peered with interest at the little boy through the white woollen mist over her face. The little boy, who was very round and rosy, looked back with equal interest; and suddenly he put out a chubby hand, lifted the little girl’s veil, and boldly planted a kiss on her cheek. It was the first time–and the little girl found it very pleasant.

This is my earliest definite memory of anything happening to me; and it will be seen that I was wakened to conscious life by the two tremendous forces of love and vanity.

It may have been just after this memorable day–at any rate it was nearly at the same time–that a snowy-headed old gentleman with a red face and a spun-sugar moustache and imperial gave me a white Spitz puppy which looked as if its coat had been woven out of the donor’s luxuriant locks. The old gentleman, in whose veins ran the purest blood of Dutch Colonial New York, was called Mr. Lydig Suydam, and I should like his name to survive till this page has crumbled, for with his gift a new life began for me. The owning of my first dog made me into a conscious sentient person, fiercely possessive, anxiously watchful, and woke in me that long ache of pity for animals, and for all inarticulate beings, which nothing has ever stilled. How I loved that first “Foxy” of mine, how I cherished and yearned over and understood him! And how quickly he relegated all dolls and other inanimate toys to the region of my everlasting indifference!