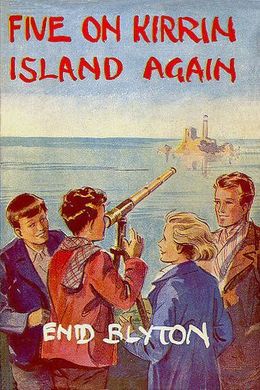 Uncle Quentin is busy working on Kirrin Island - and it’s all top secret! He doesn’t want anyone to visit. Not even the Famous Five. But the island is full of hiding places and Uncle Quentin is not alone. Someone wants to steal his ideas and ruin his plans. George is determined to find her father and save her island, no matter what dangers await. She can’t do it without the others - can they help her in time?

Anne was trying to do some of her prep. in a corner of the common–room when her cousin George came bursting in.

George was not a boy; she was a girl called Georgina, but because she had always wanted to be a boy she insisted on being called George. So George she was. She wore her curly hair cut short, and her bright blue eyes gleamed angrily now as she came towards Anne.

‘Anne! I’ve just had a letter from home—and what do you think? Father wants to go and live on my island to do some special work—and he wants to build a sort of tower or something in the castle yard!’

The other girls looked up in amusement, and Anne held out her hand for the letter that George was waving at her. Everyone knew about the little island off Kirrin Bay that belonged to George. Kirrin Island was a tiny place with an old ruined castle in the middle of it: the home of rabbits and gulls and jackdaws.

It had underground dungeons in which George and her cousins had had one or two amazing adventures. It had once belonged to George’s mother, and she had given it to George—and George was very fierce where her precious Kirrin Island was concerned! It was hers. Nobody else must live there, or even land there without her permission.

And now, dear me, here was her father proposing to go to her island, and even build some sort of workshop there! George was red with exasperation.

‘It’s just like grown–ups; they go and give you things and then act as though the things were theirs all the time. I don’t want Father living on my island, and building nasty messy sheds and things there.’

‘Oh George—you know your father is a very famous scientist, who needs to work in peace,’ said Anne, taking the letter. ‘Surely you can lend him your island for a bit?’

‘There are plenty of other places where he can work in peace,’ said George. ‘Oh dear—I was so hoping we could go and stay there in the Easter hols—take our boat there, and food and everything, just like we’ve done before. Now we shan’t be able to if Father really does go there.’

Anne read the letter. It was from George’s mother.

The letter then went on about other things, but Anne did not bother to read these. She looked at George.

‘Your father would talk to you about it first, and ask your permission, and see if you minded,’ said George, sulkily. ‘My father never does anything like that. He just does exactly as he likes without asking anybody anything. I really do think he might have written to me himself. He just puts my back up.’

‘You’ve got a back that is very easily put up, George,’ said Anne, laughing. ‘Don’t scowl at me like that. I’m not borrowing your island without your gracious permission.’

But George wouldn’t smile back. She took her letter and read it again gloomily. ‘To think that all my lovely holiday plans are spoilt!’ she said. ‘You know how super Kirrin Island is at Eastertime—all primroses and gorse and baby rabbits. And you and Julian and Dick were coming to stay, and we haven’t stayed together since last summer when we went caravanning.’

‘I know. It is hard luck!’ said Anne. ‘It would have been wizard to go and stay on the island these hols. But perhaps your father wouldn’t mind if we did? We needn’t disturb him.’

‘As if living on Kirrin Island with Father there would be the same as living there all by ourselves,’ said George, scornfully. ‘You know it would be horrid.’

Well yes—Anne didn’t think on the whole that Kirrin Island would be much fun with Uncle Quentin there. George’s father was such a hot–tempered, impatient man, and when he was in the middle of one of his experiments he was quite unbearable. The least noise upset him.”