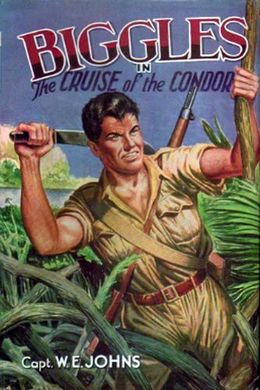 Biggles in the Cruise of the Condor

Biggles and Algy visit the elderly Dickpa only to find his English house under armed siege by a gang allied to Silas Blattner who are determined that Dickpa will give them the location of Incan treasure in Ecuador. Escaping from the house, Biggles returns in an aircraft to rescue his friends and they organise an expedition to South America to recover the treasure. Once in Brazil they use a flying boat, which they name Condor, to fly over the rainforest and to land on the rivers as they make their way towards the location of the treasure. Followed by a larger flying boat carrying Blattner’s men, our heroes locate the treasure cave only to find it empty before eventually stumbling across a lost city filled with treasure and the bodies of its long dead inhabitants. Returning to the Condor, a volcanic explosion preventing them taking all but a little treasure, they take off only to be confronted by Blattner’s plane which attempts to shoot them down.

“The trouble about civil life is that nothing ever seems to happen. What interest people got out of it before the war I can’t imagine; it must have been deadly dull. Even peace–time flying is so tame that I can’t get a kick out of it. No ack–ack, no nothing—just fly from here to there, and there you are. This peace seems a grim business to me; what do you think about it?”

The speaker paused and glanced moodily at his companion, as if seeking confirmation of these unusual sentiments. Slim, clean–shaven, and as straight as a lance, his carriage suggested military training that was half denied by the odd, wistful look on his pale, rather boyish face; tiny lines graven around the corners of his mouth and steady grey eyes gave him an expression of self–confidence and assurance beyond his years. His voice was crisp and decisive, and carried a hidden note of authority, as in one accustomed to making decisions and being obeyed.

His companion was about the same age, perhaps a trifle younger, but rather more stocky in build. His round, freckled face, surmounted by an untidy crop of fair hair, carried eyes that twinkled humorously at the slightest pretext. There was little about either of them to show that they had been two of the most brilliant air fighters in the war, who were known on the British side as nearly invincible, and on the German side as a combination to be avoided.

The speaker was, in fact, Major James Bigglesworth, D.S.O., M.C., popularly known as Biggles, who had commanded an R.A.F. squadron. Victor of thirty–five confirmed combats and many others unclaimed, he was known, at least by reputation, from Belgium to the Swiss frontier.

The other was his close friend and comrade–at–arms, Captain Algernon Lacey, more often simply known as Algy, who had finished the war as a flight–commander in the same squadron, with twenty victories signed up in his log–book.

“I agree,” he replied morosely, in answer to Biggles’s complaint; “but what can we do about it? Nothing! I expect we shall get used to it in time.”

“I shall pass out with boredom in the meantime,” replied Biggles with conviction. “That’s why I suggested coming down here to see Dickpa. He should be able to shoot us a good yarn or two.”

“Why on earth do you call your uncle Dickpa?”

Biggles laughed. “I don’t know,” he replied. “I used to call my guvnor ‘Pa’ when I was a toddler, and when his brother Dick came down to see him I just naturally called him Dickpa. I’ve never called him anything else. I haven’t seen him for years, because, as I told you, he’s an explorer and is very seldom in this country. Hearing he was back on one of his rare visits, I thought I’d slip along and see the old chap while I had the chance, and I thought you’d like to come along too. He’s got an interesting collection of stuff from all sorts of out–of–the–world places. There’s the house now, straight ahead.”

They walked slowly on down the leafy drive toward an old, red–bricked Elizabethan house, which they could now see through the trees, in silence, for it was midsummer and the sun was hot.

“Well, there are times when I positively ache to hear a gun go off,” went on Biggles presently. “Sheer habit, of course——”

Biggles stopped dead and stared, in wide–eyed amazement, in the direction from which the words had come. Algy also stopped, blinked, and shook his head like a prizefighter who had just intercepted a straight left to the point of the jaw.

“Looks as if my dreams are coming true,” muttered Biggles softly. “Can you see what I see, Algy, or shall I wake up in a minute?”

“Quit squarkin’ and do as you’re told,” growled a coarse nasal voice with a pungent American accent. The speaker, a tall, sun–burned man with a squint and a skin that had at some time been ravaged by smallpox, took a pace forward to emphasize his words. In his hand, held low on his hip, was a squat, wicked–looking automatic. “You heard me,” he went on, scowling evilly.

“Yes, I heard you,” replied Biggles evenly, eyeing the speaker with interest, “but aren’t you making a mistake? This is England, my friend, not America, and we have our own way of dealing with gun–thugs, as you’ll presently learn, I hope. If it’s money you want, you’ve made a boob, because I haven’t any.”

“Say, are you telling me?” snarled the man. “Step back the way you came, pronto; you’re not wanted here.”

Biggles looked at the American coldly and sat down on the stone wall that bordered the drive. “Let’s discuss this sensibly,” he said gently; and Algy, who had heard that tone of voice before, quivered instinctively in anticipation of the action he knew was coming.

“Talk nothing. On your feet, baby, and step out!”

Biggles sighed wearily. “Well, you seem to have—what do you call it?—the low–down on us,” he muttered”