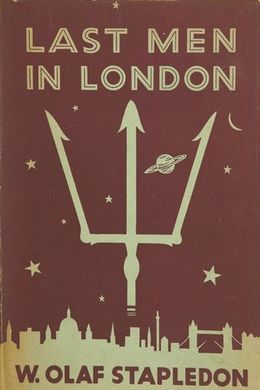 Last Men in London follows an Englishman named Paul, from childhood through service with an ambulance crew in the First World War (mirroring Stapledon’s own personal history) to adult life. Olaf Stapledon’s previous science-fiction novel, Last and First Men, envisioned two billion years of history, from the 1930s forward. In this companion piece, a super-intelligent narrator from the remote future investigates 20th-century life, entering Paul’s mind to observe his childhood, his service during World War I, and his life afterward.

Men and women of Earth! Brief Terrestrials, of that moment when the First Human Species hung in the crest of its attainment, wavelike, poised for downfall, I, a member of the last Human Species, address you for a second time from an age two thousand million years after your day, from an age as remotely future to you as the Earth’s beginning is remotely past.

In my earlier communication I told of the huge flux of events between your day and mine. I told of the rise and fall of many mankinds, of the spirit’s long desolations and brief splendours. I told how, again and again, after age–long sleep, man woke to see dimly what he should be doing with himself; how he strove accordingly to master his world and his own nature; and how, each time, circumstances or his own ignorance and impotence flung him back into darkness. I told how he struggled with invaders, and how he was driven from planet to planet, refashioning himself for each new world. I told, not only of his great vicissitudes, but also of the many and diverse modes of mind which he assumed in different epochs. I told how at length, through good fortune and skilled control, there was fashioned a more glorious mankind, the Eighteenth Human Species, my own. I hinted as best I might at the great richness and subtlety, the perfect harmony and felicity, of this last expression of the human spirit. I told of our discovery that our own fair planet must soon be destroyed with all the sun’s offspring; and of our exultant acceptance even of this doom. I told of the final endeavours which the coming end imposes on us.

In this my second communication I shall say little of my own world, and less of the ages that lie between us. Instead I shall speak mostly of your world and of yourselves. I shall try to show you yourselves through the eyes of the Last Men. Of myself and my fellow–workers, I shall speak, but chiefly as the link between your world and mine, as pioneering explorers in your world, and secret dwellers in your minds. I shall tell of the difficulties and dangers of our strange exploration of ages that to us are past, and of our still stranger influence upon past minds. But mostly I shall speak of men and women living in Europe in your twentieth Christian century, and of a great crisis that we observe in your world, a great opportunity which you tragically fail to grasp.

In relation to the long drama which I unfolded in my earlier communication it might well seem that even the most urgent and the most far–reaching events of your little sphere are utterly trivial. The rise and fall of your world–moving individuals, the flowering and withering of your nations, and all their blind, plant–like struggle for existence, the slow changes and sudden upheavals of your society, the archaic passions of your religious sects, and quick–changes of your fashionable thought, all seem, in relation to those aeons of history, no more than the ineffective gyrations of flotsam of the great river of humanity, whose direction is determined, not by any such superficial movements, but by the thrust of its own mass and the configuration of the terrain.

In the light of the stars what significance is there in such minute events as the defeat of an army, the issue of a political controversy, the success or failure of a book, the result of a football match? In that cold light even the downfall of a species is a matter of little importance. And the final extinction of man, after his two thousand million years of precarious blundering, is but the cessation of one brief tremulous theme in the great music of the cosmos.

Yet minute events have sometimes remarkable consequences. Again and again this was evident in the great story that I told. And now I am to describe events some of which, though momentary and minute in relation to the whole career of man, are yet in relation to yourselves long–drawn–out and big with destiny. In consequence of these momentary happenings, so near you, yet so obscure, man’s career is fated to be the weary succession of disasters and incomplete victories which I described on an earlier occasion.

But the account of these events, though it is in some sense the main theme of this book, is not its sole, not even its chief purpose. I shall say much of your baseness, much of your futility. But all that I say, if I say it well, and if the mind that I have chosen for my mouthpiece serves me adequately, shall be kindled with a sense of that beauty which, in spite of all your follies and treasons, is yours uniquely”