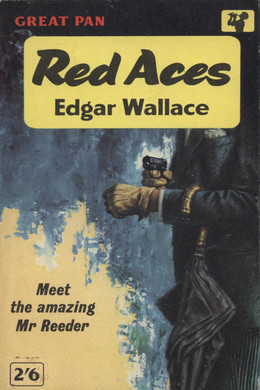 J. G. Reeder is a shabby little man with red hair and weak eyes. However, his extraordinary mind is rapier sharp. Red Aces is the fourth and last of Edgar Wallace’s JG Reeder books, featuring the diffident sleuth with the furled umbrella in three novelette-length adventures. Here are three thrilling episodes torn from his casebook. Red Aces about a man who gambles high and lives in fear; Kennedy the Con Man, reveals the impeccable mask stripped from a fiend, and finally The Case of Jo Attymer, a thoroughly intriguing mystery involving murder on London’s Thames. This is vintage Wallace, with no great depths but a good deal of humor and plenty of engaging goings-on along Wallace’s beloved Thames.

When a young man is very much in love with a most attractive girl he is apt to endow her with qualities and virtues which no human being has ever possessed. Yet at rare and painful intervals there enter into his soul certain wild suspicions, and in these moments he is inclined to regard the possibility that she may be guilty of the basest treachery and double dealing.

Everybody knew that Kenneth McKay was desperately in love. They knew it at the bank where he spent his days in counting other people’s money, and a considerable amount of his lunch hour writing impassioned and ill–spelt letters to Margot Lynn. His taciturn father, brooding over his vanished fortune in his gaunt riverside house at Marlow, may have employed the few moments he gave to the consideration of other people’s troubles in consideration of his son’s new interest. Probably he did not, for George McKay was entirely self–centred and had little thought but for the folly which had dissipated the money he had accumulated with such care, and the development of fantastical schemes for its recovery.

All day long, summer and winter, he sat in his study, a pack of cards before him, working out averages and what he called ‘inherent probabilities’, or at a small roulette wheel, where, alternately, he spun and recorded the winning numbers.

Kenneth went over to Beaconsfield every morning on his noisy motor–cycle and came back every night, sometimes very late, because Margot lived in London. She had a small flat where she could not receive him, but they dined together at the cheaper restaurants and sometimes saw a play. Kenneth was a member of an inexpensive London club which sheltered at least one sympathetic soul. Except Mr Rufus Machfield, the confident in question, he had no friends.

“And let me advise you not to make any here,” said Rufus.

He was a military–looking man of forty–five, and most people found him rather a bore, for the views which he expressed so vehemently, on all subjects from politics to religion, which are the opposite ends of the ethical pole, he had acquired that morning from the leading article of his favourite daily. Yet he was a genial person and a likeable man.

He had a luxurious flat in Park Lane, a French valet, a couple of hacks which he rode in the park, and no useful occupation.

“The Leffingham Club is cheap,” he said, “the food’s not bad, and it is near Piccadilly. Against that you have the fact that almost anybody who hasn’t been to prison can become a member——”

“You’re a gentleman and a public school man,” interrupted Mr Machfield a little sonorously. “You’re not rich, I admit——”

“Even I admit that,” said Ken, rubbing his untidy hair.

Kenneth was tall, athletic, as good–looking as a young man need be, or can be without losing his head about his face. He had called at the Leffingham that evening especially to see Rufus and confide his worries. And his worries were enormous. He looked haggard and ill; Mr Machfield thought it possible that he had not been sleeping very well. In this surmise he was right.

He had met Margot, had entertained the young people to dinner at his flat, and twice had invited them to a theatre party.

“We’ve had a row, Rufus. It began a week ago. For a long time her reticence has been bothering me. Why the devil couldn’t she tell me what she did for a living? I wouldn’t say this to a living soul but you—it is horribly disloyal to her, and yet it isn’t. I know that she has no money of her own, and yet she lives at the rate of a thousand a year. She says that she is secretary to a business man, but the office where she works is in her own name. And she isn’t there more than a few days a week and then only for a few hours.”

“She won’t tell you any more than that?”

Kenneth looked round the smokeroom. Except for a servant counting the cigars in a small mahogany cabinet, they were alone. He lowered his voice.

“She’ll never tell me any more … I’ve seen the man,” he said. “Margot meets him surreptitiously!”

Mr Machfield looked at him dubiously.

“Well, to tell you the truth, he’s elderly. It was queer how I came to see them at all. I was taking a ride round the country on Sunday morning. Margot told me that she couldn’t come to us—I asked her to lunch with us at Marlow—because she was going out to London. I went through Burnham and stopped to explore a little wood. As a matter of fact, I saw two animals fighting—I think they were stoats—and I went after them——”

“Stoats can be dangerous,” began Mr Machfield. “I remember once——”