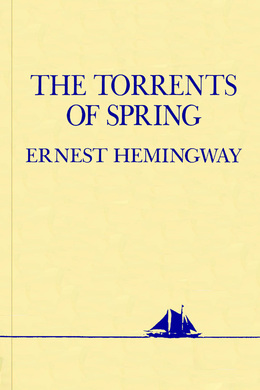 The Torrents of Spring

A hilarious parody of the Chicago school of literature. Poking fun at that “great race” of writers, it depicts a vogue that Hemingway himself refused to follow. In style and substance, it is a burlesque of Sherwood Anderson’s Dark Laughter, but in the course of the narrative, other literary tendencies associated with American and British writers akin to Anderson – such as D. H. Lawrence, James Joyce, and John Dos Passos – come in for satirical comment. A highly entertaining story, The Torrents of Spring offers a rare glimpse into Hemingway’s early career as a storyteller and stylist.

Yogi Johnson stood looking out of the window of a big pump–factory in Michigan. Spring would soon be here. Could it be that what this writing fellow Hutchinson had said, “If winter comes can spring be far behind?” would be true again this year? Yogi Johnson wondered. Near Yogi at the next window but one stood Scripps O’Neil, a tall, lean man with a tall, lean face. Both stood and looked out at the empty yard of the pump–factory. Snow covered the crated pumps that would soon be shipped away. Once the spring should come and the snow melt, workmen from the factory would break out the pumps from piles where they were snowed in and haul them down to the G. R. & I. station, where they would be loaded on flat–cars and shipped away. Yogi Johnson looked out of the window at the snowed–in pumps, and his breath made little fairy tracings on the cold windowpane. Yogi Johnson thought of Paris. Perhaps it was the little fairy tracings that reminded him of the gay city where he had once spent two weeks. Two weeks that were to have been the happiest weeks of his life. That was all behind him now. That and everything else.

Scripps O’Neil had two wives. As he looked out of the window, standing tall and lean and resilient with his own tenuous hardness, he thought of both of them. One lived in Mancelona and the other lived in Petoskey. He had not seen the wife who lived in Mancelona since last spring. He looked out at the snow–covered pump–yards and thought what spring would mean. With his wife in Mancelona Scripps often got drunk. When he was drunk he and his wife were happy. They would go down together to the railway station and walk out along the tracks, and then sit together and drink and watch the trains go by. They would sit under a pine–tree on a little hill that overlooked the railway and drink. Sometimes they drank all night. Sometimes they drank for a week at a time. It did them good. It made Scripps strong.

Scripps had a daughter whom he playfully called Lousy O’Neil. Her real name was Lucy O’Neil. One night, after Scripps and his old woman had been out drinking on the railroad line for three or four days, he lost his wife. He didn’t know where she was. When he came to himself everything was dark. He walked along the railroad track toward town. The ties were stiff and hard under his feet. He tried walking on the rails. He couldn’t do it. He had the dope on that all right. He went back to walking along the ties. It was a long way into town. Finally he came to where he could see the lights of the switch–yard. He cut away from the tracks and passed the Mancelona High School. It was a yellow–brick building. There was nothing rococo about it, like the buildings he had seen in Paris. No, he had never been in Paris. That was not he. That was his friend Yogi Johnson.

Yogi Johnson looked out of the window. Soon it would be time to shut the pump–factory for the night. He opened the window carefully, just a crack. Just a crack, but that was enough. Outside in the yard the snow had begun to melt. A warm breeze was blowing. A chinook wind the pump fellows called it. The warm chinook wind came in through the window into the pump–factory. All the workmen laid down their tools. Many of them were Indians.

The foreman was a short, iron–jawed man. He had once made a trip as far as Duluth. Duluth was far across the blue waters of the lake in the hills of Minnesota. A wonderful thing had happened to him there.

The foreman put his finger in his mouth to moisten it and held it up in the air. He felt the warm breeze on his finger. He shook his head ruefully and smiled at the men, a little grimly perhaps.

Silently for the most part, the workmen hung up their tools. The half–completed pumps were put away in their racks. The workmen filed, some of them talking, others silent, a few muttering, to the washroom to wash up.

Outside through the window came the sound of an Indian war–whoop.

Scripps O’Neil stood outside the Mancelona High School looking up at the lighted windows. It was dark and the snow was falling. It had been falling ever since Scripps could remember. A passer–by stopped and stared at Scripps. After all, what was this man to him? He went on. Scripps stood in the snow and stared up at the lighted windows of the High School. Inside there people were learning things. Far into the night they worked, the boys vying with the girls in their search for knowledge, this urge for the learning of things that was sweeping America