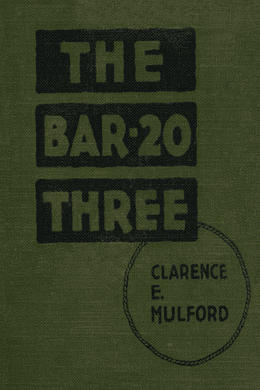 Hopalong Cassidy, Red Connors and Johnny nelson rode across the searing inferno of the Staked Plains and challenged Kane—who dominated the country like a colossus. They rode with vengeance in their hearts and with an implacable resolve to wipe Kane and his cohorts out. “Kane,” Johnny said, “you’ve been too big for too long. We’re cutting you down to size—with guns.” Johnny Nelson, Hopalong Cassidy’s young protégé, has finally got hitched, bought into a ranch, and run into rustlers, bank robbers, and thieves with murder on their mind. It is possible Johnny, Hoppy, and Red Conners, three men from the Bar-20, can bring an end to this reign of terror?

Idaho Norton, laughing heartily, backed out of the barroom of Quayle’s hotel and trod firmly on the foot of Ward Corwin, sheriff of the county, who was about to pass the door. Idaho wheeled, a casual apology trembling on his lips, to hear a biting, sarcastic flow of words, full of profanity, and out of all proportion to the careless injury. The sheriff’s coppery face was a deeper color than usual and bore an expression not pleasant to see. The puncher stepped back a pace, alert, lithe, balanced, the apology forgotten, and gazed insolently into the peace officer’s wrathful eyes.

“—an’ why don’t you look where yo’re steppin’? Don’t you know how to act when you come to town?” snarled the sheriff, finishing his remarks.

Idaho looked him over coolly. “I know how to act in any company, even yourn. Just now I ain’t actin’—I’m waitin’.”

The sheriff’s eyes glinted. “I got a good mind―”

“You ain’t got nothin’ of th’ sort,” cut in the puncher, contemptuously. “You ain’t got nothin’ good, except, mebby, yore reg’lar plea of self–defense. I’m sayin’ out loud that that ain’t no good, here an’ now; an’ I’m waitin’ to take it away from you an’ use it myself. You been trustin’ too cussed much to that nickel badge.”

Bill Trask, deputy, who had a reputation not to be overlooked, now took a hand from the rear, eager to add to his list of victims from any of that outfit. The puncher was between him and the sheriff, and hardly could watch them both. Trask gently shook his belt and said three unprintable words which usually started a fight, and then glared over his shoulder at a sudden interruption, tense and angry.

“Shut up, you!” said the voice, and he saw a two–gun stranger slouching away from the hotel wall. The deputy took him in with one quick glance and then his eyes returned to those of the stranger and rested there while a slight prickling sensation ran up his spine. He had looked into many angry eyes, and in many kinds of circumstances, but never before had his back given him a warning quite so plainly. He grew restless and wanted to look away, but dared not; and while he hung in the balance of hesitation the stranger spoke again. “Two to one ain’t fair, ‘specially with the lone man in th’ middle; but I’ll make th’ odds even, for I’m honin’ to claim self–defense, myself. It’s right popular. I saw it all—an’ I’m sayin’ you are three chumps to get all het up over a little thing like that. Mebby his toes are tender—but what of it? He ain’t no baby, leastawise he don’t look like one. An’ I’m tellin’ you, an’ yore badge–totin’ friend, that I know how to act, too.” A twinkle came into the hard, blue eyes. “But what’s th’ use of actin’ like four strange dogs?”

Somewhere in the little crowd a man laughed, others joined in and pushed between the belligerents; and in a minute the peace officers had turned the corner, Idaho was slowly walking toward the two–gun stranger and the crowd was going about its business.

“Have a drink?” asked the puncher, grinning as he pushed back his hat.

“Didn’t I just say that I knowed how to act?” chuckled the stranger, turning on his heel and following his companion through the door. “You must ‘a’ met them two before.”

“Too cussed often. What’ll you have? Make mine a cigar, too, Ed. No more liquor for me today—Corwin don’t forget.”

The bartender closed the box and slid it onto the backbar again. “No, he don’t,” he said. “An’ Trask is worse,” he added, looking significantly at the stranger, whose cigar was now going to his satisfaction and who was smilingly regarding Idaho, and who seemed to be pleased by the frank return scrutiny.

“You ain’t a stranger here no longer,” said Idaho, blowing out a cloud of smoke. “You got two good enemies, an’ a one–hoss friend. Stayin’ long?”

“About half an hour. I got a little bunch of cows on th’ drive west of here, an’ they ought to be at Twitchell an’ Carpenter’s corrals about now. Havin’ rid in to fix up bed an’ board for my little outfit, I’m now on my way to finish deliverin’ th’ herd. See you later if yo’re in town tonight.”

“I don’t aim to go back to th’ ranch till tomorrow,” replied Idaho, and he hesitated. “I’m sorry you horned in on that ruckus—there’s mebby trouble bloomin’ out of that for you. Don’t you get careless till yo’re a day’s ride away from this town. Here, before you go, meet Ed Doane. He’s one of th’ few white men in this runt of a town.”

The bartender shook hands across the bar. “Pleased to meet up with you, Mr.—Mr.―?”

“Nelson,” prompted the stranger. “How do you do, Mr. Doane?”

“Half an’ half,” answered the dispenser of liquids, and then waved a large hand at the smiling youth. “Shake han’s with Idaho Norton, who was never closer to Idaho than Parsons Corners, thirty miles northwest of here. Idaho’s a good boy, but shore impulsive. He’s spent most of his life practicin’ th’ draw, et cetery; an’ most of his money has went for ca’tridges.”