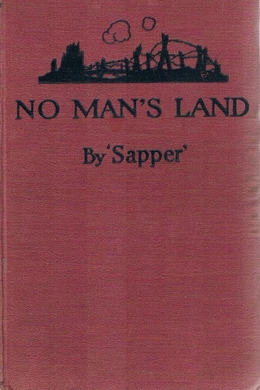 No Man’s Land is a collection of short stories of World War I. From horrific descriptions of the western front to a light hearted crime yarn. This is Sapper’s fourth collection of such stories. Contents:

It came suddenly when it did come, it may be remembered. Every one knew it was coming, and yet—it was all so impossible, so incredible. I remember Clive Draycott looking foolishly at his recall telegram in the club—he had just come home on leave from Egypt—and then brandishing it in front of my nose.

“My dear old boy,” he remarked peevishly, “it’s out of the question. I’m shooting on the 12th.”

But he crossed the next day to Boulogne.

It was a Sunday morning, and Folkestone looked just the same as it always did look. Down by the Pavilion Hotel the usual crowd of Knuts in very tight trousers and very yellow shoes, with suits most obviously bought off the peg, wandered about with ladies of striking aspect. Occasional snatches of conversation, stray gems of wit, scintillated through the tranquil August air, and came familiarly to the ears of a party of some half–dozen men who stood by a pile of baggage at the entrance to the hotel.

“Go hon, Bill; you hare a caution, not ’arf.” A shrill girlish giggle, a playful jerk of the “caution’s” arm, a deprecating noise from his manly lips, which may have been caused by bashfulness at the compliment, or more probably by the unconsumed portion of the morning Woodbine, and the couple moved out of hearing.

“I wonder,” said a voice from the group, “if we are looking on the passing of the breed.”

He was a tall, thin, spare fellow, the man who spoke; and amongst other labels on his baggage was one marked Khartoum. His hands were sinewy and his face was bronzed, while his eyes, brown and deep–set, held in them the glint of the desert places of the earth: the mark of the jungle where birds flit through the shadows like bars of glorious colour; the mark of the swamp where the ague mists lie dank and stagnant in the rays of the morning sun.

No one answered his remark; it seemed unnecessary, and each was busy with his own thoughts. What did the next few days hold in store for the world, for England, for him? The ghastly, haunting fear that possibly they held nothing for England gnawed at men’s hearts. It would be incredible, inconceivable; but impossible things had happened before.

Many must have felt that fear, but to none can it have been quite so personal, so hideously personal, as to the officers of the old Army and the Navy. To them it was as if their own honour were at stake, and I can see now a man opposite me almost sobbing with the fury and the shame of it when for a while we thought—the worst. But that was later.

“Time to go on board, gentlemen.”

Almost as beings from another world, they passed through the noisy throng, so utterly inconsequent, so absolutely ignorant and careless.

One cannot help wondering now just how that throng has answered the great call; how many lie in nameless graves, with the remnants of Ypres standing sentinel to their last sleep; how many have fought and cursed and killed in the mud–holes of the Somme; how many have chosen the other path, and even though they had no skill and aptitude to recommend them, are earning now their three and four pounds a week making munitions.

But they have answered the call, that throng and others like them; they have learned out of the book of life and death; and perhaps the tall man with the bronzed face might find the answer to his question could he see England to–day. Only he lies somewhere between Fletre and Meteren, and beside him are twenty men of his battalion. He took it in the fighting before the first battle of Ypres …

“I call it a bit steep.” A man in the Indian Cavalry broke the silence of the group who were leaning over the side watching the coast fade away. “In England two days after three years of it, and now here we are again. But the sun being over the yard–arm—what say you?”

With one last final look at the blue line astern, with one last involuntary thought—“Is it au revoir, or is it good–bye?”—they went below. The sun was indeed over the yard–arm, and the steward was a hospitable lad of cosmopolitan instincts….

“It is impossible to guarantee a ticket to Marseilles.” So the ticket vendor at Folkestone had informed them, and his pessimism was justified by future events.

The fun began at the Gare du Nord. From what I have since learned, I have often wished since that my mission in life had been to drive a fiacre in Paris during the early days of August ’14. A taxi conjures up visions too wonderful to contemplate; but even with the humble horse–bus I feel that I should now be able to afford a piano, or whatever it is the multi–millionaire munition–man buys without a quiver. I might even get the missus a fur coat”