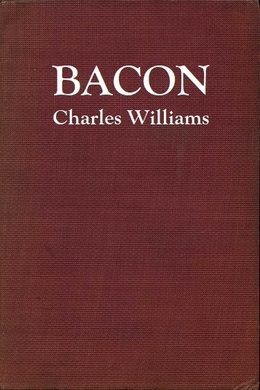 Williams’ biographical account of the life of Sir Francis Bacon was first published in 1933. He identified five major modes of thought that he believed permeated Bacon’s actions. William’s biography also includes self-reflective elements of theological discussion, which was typical of his writing style.

The fortune of Francis Bacon determined that he should be born on the twenty–second of January 1560/1, at York House in the Strand. It laid him in a cradle among the rulers of kingdoms; the names of empires were to be his daily business, but it interfused with them another and invisible empire which was to belong to his holidays and his nights, the empire of man over nature. His Fortune prepared in him an energy which has protracted itself through three centuries, saluted and studied by such men as Descartes and Leibniz, and (in another kind) Voltaire; an energy which, by the scope of its vision and the vital lucidity of its speech, was to make even his enemies his debtors. There was in his lifetime but one other power of equal and superior greatness; in the year of Francis’s birth John Shakespeare was chosen to serve Stratford as a chamberlain, while Nicholas Bacon held the Great Seal of England. Men have been so astonished at the separate glories of the two children that they have refused to believe that the richness of God could put them in the world together. Yet the one is in a sense the measure of the other. The mortal greatness of Francis lacked but one thing—he was not Shakespeare; his judgment lacked but one intelligence—he would not have supposed the subordination was on his side.

His Fortune gave him energy and lucidity, but also a body troubled by ill–health. It set his cradle close by the Throne, but on the left side. There had been but recently another cradle on the right, in which the slightly deformed body of his cousin, Robert Cecil, had lain. Offices and powers loomed below the Throne and over the cradles that stood, for the future as for the present, so near the purple. Francis’s father was Lord Keeper; his grandfather had been governor to royalty; his uncle was Secretary and presently to be Treasurer. The two cousins might look forward to succeeding to such offices, or (if they preferred) to accepting convenient titles, large estates, and enormous houses, now being built for them, such as Burleigh House or Theobalds. Gorhambury was begun two years after Francis’s birth. His Fortune seemed to promise him everything he could want at the cost of a little industry. In fact, for all his unceasing industry, it kept him waiting for nearly fifty years for what he did want, providing him with unsatisfactory substitutes meanwhile, and having at last given it, immediately took it back again.

He emerged from his cradle into the world, a distracted and dangerous world, about which the rumours and uncertainties of a new reign ran thickly, through London, and to and from the ports, and overseas to other centres—The Hague, Paris, Madrid, Rome. He beheld the gardens of York House, and Whitehall away on one side; on the other, towards Saint Paul’s, among similar palaces, Essex House, where his elder brother Anthony was to sit, thirty–five years later, writing and dictating letters to those other centres of diplomacy. He grew vividly aware of his brother, dutifully aware of his mother and his father, of great personages; among them, greatest of all, of the Queen. She was thirty–seven when he was born; one day, by his deceitful Fortune, he was led to her feet, and presented. She asked him how old he was. “I am three years younger than your Majesty’s happy reign,” he said, and maintained the same tactful “gravity and maturity” during his further youthful intercourse with her whenever she teased him with questions, so that she laughed and was pleased and called him “her young Lord Keeper.” In Saint James’s Fields, years afterwards, he knew of an echo; biography almost demands that he shall be supposed to have found it then, and that fancy shall invent and observe the young Lord Keeper listening to the echo in the Fields, as a mere convenient prophecy of his future as “privy councillor to King James and to Nature.” “Probable conjectures,” the Essays remark, “many times turn themselves into prophecies”; but any one who attended to the Essays could never write modern biography; let us pretend it happened. Add that there was, then or later, a conjurer, and all that was ever exposed of the Lord St. Alban’s childhood is known.

The household in which the small Francis walked was industrious and serious, concerned with statecraft and religion. He inherited both, with a difference. His father, Nicholas Bacon, after the death of his first wife, had married again, as wives and husbands so often did then; hardly any period of history is fuller of those second marriages which contributed to the making of estates and the enriching of the Families. Sir Nicholas chose a lady as distinguished in her way as he in his, who became the mother of two sons—Anthony and Francis. She was Anne Cooke, the daughter of Sir Anthony Cooke, governor of Edward VI, the prince to whom Sir John Cheke, the brother of William Cecil’s first wife, had taught Greek”