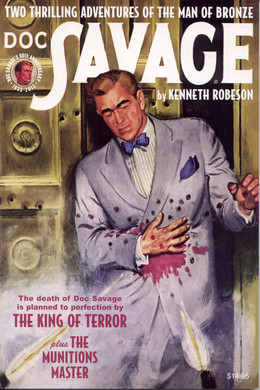 The King of Terror

A ruthless madman is plotting to rule the world. His ingenious plan involves an enigmatic woman, a psychotic surgeon, and a strange and powerful fog that muddles men’s minds. First, they have to kill Doc Savage. And Doc’s vengeance begins only after he is dead!

They killed Doc Savage on Saturday.

It was chilly that afternoon, with a little snow falling, and the snow as hard as salt particles. The wind had a hissing strength; it pounced on pedestrians and shook their overcoats and flapped their hat brims. Soldiers on the streets, and sailors in their winter–issue peajackets, blew steam on their fingers.

The man with the red hat and the blue armband with the yellow cross was not used to the cold, or to the bite that winter has in New York, close to the sea. He cursed the weather fluently, with the slightly accented voice of a man who can speak several languages.

His red hat and blue–yellow–cross armband, incidentally, was his own idea of a disguise. Dress in a bizarre outfit, he believed, and people wouldn’t be able to recognize you when you dressed in ordinary clothes.

He crossed Fifth Avenue and went into a restaurant, one of those white–enamel–and–chrome quick–eat places.

“Mug one and save the cow,” he told the waiter.

He grinned a little when he said that, for he liked to show his acquaintance with the local vernacular, in any part of the world where he happened to be.

Soon after he got his coffee black another man came in. This fellow looked very much a gentleman. He could have been a clerk in one of the insurance offices in the neighborhood, or a floorwalker in one of the big department stores, or anything else genteel.

“Hello, Francis,” he said. He slid onto a stool beside the other. “Really, Francis, you look a holy horror in that red hat and with that idiotic armband.”

Francis sugared his coffee. “Percy,” he said, “I have argued psychology with you before, so I will not do so now. I will just ask you one question: Do you think you could tell a peacock from a chicken if they both had no feathers?”

Percy sneered. “Give me a glass of milk,” he told the waiter, “with just a touch of chocolate in it.” His sneer was polite. Everything he did was polite. He had a floorwalker’s manner without ever having been a floorwalker.

“It is a bitter day,” Francis said. “I thoroughly detest a climate like this.”

The waiter went to the other end of the counter.

Francis said, “The new guns are in a car I rented, at the end of this block.”

“Have you tested them, Francis?”

“Oh, naturally. They are very good weapons. Better, even, I think, than the Thompson submachine gun. They are of the same caliber as the Thompson, but I believe their reliability is greater since the mechanism is simpler. It follows that it would be, don’t you think?”

“True,” Percy said. He consulted his wrist watch. He showed Francis the time. “I believe we should be going, don’t you?” he asked.

“By all means,” Francis agreed.

They shot Doc Savage to pieces in the long narrow lobby hall of a midtown skyscraper.

The building was one of the tallest in the city, in the world in fact, and the decorative motif of its lobby was subdued modernistic. The main lobby was a great vaulted room where chandeliers hung and where dozens, actually dozens, of elevators operated for the benefit of the tenants.

But Doc Savage’s private elevator was apart from the others. Once it had been in the same bank with the other elevators, but lately it had been changed, being now placed at the end of a small corridor that was a narrow thumb off the main lobby.

Percy and Francis took up a position at the mouth of this small blind hall, and there they waited.

“I do hope our calculations are sufficiently accurate that this will not be embarrassing,” Francis remarked.

“Yes, indeed,” Percy agreed. “It would be such a bother.”

They stood there, two fine, kind, polite, suave–looking gentlemen who wouldn’t be thought to have an idea more violent than what kind of a present to take the baby at home this evening, or, maybe, when was the army going to get around to needing them.

“Oh my, I feel conspicuous,” Francis declared. “Suppose we seem to conduct a bit of a business transaction, by way of making ourselves less obvious.”

So they acted like two gentlemen with a transaction. They made it good, actually, with Francis selling Percy an automobile which had three good tires, but one that unfortunately wasn’t so good. They had a good deal of give–and–take over the condition of the fourth tire, and what brand it was, how many miles were in it, and then Doc Savage came out of the elevator.

It was very skillful the way neither Percy nor Francis seemed aware that Doc Savage was stepping out of the private elevator.

“Ah, the time is one thirty,” said Francis.

“With the Scientific Club?”