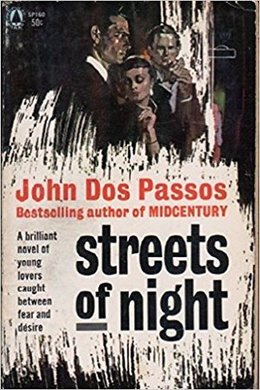 A novel begun in college and then reworked for seven years, this work mirrors the author’s experience at Harvard and in greater Boston. The novel reflects young Dos Passos’s interests in aestheticism, Greek and Roman culture, and Walt Whitman.

“Come along, Fanshaw, you’ve got to.”

“But I wouldn’t know what to say to them.”

“They’ll do the talking…. Look, you’ve got to come, date’s all made an’ everything.”

Cham Mason stood in his drawers in the middle of the floor, eagerly waving a shirt into which he was fitting cuff–links. He was a pudgy–faced boy with pink cheeks and wiry light hair like an Irish terrier’s. He leaned forward with pouting lips towards Fanshaw, who sat, tall and skinny, by the window, with one finger scratching his neck under the high stiff collar from which dangled a narrow necktie, blue, the faded color of his eyes.

“Well, what did you go and make it for?”

“Hell, Fanshaw, I couldn’t know that Al Winslow was going to get scarlet fever…. Most fellers ‘Id be glad of the chance. It isn’t everybody Phoebe Sweeting’ll go out with.”

“What could I do with two girls in a canoe? And she’s got to have her friend along. You don’t realize how respectable chorus girls are.”

“I never thought they were respectable at all.”

“That shows how little you know about it.”

Cham put on his shirt with peevish jerks and went into the next room. Fanshaw looked down at Bryce’s American Commonwealth that lay spread out on his knees and tried to go on reading: This decision of the Supreme Court, however…But why shouldn’t he? Fanshaw stretched himself yawning. The sunlight seeped through the brownish stencilled curtains and laid a heavy warm hand on his left shoulder. This decision of the Supreme … He looked down into Mount Auburn Street. It was June and dusty. From the room below came the singsong of somebody playing Sweet and Low on the mandolin. And mother needn’t know, and I’m in college … see life. A man with white pants on ran across the street waving a tennis racket. Stoddard, on the Lampoon, knows all the chorines.

Cham, fully dressed in a tweed suit, stood before him with set lips, blinking his eyes to keep from crying.

“Like when you have your photograph taken,” said Fanshaw, laughing shrilly.

“Gee, you’re a prince to do it…. I think Phoebe likes me…. It’s just that I’ve never had a chance to get her alone.”

Their eyes met suddenly. They both blushed and were silent. Fanshaw got to his feet and walked stiffly to the bookcase to put away his book.

“But Cham.” He was hoarse; he cleared his throat. “I don’t want to carry on with those girls. I don’t … I don’t do that sort of thing.”

“Don’t worry, they won’t eat you. I tell you they are very respectable girls. They don’t want to carry on with anybody. They like to have a good time, that’s all.”

“But all day seems so long.”

“We won’t start till eleven or so. Phoebe won’t be up. Just time to get acquainted.”

From far away dustily came the bored strokes of the college bell.

It was hot in the room. There was a faint smell of stale sweat from some soiled clothes that made a heap in the center of the floor. The strokes of the bell beat on Fanshaw’s ears with a dreary, accustomed weight.

“How about walking into town instead?”

Fanshaw picked up a notebook out of a patch of sun on the desk. The book was warm. The beam of sunlight was full of bright, lazy motes. Fanshaw put the book up to his mouth and yawned. Still yawning, he said:

“I don’t see why you took a course that came at such a damn–fool time.”

“Can’t argue now,” said Fanshaw going out the door and tramping down the scarred wooden stairs.

“You ask the clerk to call up and see if they’re ready,” said Cham. They stood outside the revolving door of the hotel, the way people linger shivering at the edge of a pool before diving in. Cham wore a straw hat and white flannel pants and carried a corded luncheon basket in one hand.

“But Cham, that’s your business. You ought to do that.” Fanshaw felt a stiff tremor in his voice. His hands were cold.

Fanshaw found himself engaged in the revolving door with Cham pushing him from behind. From rocking chairs in the lobby he could see the moonfaces of two drummers, out of which eyes like oysters stared at him. He was blushing; he felt his forehead tingle under his new tweed cap. The clock over the desk said fifteen of eleven. He walked firmly over to the desk and stood leaning over the registry book full of blotted signatures and dates. He cleared his throat. He could feel the eyes of the drummers, of the green bellboy, of people passing along the street boring into his back. At last the clerk came to him, a greyfaced man with a triangular mouth and eyeglasses, and said in a squeaky voice: