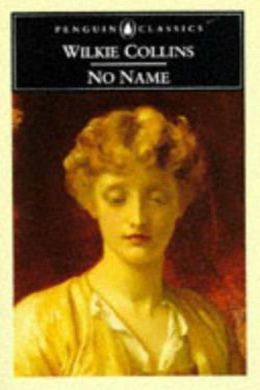 Condemned by Victorian critics as immoral, but regarded today as a novel of outstanding social insight, No Name shows William Wilkie Collins at the height of his literary powers. It is the story of two sisters, Magdalen and Norah, who discover after the deaths of their dearly beloved parents that their parents were not married at the time of their births. Disinherited and ousted from their estate, they must fend for themselves and either resign themselves to their fate or determine to recover their wealth by whatever means.

The hands on the hall–clock pointed to half–past six in the morning. The house was a country residence in West Somersetshire, called Combe–Raven. The day was the fourth of March, and the year was eighteen hundred and forty–six.

No sounds but the steady ticking of the clock, and the lumpish snoring of a large dog stretched on a mat outside the dining–room door, disturbed the mysterious morning stillness of hall and staircase. Who were the sleepers hidden in the upper regions? Let the house reveal its own secrets; and, one by one, as they descend the stairs from their beds, let the sleepers disclose themselves.

As the clock pointed to a quarter to seven, the dog woke and shook himself. After waiting in vain for the footman, who was accustomed to let him out, the animal wandered restlessly from one closed door to another on the ground–floor; and, returning to his mat in great perplexity, appealed to the sleeping family with a long and melancholy howl.

Before the last notes of the dog’s remonstrance had died away, the oaken stairs in the higher regions of the house creaked under slowly–descending footsteps. In a minute more the first of the female servants made her appearance, with a dingy woolen shawl over her shoulders—for the March morning was bleak; and rheumatism and the cook were old acquaintances.

Receiving the dog’s first cordial advances with the worst possible grace, the cook slowly opened the hall door and let the animal out. It was a wild morning. Over a spacious lawn, and behind a black plantation of firs, the rising sun rent its way upward through piles of ragged gray cloud; heavy drops of rain fell few and far between; the March wind shuddered round the corners of the house, and the wet trees swayed wearily.

Seven o’clock struck; and the signs of domestic life began to show themselves in more rapid succession.

The housemaid came down—tall and slim, with the state of the spring temperature written redly on her nose. The lady’s–maid followed—young, smart, plump, and sleepy. The kitchen–maid came next—afflicted with the face–ache, and making no secret of her sufferings. Last of all, the footman appeared, yawning disconsolately; the living picture of a man who felt that he had been defrauded of his fair night’s rest.

The conversation of the servants, when they assembled before the slowly lighting kitchen fire, referred to a recent family event, and turned at starting on this question: Had Thomas, the footman, seen anything of the concert at Clifton, at which his master and the two young ladies had been present on the previous night? Yes; Thomas had heard the concert; he had been paid for to go in at the back; it was a loud concert; it was a hot concert; it was described at the top of the bills as Grand; whether it was worth traveling sixteen miles to hear by railway, with the additional hardship of going back nineteen miles by road, at half–past one in the morning—was a question which he would leave his master and the young ladies to decide; his own opinion, in the meantime, being unhesitatingly, No. Further inquiries, on the part of all the female servants in succession, elicited no additional information of any sort. Thomas could hum none of the songs, and could describe none of the ladies’ dresses. His audience, accordingly, gave him up in despair; and the kitchen small–talk flowed back into its ordinary channels, until the clock struck eight and startled the assembled servants into separating for their morning’s work.

A quarter past eight, and nothing happened. Half–past—and more signs of life appeared from the bedroom regions. The next member of the family who came downstairs was Mr. Andrew Vanstone, the master of the house.

Tall, stout, and upright—with bright blue eyes, and healthy, florid complexion—his brown plush shooting–jacket carelessly buttoned awry; his vixenish little Scotch terrier barking unrebuked at his heels; one hand thrust into his waistcoat pocket, and the other smacking the banisters cheerfully as he came downstairs humming a tune—Mr. Vanstone showed his character on the surface of him freely to all men. An easy, hearty, handsome, good–humored gentleman, who walked on the sunny side of the way of life, and who asked nothing better than to meet all his fellow–passengers in this world on the sunny side, too. Estimating him by years, he had turned fifty. Judging him by lightness of heart, strength of constitution, and capacity for enjoyment, he was no older than most men who have only turned thirty.

“Thomas!” cried Mr. Vanstone, taking up his old felt hat and his thick walking stick from the hall table. “Breakfast, this morning, at ten. The young ladies are not likely to be down earlier after the concert last night.—By–the–by, how did you like the concert yourself, eh?