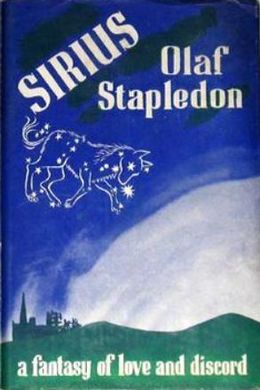 A Fantasy of Love and Discord

Sirius is Thomas Trelone’s great experiment - a huge, handsome dog with the brain and intelligence of a human being. Raised and educated in Trelone’s own family alongside Plaxy, his youngest daughter, Sirius is a truly remarkable and gifted creature. His relationship with the Trelones, particularly with Plaxy, is deep and close, and his inquiring mind ranges across the spectrum of human knowledge and experience. But Sirius isn’t human and the conflicts and inner turmoil that torture him cannot be resolved.

Plaxy and I had been lovers; rather uneasy lovers, for she would never speak freely about her past, and sometimes she withdrew into a cloud of reserve and despond. But often we were very happy together, and I believed that our happiness was striking deeper roots.

Then came her mother’s last illness, and Plaxy vanished. Once or twice I received a letter from her, giving no address, but suggesting that I might reply to her “care of the Post Office” in a village in North Wales, sometimes one, sometimes another. In temper these letters ranged from a perfunctory amiability to genuine longing to have me again. They contained mysterious references to “a strange duty,” which, she said, was connected with her father’s work. The great physiologist, I knew, had been engaged on very sensational experiments on the brains of the higher mammals. He had produced some marvellously intelligent sheep–dogs, and at the time of his death it was said that he was concerned with even more ambitious research. One of the colder of Plaxy’s letters spoke of an “unexpectedly sweet reward” in connection with her new duty, but in a more passionate one she cried out against “this exacting, fascinating, dehumanizing life.” Sometimes she seemed to be in a state of conflict and torture about something which she must not explain. One of these letters was so distraught that I feared for her sanity. I determined therefore to devote my approaching leave to walking in North Wales in the hope of finding her.

I spent ten days wandering from pub to pub in the region indicated by the addresses, asking everywhere if a Miss Trelone was known in the neighbourhood. At last, in Llan Ffestiniog, I heard of her. There was a young lady of that name living in a shepherd’s cottage on the fringe of the moor somewhere above Trawsfynydd. The local shopkeeper who gave me this information said with an air of mystery, “She is a strange young lady, indeed. She has friends, and I am one of them; but she has enemies.”

Following his directions, I walked for some miles along the winding Trawsfynydd road and then turned to the left up a lane. After another mile or so, right on the edge of the open moor, I came upon a minute cottage built of rough slabs of shale, and surrounded by a little garden and stunted trees. The door was shut, but smoke rose from a chimney. I knocked. The door remained shut. Peering through a window, I saw a typical cottage kitchen, but on the table was a pile of books. I sat down on a rickety seat in the garden and noted the neat rows of cabbages and peas. Away to my right, across the deep Cynfal gorge, was Ffestiniog, a pack of slate–grey elephants following their leader, the unsteepled church, down a spur of hill towards the valley. Behind and above stood the Moelwyn range.

I was smoking my second cigarette when I heard Plaxy’s voice in the distance. It was her voice that had first attracted me to her. Sitting in a café I had been enthralled by that sensitive human sound coming from some unknown person behind me. And now once more I heard but did not see her. For a moment I listened with delight to her speech, which, as I had often said, was like the cool sparkling talk of small waves on the pebbly shore of a tarn on a hot day.

I rose to meet her, but something strange arrested me. Interspersed with Plaxy’s remarks was no other human voice but a quite different sound, articulate but inhuman. Just before she came round the corner of the house she said, “But, my dear, don’t dwell on your handlessness so! You have triumphed over it superbly.” There followed a strange trickle of speech from her companion; then through the gate into the garden came Plaxy and a large dog.

She halted, her eyes wide with surprise, and (I hoped) with joy; but her brows soon puckered. Laying a hand on the dog’s head, she stood silent for a moment. I had time to observe that a change had come over her. She was wearing rather muddy corduroy trousers and a blue shirt. The same grey eyes, the same ample but decisive mouth, which had recently seemed to me to belie her character, the same shock of auburn, faintly carroty hair. But instead of a rather pale face, a ruddy brown one, and a complete absence of make–up. No lip–stick, even. The appearance of rude health was oddly contradicted by a darkness under the eyes and a tautness round the mouth. Strange how much one can notice in a couple of seconds, when one is in love!

Her hand deserted the dog’s head, and was stretched out to me in welcome. “Oh well,” she said smiling, “since you have nosed us out, we had better take you into our confidence.” There was some embarrassment in her tone, but also perhaps a ring of relief. “Hadn’t we, Sirius,” she added, looking down at the great dog.

Then for the first time I took note of this remarkable creature. He was certainly no ordinary dog”