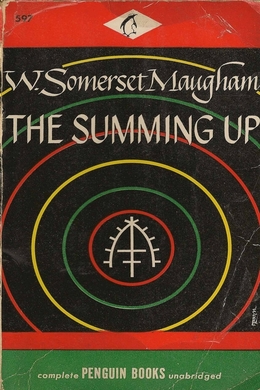 Autobiographical without being an autobiography, confessional without disclosing his private self, The Summing Up, written when Maugham was sixty-four, is an inimitable expression of a personal credo. It is not only a classic avowal of a professional author’s ideas about style, literarture, art, drama and philosophy, but also an illuminating insight into this great writer’s craft.

This is not an autobiography nor is it a book of recollections. In one way and another I have used in my writings whatever has happened to me in the course of my life. Sometimes an experience I have had has served as a theme and I have invented a series of incidents to illustrate it; more often I have taken persons with whom I have been slightly or intimately acquainted and used them as the foundation for characters of my invention. Fact and fiction are so intermingled in my work that now, looking back on it, I can hardly distinguish one from the other. It would not interest me to record the facts, even if I could remember them, of which I have already made a better use. They would seem, moreover, very tame. I have had a varied, and often an interesting, life, but not an adventurous one. I have a poor memory. I can never remember a good story till I hear it again and then I forget it before I have had a chance to tell it to somebody else. I have never been able to remember even my own jokes, so that I have been forced to go on making new ones. This disability, I am aware, has made my company less agreeable than it might otherwise have been.

I have never kept a diary. I wish now that during the year that followed my first success as a dramatist I had done so, for I met then many persons of consequence and it might have proved an interesting document. At that period the confidence of the people in the aristocracy and the landed gentry had been shattered by the muddle they had made of things in South Africa, but the aristocracy and the landed gentry had not realized this and they preserved their old self–confidence. At certain political houses I frequented they still talked as though to run the British Empire were their private business. It gave me a peculiar sensation to hear it discussed, when a general election was in the air, whether Tom should have the Home Office and whether Dick would be satisfied with Ireland. I do not suppose that anyone to–day reads the novels of Mrs. Humphry Ward, but dull though they may be, my recollection is that some of them give a very good picture of what the life of the ruling class was then. Novelists were still much concerned with it and even writers who had never known a lord thought it necessary to write largely about persons of rank. It would astonish anyone who now looked at the playbills of the day to see how many of the characters were titled. Managers thought that they attracted the public, and actors liked to portray them. But as the political importance of the aristocracy dwindled the public took less interest in it. Playgoers began to be ready to observe the actions of people of their own class, the well–to–do merchants and professional men who were then conducting the affairs of the country; and the rule, though never formulated, prevailed that the writer should not introduce persons of title unless they were essential to his theme. It was still impossible to interest the public in the lower classes. Novels and plays that dealt with them were very generally considered sordid. It will be curious to see if now that these classes have acquired political power the public at large will take the same interest in their lives that for so long it took in the lives of the titled, and for a while in those of the opulent bourgeoisie.

During this period I met persons who by their rank, fame or position might very well have thought themselves destined to become historical figures. I did not find them as brilliant as my fancy had painted them. The English are a political nation and I was often asked to houses where politics were the ruling interest. I could not discover in the eminent statesmen I met there any marked capacity. I concluded, perhaps rashly, that no great degree of intelligence was needed to rule a nation. Since then I have known in various countries a good many politicians who have attained high office. I have continued to be puzzled by what seemed to me the mediocrity of their minds. I have found them ill–informed upon the ordinary affairs of life and I have not often discovered in them either subtlety of intellect or liveliness of imagination. At one time I was inclined to think that they owed their illustrious position only to their gift of speech, for it must be next door to impossible to rise to power in a democratic community unless you can catch the ears of the public; and the gift of speech, as we know, is not often accompanied by the power of thought. But since I have seen statesmen who did not seem to me very clever conduct public affairs with reasonable success I cannot but think I was wrong: it must be that to govern a nation you need a specific talent and that this may very well exist without general ability