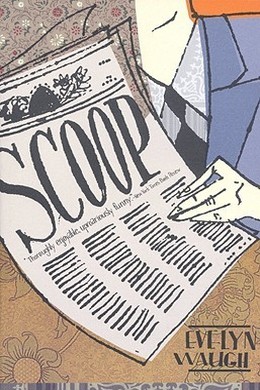 Lord Copper, newspaper magnate and proprietor of the “Daily Beast”, has always prided himself on his intuitive flair for spotting ace reporters. That is not to say he has not made the odd blunder, however, and may in a moment of weakness make another. Acting on a dinner-party tip from Mrs Algernon Smith, he feels convinced that he has hit on just the chap to cover a promising little war in the African Republic of Ishmaelia. One of Evelyn Waugh’s most exuberant comedies, Scoop is a brilliantly irreverent satire of Fleet Street and its hectic pursuit of hot news.

While still a young man, John Courteney Boot had, as his publisher proclaimed, ‘achieved an assured and enviable position in contemporary letters’. His novels sold fifteen thousand copies in their first year and were read by the people whose opinion John Boot respected. Between novels he kept his name sweet in intellectual circles with unprofitable but modish works on history and travel. His signed first editions sometimes changed hands at a shilling or two above their original price. He had published eight books—(beginning with a life of Rimbaud written when he was eighteen, and concluding, at the moment, with Waste of Time, a studiously modest description of some harrowing months among the Patagonian Indians)—of which most people who lunched with Lady Metroland could remember the names of three or four. He had many charming friends of whom the most valued was the lovely Mrs Algernon Stitch.

Like all in her circle John Boot habitually brought his difficulties to her for solution. It was with this purpose, on a biting–cold mid–June morning, that he crossed the Park and called at her house (a superb creation by Nicholas Hawksmoor modestly concealed in a cul–de–sac near Saint James’s Palace).

Algernon Stitch was standing in the hall; his bowler hat was on his head; his right hand, grasping a crimson, royally emblazoned despatch case, emerged from the left sleeve of his overcoat; his other hand burrowed petulantly in his breast pocket. An umbrella under his left arm further inconvenienced him. He spoke indistinctly, for he was holding a folded copy of the morning paper between his teeth.

The man who had opened the door came to his assistance, removed the umbrella and despatch case and laid them on the marble table; removed the coat and held it behind his master. John took the newspaper.

‘Thanks. Thanks very much. Much obliged. Come to see Julia, eh?’

From high overhead, down the majestic curves of the great staircase, came a small but preternaturally resonant voice.

‘Try not to be late for dinner, Algy; the Kents are coming.’

‘She’s upstairs,’ said Stitch. He had his coat on now and looked fully an English cabinet minister; long and thin, with a long, thin nose, and long, thin moustaches; the ideal model for continental caricaturists. ‘You’ll find her in bed,’ he said.

‘Your speech reads very well this morning.’ John was always polite to Stitch; everybody was; Labour members loved him.

‘Speech? Mine? Ah. Reads well, eh? Sounded terrible to me. Thanks all the same. Thanks very much. Much obliged.’

So Stitch went out to the Ministry of Imperial Defence and John went up to see Julia.

As her husband had told him, she was still in bed although it was past eleven o’clock. Her normally mobile face encased in clay was rigid and menacing as an Aztec mask. But she was not resting. Her secretary, Miss Holloway, sat at her side with account books, bills and correspondence. With one hand Mrs Stitch was signing cheques; with the other she held the telephone to which, at the moment, she was dictating details of the costumes for a charity ballet. An elegant young man at the top of a step–ladder was painting ruined castles on the ceiling. Josephine, the eight year old Stitch prodigy, sat on the foot of the bed construing her day’s passage of Virgil. Mrs Stitch’s maid, Brittling, was reading her the clues of the morning crossword. She had been hard at it since half–past seven.

Josephine rose from her lesson to kick John as he entered. ‘Boot,’ she said savagely, ‘Boot’ catching him first on one knee cap, then on the other. It was a joke of long standing.

Mrs Stitch turned her face of clay, in which only the eyes gave a suggestion of welcome, towards her visitor.

‘Come in,’ she said, ‘I’m just going out. Why twenty pounds to Mrs Beaver?’

‘That was for Lady Jean’s wedding present,’ said Miss Holloway.

‘I must have been insane. About the lion’s head for the centurion’s breastplate; there’s a beautiful one over the gate of a house near Salisbury, called Twisbury Manor; copy that as near as you can; ring up Country Life and ask for “back numbers”, there was a photograph of it about two years ago. You’re putting too much ivy on the turret, Arthur; the owl won’t show up unless you have him on the bare stone and I’m particularly attached to the owl. Munera, darling, like tumtiddy; always a short a in neuter plurals. It sounds like an anagram; see if “Terracotta” fits. I’m delighted to see you, John. Where have you been? You can come and buy carpets with me; I’ve found a new shop in Bethnal Green, kept by a very interesting Jew who speaks no English; the most extraordinary things keep happening to his sister”