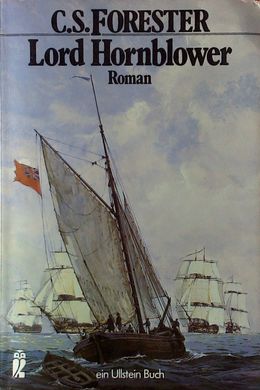 Weary of the war that he has waged nearly his entire life, Hornblower finds himself assigned an especially dangerous and dubious new task; to rescue a man he knows to be a tyrant from the mutiny of his crew in the Bay of the Seine. This risky adventure, coinciding with reports that the tide of war may be turning-as Wellington has swept over the Pyrenees and the Russians have reached the Rhine-propels Hornblower toward the heart of the French Empire, toward a fateful reunion with old friends, and toward the harrowing but glorious conclusion of his own battle with Napoleon.

The chapel stall of carved oak on which Sir Horatio Hornblower was sitting was most uncomfortable, and the sermon which the Dean of Westminster was preaching was deadly dull. Hornblower fidgeted like a child, and like a child he peered round the chapel and at the congregation to distract his mind from his physical troubles. Over his head soared the exquisite fan tracery of what Hornblower soberly decided was the most beautiful building in the world; there was something mathematically satisfactory in the way the spreading patterns met and re–met, a sort of inspired logic. The nameless workmen who had done that carving must have been far–sighted, creative men.

The sermon was still going on, and Hornblower feared that when it was finished there would be some more singing, more of those high–pitched noises from the surpliced choir–boys which would distress him painfully again, more painfully than the sermon or the oaken stall. This was the price he had to pay for having a ribbon and star to wear, for being a Knight of the Most Honourable Order of the Bath; as he was known to be on sick leave in England—and fully convalescent—he could not possibly evade attendance at this, the most important ceremonial of the Order. Certainly the chapel looked effective enough, the dull sunshine which made its way through the windows being reflected and multiplied into a soul–stirring glow by the knights’ crimson mantles and flashing orders. There was at least this to be said for this pomp and vanity; it was certainly beautiful in a strange, effective way, even without regard to historical associations. Maybe the stall on which he sat had in earlier years caused the same discomfort to Hawke or Anson; maybe Marlborough, in crimson and white similar to his own, had fidgeted and fretted through a similar sermon.

The important–looking person over there with a silver gilt crown on his head and velvet tabard embroidered in the royal arms was merely Bath King–at–Arms, some well–connected fellow who had this well–paid sinecure and could doubtless comfort himself, while sitting through the sermon, with the thought that he was earning his living by doing so once a year. Beside him was the Prince Regent, the Sovereign of the Order, his scarlet face at odds with the crimson of his mantle. And there were soldiers, generals and colonels, with whose faces he was unfamiliar. But elsewhere in the chapel there were men with whom he was proud to share the brotherhood of the Order—Lord St. Vincent, huge and grim, the man who took his fleet down into the heart of a Spanish squadron twice its strength; Duncan, who destroyed the Dutch Navy at Camperdown; and a dozen more of admirals and captains, some of them even junior to him in the Navy List—Lydiard, who captured the Pomona off Havannah; Samuel Hood, who commanded the Zealous at the Nile; and Yeo, who stormed the fort at El Muro. There was something pleasant and heartwarming at being a member of the same chivalrous Order as men like these—ridiculous, but true. And there were three times as many heroes as these, brother–knights also still at sea (for the ones present here were only those with shore appointments or on leave) making the final desperate effort to tear down the Napoleonic Empire. Hornblower felt a surge of patriotic emotion within him; his spirit soared, and then he incontinently began to analyse this wave of emotion and to wonder how much of it was due to the romantic beauty of his surroundings.

A uniformed naval lieutenant had made his way into the chapel, and stood hesitating for a moment before discovering Lord St. Vincent and hastening to him, offering him the large despatch (whose seals were already broken) which he held in his hand. No one was paying any attention to the sermon now—the cream of the Royal Navy were all craning round, peering at St. Vincent as he read the despatch, which had clearly arrived from the Admiralty at the other end of Whitehall. The Dean’s voice wavered, and then he rallied gamely, droning on to deaf ears, and ears which remained deaf for a long time, for St. Vincent, having read the despatch through once without any change of expression in his craggy face, immediately turned back to the beginning and read it through again. St. Vincent, who had so boldly risked the fate of England on a single prompt decision at the battle which gave him his title, was nevertheless not a man to plunge hastily into action where there was time to think.

He finished his second reading, folded the despatch, and then swept his gaze round the chapel. Two score Knights of the Bath stiffened with excitement and hoped to catch his eye. St. Vincent rose to his feet and clasped his crimson cloak about him; he threw a word to the waiting lieutenant, and then, seizing his plumed hat, proceeded to hobble stiffly out of the chapel