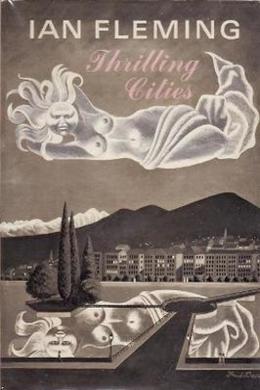 Ian Fleming’s world travels, interests, as well as his journalism and wartime experiences, lent authority to everything he wrote. In 1959, the Sunday Times commissioned Fleming to write a series of dispatches from the world’s most beguiling locales. The result was Thrilling Cities, a masterpiece of well-observed travelogue that stands ably alongside the author’s Bond canon.\n\nHere are Fleming’s highly personal observations of fourteen cities across Europe, Asia, and North America—from Vienna to Hong Kong to Chicago. At each stop, Fleming casts the guidebook aside, taking readers on an insider’s tour of everything from a Tokyo geisha house led by the world’s most beautiful women to a packed Las Vegas casino where fortunes ride on a roll of the dice, and beyond.

If you write thrillers, people think that you must live a thrilling life and enjoy doing thrilling things. Starting with these false assumptions, the Editorial Board of the Sunday Times repeatedly urged me to do something exciting and write about it and, at the end of October 1959, they came up with the idea that I should make a round trip of the most exciting cities of the world and describe them in beautiful, beautiful prose. This could be accomplished, they said, within a month.

Dubiously I discussed this project with Mr Leonard Russell, Features and Literary Editor of the paper. I said it was going to be very expensive and very exhausting, and that one couldn’t go round the world in thirty days and report either beautifully or accurately on great cities in approximately three days per city. I also said that I was the world’s worst sightseer and that I had often advocated the provision of roller–skates at the doors of museums and art galleries. I was also, I said, impatient of lunching at Government Houses and of visiting clinics and resettlement areas.

Leonard Russell was adamant. ‘We don’t want that sort of thing,’ he said. ‘In your James Bond books, even if people can’t put up with James Bond and those fancy heroines of yours, they seem to like the exotic backgrounds. Surely you want to pick up some more material for your stories? This is a wonderful opportunity.’

I objected that my stories were fiction and the sort of things that happened to James Bond didn’t happen in real life.

So, wishing privately to see the world, however rapidly, while it was still there to see, I purchased a round–the–world air ticket for £803 19s. 2d., drew £500 in travellers’ cheques from the Chief Accountant and had several ‘shots’ which made me feel sore and rather dizzy. Then, on November 2nd, armed with a sheaf of visas, a round–the–world suit with concealed money pockets, one suitcase in which, as one always does, I packed more than I needed, and my typewriter, I left humdrum London for the thrilling cities of the world—Hong Kong, Macao, Tokyo, Honolulu, Los Angeles, Las Vegas, Chicago, New York.

On that soft, grey morning, Comet G/ADOK shot up so abruptly from the north–south runway of London Airport that the beige curtains concealing the lavatories and the cockpit swayed back into the cabin at an angle of fifteen degrees. The first soaring leap through the overcast was to ten thousand feet. There was a slight tremor as we went through the lower cloud base and another as we came out into the brilliant sunshine.

We climbed on another twenty thousand feet into that world above the cotton–wool cloud carpet where it is always a beautiful day. The mind adjusted itself to the prospect of twenty–four hours of this sort of thing—the hot face and rather chilly feet, eyes that smart with the outside brilliance, the smell of Elizabeth Arden and Yardley cosmetics that B.O.A.C. provide for their passengers, the varying whine of the jets, the first cigarette of an endless chain of smoke, and the first conversational gambits exchanged with the seat–fellow who, in this instance, was a pleasant New Zealander with a flow of aboriginal jokes and nothing else to do but talk the whole way to Hong Kong.

Zürich came and the banal beauty of Switzerland, then the jagged sugar–icing of the Alps, the blue puddles of the Italian lakes and the snow melting down towards the baked terrazza of the Italian plains. My companion commented that we had a good seat ‘viewwise’, not like the other day when he was crossing the Atlantic and an American woman came aboard and complained when she found herself sitting over the wing. ‘It’s always the same,’ she had cried. ‘When I get on an aircraft all I can see outside is wing.’ The American next to her had said, ‘Listen, Ma’am, you go right on seeing that wing. Start worrying when you can’t see it any longer.’

Below us Venice was an irregular brown biscuit surrounded by the crumbs of her islands. A straggling crack in the biscuit was the Grand Canal. At six hundred miles an hour, the Adriatic and the distant jagged line of Yugoslavia were gone in thirty minutes. Greece was blanketed in cloud and we were out over the Eastern Mediterranean in the time it took to consume a cupful of B.O.A.C. fruit salad. (My neighbour told me he liked sweet things. When I got to Los Angeles I must be sure and not forget to eat poison–berry pie.)

It was now two o’clock in the afternoon, G.M.T., but we were hastening towards the night and dusk came to meet us. An hour more of slow, spectacular sunset and blue–black night and then Beirut showed up ahead—a sprawl of twinkling hundreds–and–thousands under an Arabian Nights new moon that dived down into the oil lands as the Comet banked to make her landing