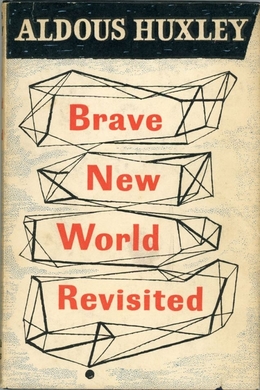 When the novel Brave New World first appeared in 1932, its shocking analysis of a scientific dictatorship seemed a projection into the remote future. Here, in one of the most important and fascinating books of his career, Aldous Huxley uses his tremendous knowledge of human relations to compare the modern-day world with his prophetic fantasy. He scrutinizes threats to humanity, such as overpopulation, propaganda, and chemical persuasion, and explains why we have found it virtually impossible to avoid them. Brave New World Revisited is a trenchant plea that humankind should educate itself for freedom before it is too late. Brave New World Revisted is not a reissue or revision of the novel Brave New World, it is a nonfiction exploration of its themes.

In 1931, when Brave New World was being written, I was convinced that there was still plenty of time. The completely organized society, the scientific caste system, the abolition of free will by methodical conditioning, the servitude made acceptable by regular doses of chemically induced happiness, the orthodoxies drummed in by nightly courses of sleep–teaching—these things were coming all right, but not in my time, not even in the time of my grandchildren. I forget the exact date of the events recorded in Brave New World; but it was somewhere in the sixth, or seventh century A.F. (After Ford). We who were living in the second quarter of the twentieth century A.D. were the inhabitants, admittedly, of a gruesome kind of universe; but the nightmare of those depression years was radically different from the nightmare of the future, described in Brave New World. Ours was a nightmare of too little order; theirs, in the seventh century A.F., of too much. In the process of passing from one extreme to the other, there would be a long interval, so I imagined, during which the more fortunate third of the human race would make the best of both worlds—the disorderly world of liberalism and the much too orderly Brave New World where perfect efficiency left no room for freedom or personal initiative.

Twenty–seven years later, in this third quarter of the twentieth century A.D., and long before the end of the first century A.F., I feel a good deal less optimistic than I did when I was writing Brave New World. The prophecies made in 1931 are coming true much sooner than I thought they would. The blessed interval between too little order and the nightmare of too much has not begun and shows no sign of beginning. In the West, it is true, individual men and women still enjoy a large measure of freedom. But even in those countries that have a tradition of democratic government, this freedom and even the desire for this freedom seem to be on the wane. In the rest of the world freedom for individuals has already gone, or is manifestly about to go. The nightmare of total organization, which I had situated in the seventh century After Ford, has emerged from the safe, remote future and is now awaiting us, just around the next corner.

George Orwell’s 1984 was a magnified projection into the future of a present that contained Stalinism and an immediate past that had witnessed the flowering of Nazism. Brave New World was written before the rise of Hitler to supreme power in Germany and when the Russian tyrant had not yet got into his stride. In 1931 systematic terrorism was not the obsessive contemporary fact which it had become in 1948, and the future dictatorship of my imaginary world was a good deal less brutal than the future dictatorship so brilliantly portrayed by Orwell. In the context of 1948, 1984 seemed dreadfully convincing. But tyrants, after all, are mortal and circumstances change. Recent developments in Russia and recent advances in science and technology have robbed Orwell’s book of some of its gruesome verisimilitude. A nuclear war will, of course, make nonsense of everybody’s predictions. But, assuming for the moment that the Great Powers can somehow refrain from destroying us, we can say that it now looks as though the odds were more in favor of something like Brave New World than of something like 1984.

In the light of what we have recently learned about animal behavior in general, and human behavior in particular, it has become clear that control through the punishment of undesirable behavior is less effective, in the long run, than control through the reinforcement of desirable behavior by rewards, and that government through terror works on the whole less well than government through the non–violent manipulation of the environment and of the thoughts and feelings of individual men, women and children. Punishment temporarily puts a stop to undesirable behavior, but does not permanently reduce the victim’s tendency to indulge in it. Moreover, the psycho–physical by–products of punishment may be just as undesirable as the behavior for which an individual has been punished. Psychotherapy is largely concerned with the debilitating or anti–social consequences of past punishments.

The society described in 1984 is a society controlled almost exclusively by punishment and the fear of punishment. In the imaginary world of my own fable punishment is infrequent and generally mild. The nearly perfect control exercised by the government is achieved by systematic reinforcement of desirable behavior, by many kinds of nearly non–violent manipulation, both physical and psychological, and by genetic standardization. Babies in bottles and the centralized control of reproduction are not perhaps impossible; but it is quite clear that for a long time to come we shall remain a viviparous species breeding at random