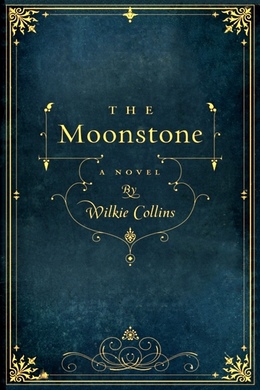 Stolen from the forehead of a Hindu idol, the dazzling gem known as “The Moonstone” resurfaces at a birthday party in an English country home–with an enigmatic trio of watchful Brahmins hot on its trail. Laced with superstitions, suspicion, humor, and romance, this mystery draws readers into a compelling tale with twists and turns ranging from sleepwalking to experimentation with opium. The suspense and drama is heightened as the narrative passes from one colorful character to the next. Wilkie Collins’ masterpiece is particularly distinguished by the appearance of Sergeant Cuff, a prototype of the English detective hero and the harbinger of a popular tradition of sleuthing.

In the first part of Robinson Crusoe, at page one hundred and twenty-nine, you will find it thus written:

“Now I saw, though too late, the Folly of beginning a Work before we count the Cost, and before we judge rightly of our own Strength to go through with it.”

Only yesterday, I opened my Robinson Crusoe at that place. Only this morning (May twenty-first, Eighteen hundred and fifty), came my lady’s nephew, Mr. Franklin Blake, and held a short conversation with me, as follows:–

“Betteredge,” says Mr. Franklin, “I have been to the lawyer’s about some family matters; and, among other things, we have been talking of the loss of the Indian Diamond, in my aunt’s house in Yorkshire, two years since. Mr. Bruff thinks as I think, that the whole story ought, in the interests of truth, to be placed on record in writing–and the sooner the better.”

Not perceiving his drift yet, and thinking it always desirable for the sake of peace and quietness to be on the lawyer’s side, I said I thought so too. Mr. Franklin went on.

“In this matter of the Diamond,” he said, “the characters of innocent people have suffered under suspicion already–as you know. The memories of innocent people may suffer, hereafter, for want of a record of the facts to which those who come after us can appeal. There can be no doubt that this strange family story of ours ought to be told. And I think, Betteredge, Mr. Bruff and I together have hit on the right way of telling it.”

Very satisfactory to both of them, no doubt. But I failed to see what I myself had to do with it, so far.

“We have certain events to relate,” Mr. Franklin proceeded; “and we have certain persons concerned in those events who are capable of relating them. Starting from these plain facts, the idea is that we should all write the story of the Moonstone in turn–as far as our own personal experience extends, and no farther. We must begin by showing how the Diamond first fell into the hands of my uncle Herncastle, when he was serving in India fifty years since. This prefatory narrative I have already got by me in the form of an old family paper, which relates the necessary particulars on the authority of an eye-witness. The next thing to do is to tell how the Diamond found its way into my aunt’s house in Yorkshire, two years ago, and how it came to be lost in little more than twelve hours afterwards. Nobody knows as much as you do, Betteredge, about what went on in the house at that time. So you must take the pen in hand, and start the story.”

In those terms I was informed of what my personal concern was with the matter of the Diamond. If you are curious to know what course I took under the circumstances, I beg to inform you that I did what you would probably have done in my place. I modestly declared myself to be quite unequal to the task imposed upon me–and I privately felt, all the time, that I was quite clever enough to perform it, if I only gave my own abilities a fair chance. Mr. Franklin, I imagine, must have seen my private sentiments in my face. He declined to believe in my modesty; and he insisted on giving my abilities a fair chance.

Two hours have passed since Mr. Franklin left me. As soon as his back was turned, I went to my writing desk to start the story. There I have sat helpless (in spite of my abilities) ever since; seeing what Robinson Crusoe saw, as quoted above–namely, the folly of beginning a work before we count the cost, and before we judge rightly of our own strength to go through with it. Please to remember, I opened the book by accident, at that bit, only the day before I rashly undertook the business now in hand; and, allow me to ask–if THAT isn’t prophecy, what is?

I am not superstitious; I have read a heap of books in my time; I am a scholar in my own way. Though turned seventy, I possess an active memory, and legs to correspond. You are not to take it, if you please, as the saying of an ignorant man, when I express my opinion that such a book as Robinson Crusoe never was written, and never will be written again. I have tried that book for years–generally in combination with a pipe of tobacco–and I have found it my friend in need in all the necessities of this mortal life. When my spirits are bad–Robinson Crusoe. When I want advice–Robinson Crusoe. In past times when my wife plagued me; in present times when I have had a drop too much–Robinson Crusoe. I have worn out six stout Robinson CrusoeS with hard work in my service. On my lady’s last birthday she gave me a seventh. I took a drop too much on the strength of it; and Robinson Crusoe put me right again. Price four shillings and sixpence, bound in blue, with a picture into the bargain.

Still, this don’t look much like starting the story of the Diamond–does it? I seem to be wandering off in search of Lord knows what, Lord knows where. We will take a new sheet of paper, if you please, and begin over again, with my best respects to you.