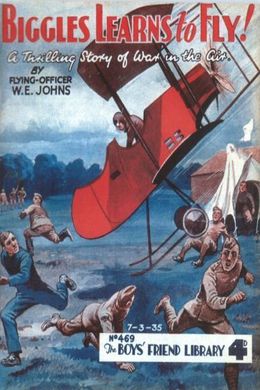 This is the story of the very beginning - of the Air Service and of Biggles. It’s the First World War and Biggles is just 17. The planes are primitive; combat tactics are non-existent; the only form of communication for pilots and their gunners is by hand signals. They are reliant on the skill of their fellow crew, their wit, and, above all else, their bravery. In hostile enemy skies, where instinct and fast reactions are everything, Biggles must learn to be a real fighter pilot, or die. But does he have what it takes?

One fine late September morning in the war-stricken year of 1916, a young officer, in the distinctive uniform of the Royal Flying Corps, appeared in the doorway of one of the long, low, narrow wooden huts which, mushroom-like, had sprung up all over England during the previous eighteen months. He paused for a moment to regard a great open expanse that stretched away as far as he could see before him in the thin autumn mist that made everything outside a radius of a few hundred yards seem shadowy and vague.

There was little about him to distinguish him from thousands of others in whose ears the call to arms had not sounded in vain, and who were doing precisely the same thing in various parts of the country. His uniform was still free from the marks of war that would eventually stain it. His Sam Browne belt still squeaked slightly when he moved, like a pair of new boots.

There was nothing remarkable, or even martial, about his physique; on the contrary, he was slim, rather below average height, and delicate-looking. A wisp of fair hair protruded from one side of his rakishly tilted R.F.C. cap; his eyes, now sparkling with pleasurable anticipation, were what is usually called hazel. His features were finely cut, but the squareness of his chin and the firm line of his mouth revealed a certain doggedness, a tenacity of purpose, that denied any suggestion of weakness. Only his hands were small and white, and might have been those of a girl.

His youthfulness was apparent. He might have reached the eighteen years shown on his papers, but his birth certificate, had he produced it at the recruiting office, would have revealed that he would not attain that age for another eleven months. Like many others who had left school to plunge straight into the war, he had conveniently ‘lost’ his birth certificate when applying for enlistment, nearly three months previously.

A heavy, hair-lined leather coat, which looked large enough for a man twice his size, hung stiffly over his left arm. In his right hand he held a flying-helmet, also of leather but lined with fur, a pair of huge gauntlets, with coarse, yellowish hair on the backs, and a pair of goggles.

He started as the silence was shattered by a reverberating roar which rose to a mighty crescendo and then died away to a low splutter. The sound, which he knew was the roar of an aero-engine, although he had never been so close to one before, came from a row of giant structures that loomed dimly through the now-dispersing mist, along one side of the bleak expanse upon which he gazed with eager anticipation. There was little enough to see, yet he had visualized that flat area of sandy soil, set with short, coarse grass, a thousand times during the past two months while he had been at the ‘ground’ school. It was an aerodrome, or, to be more precise, the aerodrome of No. 17 Flying Training School, which was situated near the village of Settling, in Norfolk. The great, darkly looming buildings were the hangars that housed the extraordinary collection of hastily built aeroplanes which at this period of the first Great War were used to teach pupils the art of flying.

A faint smell was borne to his nostrils, a curious aroma that brought a slight flush to his cheeks. It was one common to all aerodromes, a mingling of petrol, oil, dope, and burnt gases, and which, once experienced, was never forgotten.

Figures, all carrying flying-kit, began to emerge from other huts and hurry towards the hangars, where strange-looking vehicles were now being wheeled out on to a strip of concrete that shone whitely along the front of the hangars for their entire length. After a last appraising glance around, the new officer set off at a brisk pace in their direction.

A chilly breeze had sprung up; it swept aside the curtain of mist and exposed the white orb of the sun, low in the sky, for it was still very early. Yet it was daylight, and no daylight was wasted at flying schools during the Great War.

He reached the nearest hangar, and then stopped, eyes devouring an extraordinary structure of wood, wire, and canvas that stood in his path. A propeller, set behind two exposed seats, revolved slowly. Beside it stood a tall, thin man in flying-kit; his leather flying-coat, which was filthy beyond description with oil stains, flapped open, exposing an equally dirty tunic, on the breast of which a device in the form of a small pair of wings could just be seen. Under them was a tiny strip of the violet-and-white ribbon of the Military Cross.