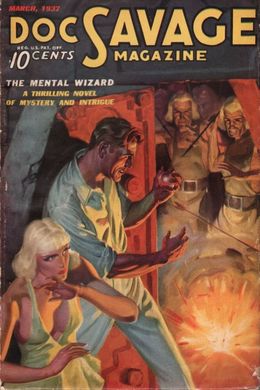 Devil on the Moon

A fiery red flash bursts through the silence of the night. A dying green man insists he’s been held captive on the Moon! A small blue capsule conceals an unearthly medallion. Doc and Patricia Savage set out to piece together this weird puzzle in time to save the world from the devilish merchants of international war.

A roaring sound was probably the first evidence of what was to come to be known as the mystery of the Devil on the Moon. A sick red light accompanied the roaring. It lighted up the surroundings, and struck the earth near the Spanish Plantation.

The Spanish Plantation was situated in Virginia, near Washington, and its old Colonial architecture was pleasantly distinguished. There was a colored orchestra and a sign which advertised chicken dinners. It was a nice place.

Lin Pretti was one among a number who heard the roar. She happened to be standing in a secluded spot on the Spanish Plantation lawn.

Lin Pretti had become something of a sensation around the Spanish Plantation. She was not an exquisitely beautiful girl, but her manners were perfect and her conversation excitingly clever. She grew on people, men especially. Lin Pretti was somewhat mysterious; no one really knew much about her.

The red, roaring thing came all the way down and dropped out of sight behind a nearby hill. There was a distinct report and an earth jar. Then came silence and darkness.

The falling object that came arching down out of the heavens might have been a meteor, except that meteors or shooting stars usually fade out after a shower of bright, dazzling sparks. They are burned away by friction with the earth’s atmosphere.

Lin Pretti reacted strangely. Her hands covered her eyes. A terrified sound escaped her. It was as though she knew the real nature of what had happened.

Bob Thomas found Lin Pretti with her hands over her eyes.

Bob Thomas, tall, blond, and rather good-looking, was a young Washington insurance salesman. He admitted being in love with Lin Pretti.

Lin Pretti suddenly jerked her hands from her face and seized Bob’s arm. Her fingers seemed to bite him. The girl swallowed twice before she managed to say, “Nothing.” She seemed frantic to get Bob Thomas talking about something besides the way she looked. “Bob,” she said quickly, “what—what did you learn of the man I asked you to look up information about?”

Bob Thomas was impatient. “This Doc Savage is a man who devotes his life to going about the world righting wrongs and punishing evildoers. It sounded kind of queer to me.” The young insurance man took both the girl’s hands in his. “Lin! What is wrong with you?”

“Bob,” she exclaimed wildly, “will you help me?”

“Get a flashlight, and be prepared for something so horrible and incredible that you’ll have trouble believing it.”

Brush grew on the hill behind the Spanish Plantation. Bob Thomas waved the beam of the flashlight he had taken out of his car, picking out the best route. When they topped the hill, Bob Thomas gave a surprised start.

A few hundred yards ahead was water. It was an arm of Chesapeake Bay. Thomas hadn’t known the bay was that close.

Bob Thomas followed her until they neared the lake. Then the girl stopped abruptly. She faced Bob Thomas.

“Will you promise me something?” she demanded.

Bob Thomas did not hesitate. “I promise!” he said.

“Don’t ever tell anyone what happens tonight!” the girl requested earnestly.

“I promise,” Bob Thomas said. He was astounded.

Lin Pretti stared about in the darkness. “It must have struck around here!” she said tensely.

This puzzled Bob Thomas; he’d been inside the Spanish Plantation, had not seen the strange, roaring red thing come out of the night sky. The girl reached for the flashlight. He let her have it. She ran forward, searching.

“Look here!” Bob said. “If there is anything dangerous around, it’s no place for a girl. Maybe I’d better take you back!”

Bob Thomas obeyed a natural masculine impulse and put his arm around the young woman.

Lin Pretti looked up at him. “Bob—you love me, don’t you?” she said.

“By George, if I don’t, I’ll do until the next guy comes along!” he said heartily.

“Don’t, please,” the girl said strangely, “because you’re too nice a young man to die.”

They found the green man lying behind a bush.

He was alive. He had a lot of bony framework; once he must have been a giant. But now there was only hide and gristle on his bones.

The man was not really green. His garment was a cloth like silk, a green hue a little darker than grass. It resembled a suit of tights.

Circling the green man’s midriff was a shiny metal belt. Around his neck was a bright metal collar equipped with wing nuts, as if a helmet fitted there.