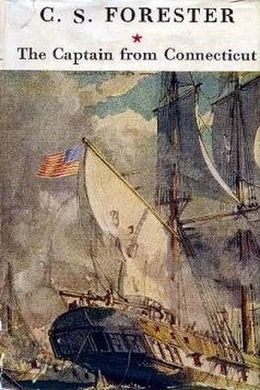 The Captain from Connecticut

No one but a madman would put to sea in such conditions. A blizzard cut visibility to yards. Long Island Sound was galloping whitecaps. But in this second year of the war of 1812, conditions like these spelled opportunity to Captain Josiah Peabody. His mission: break the British Blockade. The only thing in his favor was surprise. Who would expect a Yankee frigate in Long Island Sound at night?

Although it was mid–afternoon it was nearly as dark as a summer night. The ship swayed uneasily at her anchor as the wind howled round her, the rigging giving out musical tones, from the deep bass of the shrouds to the high treble of the running rigging. Already the snow was thick enough on her to blur the outlines of the objects on the deck. On its forward side the square base of the binnacle was now a rounded mound; the flemished coils of the falls were now merely white cylinders. The officer of the watch stood shivering in the little shelter offered by the mizzen mast bitts, and forward across the snow–covered deck a few unhappy hands crouched vainly seeking shelter under the high bulwarks.

The two officers who emerged upon the quarterdeck held their hats on to their heads against the shrieking wind. The shorter, slighter one turned up the collar of his heavy coat, and attempted instinctively to pull the front of it tighter across his chest to keep out the penetrating air. As he spoke in the grey darkness he had to raise his voice to make himself heard, despite the confidential nature of what he was saying.

The other turned about, and stood to windward with the snow driving into his face before he answered with a single word.

“The glass is still dropping. But it can’t go much lower,” went on the other. It seemed as if he were talking for the purpose of encouraging himself, not the man he was speaking to. “The west wind’ll veer nor’–easterly to–morrow, but by that time you’ll have weathered Montauk, please God.”

“Please God,” echoed Peabody—but it was more like a prayer, in the tone he employed, than the other man’s speech.

“Well, good–bye, then. The best of good fortune, Captain Peabody.”

The two men shook hands in their heavy furred gloves. Peabody raised his voice against the storm—it was a penetrating voice, nasal yet with a tenor musical tone which somehow made it more readily audible against the wind.

“Compliments in this weather?” asked the Commodore, a little surprised, but Peabody gave him no explanation. He was not going to allow a blizzard to interfere with the decent and proper routine of his ship.

The figures huddling for shelter under the bulwark came to life and scuttled across the deck and down into the gig. Other figures, black against the snowy deck, came swarming up from below. It was strange and unnatural that their feet made no sound on the deck. They were like ghosts in their noiselessness, treading the thick carpet of snow. Not even the marines, in their heavy shoes, made any sound. Feebly the pipes of the boatswain’s mates twittered in the shrieking wind as the Commodore went over the side down into his waiting gig. Peabody watched him down to the boat, saw the bowman cast off the painter, and then turned back to face the wind again.

“Man the capstan, there!” he shouted. “Mr. Hubbard, fore and main topmast staysails. Three reefs in the tops’ls, ready to sheet home.”

He stood with his hands behind him, facing into the bitter wind, and making no attempt whatever to shelter from it. Forward he could just hear the voice of the boatswain as he gave the word to the men at the capstan bars. Then he heard the clank–clank of the capstan; it was turning slowly—very slowly. It was hard work to drag the big frigate up to the anchor against the wind. There were men aloft, too; their movements disturbed the snow banked against the rigging, and it was drifting astern in big puffs visible through the snow. Another unexpected noise puzzled Peabody for a moment—it was the crackling of the frozen canvas as it was unrolled. And the frozen ropes crackled, too, like a whole succession of pistol shots, as they ran through the sheaves. Little lumps of ice stripped from them came raining down about him, whirled aft by the wind.

Peabody looked over the starboard quarter. Somewhere in that murk and darkness was the Long Island shore, and Willet’s Point, too near to be pleasant, he knew, although invisible. On the larboard bow, equally invisible, lay Throg’s Neck. It was only the protection of the guns of Fort Totten and Fort Schuyler on these two points which had enabled him to bring his ship thus far in peace. Beyond them the British Navy cruised unchallenged over the length and breadth of Long Island Sound, yet the watch over the Narrows was stricter still, so strict that in his considered judgment it had been better to make the attempt to reach the open sea by this back door to New York.