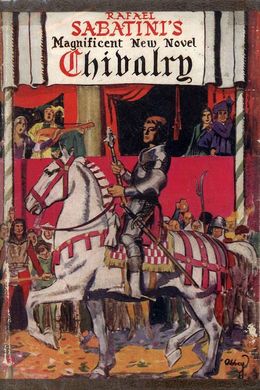 A novel filled with living characters and the clash of swords and laid in the picturesque fifteenth century. At the age of twenty-eight, Colombino had become one of the great mercenary captains of the day, his fame spreading across the length and breadth of Italy. But, soldier of fortune though he was, living on the bloody threshold of the Renaissance, Colombino patterned his life on the Age of Chivalry. It was for this reason perhaps that he led his Company of the Dove against Verona in the service of that beautiful and dangerous woman, the Countess Eufemia of Rovieto. Taking up arms for Lord Onorato and his daughter, the fair Samaritana, Colombino smashed the armies of Venice and fell in love with Samaritana, who was already secretly betrothed.

When his father was hanged, his mother died of a broken heart.

For the same reason he is known to history merely as Colombo da Siena. His arms—azure, a dove statant argent—are of his own adoption and, in rebus, merely expressive of his patronymic, for all that he came of an armigerous family and possessed the right to a patrician name and to some famous quarterings. Behind his disdain of one and the other lies the tragedy that was not without influence on his life. He was, in fact, the only son of that Lord of Terrarossa, Sigismondo Barberi, whom the Florentines dispossessed and deservedly put to death for treachery. He was ten or eleven years of age when he was left orphaned and destitute to face the world; and that he did not perish is due to a saintly brother of his mother’s, a Franciscan of the Large Observance, who sheltered him in his tender years from evil.

Later, as the lad grew, deepening in resemblance to his mother and displaying other qualities which endeared him to Fra Franco, his uncle, the question arose of finding a place for him in life. The friar would have made a determined attempt to obtain his reinstatement in the lordship which his father’s villainy had forfeited; and that humble little brother of Saint Francis was not without influence. But in this he met the sternest opposition from Colombo.

“Since the forfeiture was deserved and just, it stands as an expiation. In some sort it serves to cancel the offence. If we retract a payment we revive a debt. So, let it be.”

After vain arguments, the friar yielded to the clarity and honesty of the boy’s logic, abandoned the attempts he was setting on foot, and addressed himself to other prospects for his nephew.

In later years Colombo would frequently insist that his natural inclinations were entirely pacific. He loved nature and would have found his proper vocation in her service and in agrarian pursuits. But it also happened that he was equipped with rather more than the perception which, as his namesake the Genoese navigator was to demonstrate, is necessary so as to apprehend the obvious. It is, I fancy, the whole secret of his success in life, as it is of many another’s. It showed him in his nonage that a man born into the turbulence that constantly distracted the Italian Peninsula in the second half of the Quattrocento, should make haste to determine whether he would range himself with the sheep or with the wolves, since mankind in that time, and particularly in that land of unrest, offered no further choice.

The sheep were the toilers: the merchants, the peasants, the craftsmen, the artificers, even the clergy. The wolves were the princes and those who served them in their quarrels over the soil upon which those toilers had their being. To be industrious, productive, law-abiding, was to be in danger of unending harassment, to be constantly in peril of being plundered, fined, ruined or even slaughtered.

Considering all this Colombo reached the conclusion that if his natural inclinations did not urge him to become a wolf, even less did they urge him to remain a sheep.

Thus he states his case. But whilst scarcely conscious of it himself, his history states it otherwise. Accounting extinguished the house from which he sprang, there were in him from an early age the vague stirrings of an ambition to found another, infinitely more splendid, that should be entirely the work of his own hands and brain. Since he could not be a descendant without shame, he would become an ancestor of whom his posterity should be proud.

It is not to be asserted that he had deliberately set out with this intention when at the age of sixteen we find him trailing a pike in the service of his native Siena. Rather did the notion grow in him with his own vigorous and rapid growth until it took definite shape during that Sicilian campaign when first his name was blared from Fame’s trumpet across the length and breadth of Italy. He was in his twenty-eighth year by then and he had learnt the trade of arms under that great soldier Bartolomeo Colleoni. From modest beginnings in Colleoni’s company, with the command of ten helmets, he had risen rapidly to the position of one of that famous captain’s most trusted lieutenants.

Then, soon after Colleoni entered Venetian service Colombino—by which affectionate diminutive he had come to be known in the company—had separated from him, and forming a small condotta of his own, of a hundred lances, he had taken his sword, as it were, to Bellona’s market-place.

In the Sicilian campaign of which before all was over he was constrained by the favour of fortune to take complete command on behalf of Aragon, he won not only fame, but enough wealth to acquire the homestead and vineyard on Montasco, in Sienese territory, which he was gradually and nobly to extend.