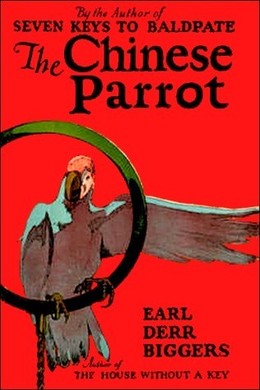 A mysterious millionaire with a penchant for strange pets takes a flyer on a string of pearls and finds that death is the broker. Charlie Chan embarks on an incognito journey across the desert to find the answer to a question – a question posed by a dead parrot who spoke in Chinese . . .Chan dons a disguise and goes undercover to solve a complex triple intrigue of fake identity, kidnapping and murder.

Alexander Eden stepped from the misty street into the great marble-pillared room where the firm of Meek and Eden offered its wares. Immediately, behind showcases gorgeous with precious stones or bright with silver, platinum, and gold, forty resplendent clerks stood at attention. Their morning coats were impeccable, lacking the slightest suspicion of a wrinkle, and in the left lapel of each was a pink carnation, as fresh and perfect as though it had grown there.

Eden nodded affably to right and left and went on his way, his heels clicking cheerily on the spotless tile floor. He was a small man, grey-haired and immaculate, with a quick, keen eye and the imperious manner that so well became his position. For the clan of Meek, having duly inherited the earth, had relinquished that inheritance and passed to the great beyond, leaving Alexander Eden the sole owner of the best-known jewellery store west of the Rockies.

Arriving at the rear of the shop, he ascended a brief stairway to the luxurious suite of offices on the mezzanine floor where he spent his days. In the anteroom of the suite he encountered his secretary.

The girl answered with a smile. Eden’s eye for beauty, developed by long experience in the jewel trade, had not failed him when he picked Miss Chase. She was an ash blonde with violet eyes; her manners were exquisite; so was her gown. Bob Eden, reluctant heir to the business, had been heard to remark that entering his father’s office was like arriving for tea in a very exclusive drawing-room.

Alexander Eden glanced at his watch. “In about ten minutes,” he announced, “I expect a caller–an old friend of mine–Madame Jordan, of Honolulu. When she arrives show her in at once.”

He passed on into his own room, where he hung up his hat, coat, and stick. On his broad, gleaming desk lay the morning mail; he glanced at it idly, but his mind was elsewhere. In a moment he strolled to one of the windows and stood there gazing at the façade of the building across the way.

The day was not far advanced, and the fog that had blanketed San Francisco the night before still lingered in the streets. Staring into that dull grey mist, Eden saw a picture, a picture that was incongruously all colour and light and life. His thoughts had travelled back down the long corridor of the years, and in that imagined scene outside the window he himself moved, a slim, dark boy of seventeen.

Forty years ago–a night in Honolulu, the gay, happy Honolulu of the monarchy. Behind a bank of ferns in one corner of the great Phillimore living-room Berger’s band was playing, and over the polished floor young Alec Eden and Sally Phillimore danced together. The boy stumbled now and then, for the dance was a newfangled one called the two-step, lately introduced into Hawaii by a young ensign from the Nipsic. But perhaps it was not entirely his unfamiliarity with the two-step that muddled him, for he knew that in his arms he held the darling of the islands.

Some few are favoured by fortune out of all reason, and Sally Phillimore was one of these. Above and beyond her beauty, which would have been sufficient in itself, she seemed, in that simple Honolulu society, the heiress of all the ages. The Phillimore fortunes were at their peak, Phillimore ships sailed the seven seas, on thousands of Phillimore acres the sugar-cane ripened toward a sweet, golden harvest. Looking down, Alec Eden saw hanging about the girl’s white throat, a symbol of her place and wealth, the famous pearl necklace Marc Phillimore had brought home from London, and for which he had paid a price that made all Honolulu gasp.

Eden, of Meek and Eden, continued to stare into the fog. It was pleasant to relive that night in Hawaii, a night filled with magic and the scent of exotic blossoms, to hear again the giddy laughter, the distant murmur of the surf, the soft croon of island music. Dimly he recalled Sally’s blue eyes shining up at him. More vividly–for he was nearly sixty now, and a business man–he saw again the big lustrous pearls that lay on her breast, reflecting the light with a warm glow….

Oh, well–he shrugged his shoulders. All that was forty years ago, and much had happened since. Sally’s marriage to Fred Jordan, for example, and then, a few years later, the birth of her only child, Victor. Eden smiled grimly. How ill-advised she had been when she named that foolish, wayward boy!

He went over to his desk and sat down. No doubt it was some escapade of Victor, he reflected, that was responsible for the scene shortly to be enacted here in this office in Post Street. Yes, of course, that was it. Victor, lurking in the wings, was about to ring down the final curtain on the drama of the Phillimore pearls.