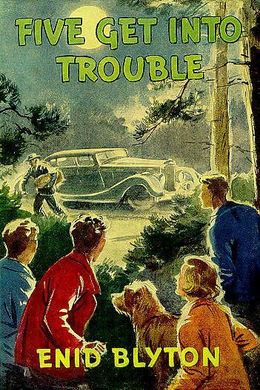 Five Get Into Trouble

Dick’s been kidnapped, mistaken for someone else, and the Famous Five are frantic! Desperately, they track him down to a sinister old house in the middle of nowhere - and he’s safe and well!But just when they thought their troubles were over, the gang find themselves held captive and in terrible danger! Who will come for them now…?

‘Really, Quentin, you are most difficult to cope with!’ said Aunt Fanny to her husband.

The four children sat at the table, eating breakfast, and looking very interested. What had Uncle Quentin done now? Julian winked at Dick, and Anne kicked George under the table. Would Uncle Quentin explode into a temper, as he sometimes did?

Uncle Quentin held a letter in his hand, which his wife had just given back to him after she had read it. It was the letter that was causing all the trouble. Uncle Quentin frowned—and then decided not to explode. Instead he spoke quite mildly.

‘Well, Fanny dear—how can I possibly be expected to remember exactly when the children’s holidays come, and if they are going to be here with us or with your sister? You know I have my scientific work to do—and very important it is too, at the moment. I can’t remember when the children’s schools break up or go back!’

‘You could always ask me,’ said Aunt Fanny, exasperated. ‘Really, Quentin—have you forgotten how we discussed having Julian, Dick and Anne here these Easter holidays because they all enjoy Kirrin and the sea so much at this time of the year? You said you would arrange to go off to your conferences after they had had their holidays—not in the very middle of them!’

‘But they’ve broken up so late!’ said Uncle Quentin. ‘I didn’t know they were going to do that.’

‘Well, but you know Easter came late this year, so they broke up late,’ said Aunt Fanny, with a sigh.

‘Father wouldn’t think of that,’ said George. ‘What’s the matter, Mother? Does Father want to go away in the middle of our holidays, or what?’

‘Yes,’ said Aunt Fanny, and she stretched out her hand for the letter again. ‘Let me see—he would have to go off in two days’ time—and I must certainly go with him. I can’t possibly leave you children alone here, with nobody in the house. If Joanna were not ill it would be all right—but she won’t be back for a week or two.’

Joanna was the cook. The children were all very fond of her, and had been sorry to find her missing when they had arrived for the holidays.

‘We can look after ourselves,’ said Dick. ‘Anne is quite a good little cook.’

‘I can help too,’ said George. Her real name was Georgina, but everyone called her George. Her mother smiled.

‘Oh George—last time you boiled an egg you left it in the saucepan till it boiled dry! I don’t think the others would like your cooking very much.’

‘It was just that I forgot the egg was there,’ said George. ‘I went to fetch the clock to time it, and on the way I remembered Timmy hadn’t had his dinner, and . . .’

‘Yes, we know all about that,’ said her mother with a laugh. ‘Timmy had his dinner, but your father had to go without his tea!’

‘Woof,’ said Timmy from under the table, hearing his name mentioned. He licked George’s foot just to remind her he was there.

‘Well, let’s get back to the subject,’ said Uncle Quentin, impatiently. ‘I’ve got to go to these conferences, that’s certain. I’ve to read some important papers there. You needn’t come with me, Fanny—you can stay and look after the children.’

‘Mother doesn’t need to,’ said George. ‘We can do something we badly wanted to do, but thought we’d have to put off till the summer hols.’

‘Well—what is it?’ asked Aunt Fanny. ‘I’m quite in the dark. If it’s anything dangerous, I shall say no. So make up your minds about that!’

‘When do we ever do anything dangerous?’ cried George.

‘Plenty of times,’ said her mother. ‘Now, what’s this plan of yours?’

‘It’s nothing much,’ said Julian. ‘It’s only that all our bikes happen to be in first-class order, Aunt Fanny, and you know you gave us two small tents for Christmas—so we just thought it would be great fun sometime to go off on our bikes, taking our tents with us—and do a little exploring round the countryside.’

‘It’s grand weather now—we could have fine fun,’ said Dick. ‘After all, you must have meant us to use the tents, Aunt Fanny! Here’s our chance!’

‘I meant you to use them in the garden, or on the beach,’ said Aunt Fanny. ‘Last time you went camping you had Mr. Luffy with you to look after you. I don’t think I like the idea of you going off by yourselves with tents.’

‘Oh, Fanny, if Julian can’t look after the others he must be a pretty feeble specimen,’ said her husband, sounding impatient. ‘Let them go! I’d bank on Julian any time to keep the others in order and see they were all safe and sound.’

‘Thanks, Uncle,’ said Julian, who was not used to compliments from his Uncle Quentin! He glanced round at the other children and grinned.