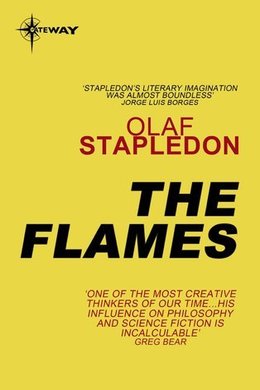 The Flames was Stapledon’s last major work of fiction before he died. After having narrowed his scope from the huge cosmic histories of Last and First Men (history of humanity) and Star Maker (history of the universe, Dante-esque cameo by God at the end) to the earthbound Odd John (super-man) and Sirius (super-dog), The Flames reads like an attempt to stuff them all into a 50-page novella. The story consists of three segments, each of which undercuts the last. In the first, the sensitive narrator talks to a “flame” in a burning stone who tells of life on the sun and subsequent exile when the planets were formed, with a polite dispassion not so far from that of Hal Clement. Despite some ill-fitting foreshadowing, the revelations in the second part that the flames are hellbent on manipulating humanity to help them thrive and pursue their spiritual aims, through mind control if necessary. To this end the flame reveals that he and his comrades caused the narrator’s wife to commit suicide, so the narrator could devote himself fully to his studies and establish contact with the flames…

My present address is bound to prejudice you against me, but do please reserve judgment until you have read this letter. No doubt most of us in this comfortable prison think we ought to be at large, and most are mistaken. But not all, so for God’s sake keep an open mind. I am not concerned for myself. They treat me well here, and I can carry on my research in para-norrnal and super-normal psychology as well here as anywhere, since I am used to being my own guinea-pig. But by accident (yet it was really no accident at all, as you will learn) I have come into momentous knowledge; and if mankind is to be saved from a prodigious and hitherto entirely unforeseen disaster, the facts must somehow be made known.

So I urge you to publish this letter as soon as possible. Of course I realize that its only chance is to be accepted by some publisher as fiction; but I have a hope that, even as fiction, it will take effect. It will be enough if I can rouse those who have sufficient imaginative insight to distinguish between mere fiction and stark truth paraded as fiction. My only doubt is as to whether any publisher will accept my story even as fiction. I am no writer; and people are more interested in clever yarns of love or crime than in matters that lie beyond the familiar horizon. As for the literary critics, with a few brilliant exceptions, they seem to be far more concerned to maintain their own reputations as connoscenti than to call attention to new ideas.

Well, here goes, anyhow! You remember how in the old days, I suspected that I had certain unusual powers, and you all laughed at me; specially you, Thos, with your passion for intellectual honesty. But though you were always the most sceptical, you were also in a way the most understanding, and sympathetic. Your laughter, somehow, didn’t ostracize me. Theirs did. Besides, even when you were in your most perverse and blind mood, you somehow “smelt” right, in spite of your scepticism. You were indeed sceptical, but emotionally you were open- minded and interested.

Recently I have developed those unusual powers quite a lot, and I am studying them scientifically: inspired by you. I should love to tell you all about it, and have your criticism, some day. But at present I am concerned with something far more important; infinitely important, from the human point of view, anyhow.

A couple of months before I was put in this place, I went to the Lakes for a holiday. I had recently done a job in Germany, writing up conditions, and things had got on my nerves; both the physical misery and also certain terrifying psychical reverberations which will sooner or later react on us all. When I returned to England, I was near a breakdown, and I needed that holiday desperately. So I found a farm where I could be comfortable and alone. I intended to do a lot of walking, and in the dark evenings I would read through a bundle of books on the para-normal stuff.

When I arrived, the whole countryside was under snow. Next morning I scrambled up the gill at the head of the valley and set my course for the most interesting of the local mountains. (I won’t trouble you with names, you miserable clod-hopper of the valleys!) All went well until the late afternoon, when, as I was coming down from the peak, a blizzard caught me. The wind went through my trousers like water through a sieve, and my legs stiffened with the cold, the hellish cold. I felt the beginnings of cramp. The driving snow shut out everything. The whole world was white, and yet at the same time black, so dark was it. (Why am I telling you all this? Frankly, I don’t see how it is relevant to my story, and yet I feel strongly that it is relevant: and must be reported, if you are to get things in the right proportion.) You remember how painfully sensitive I always was to the temper of a situation, a scene or a crowd of people. Well, this situation upset me horribly. I had to keep telling myself that, after all, I was not the last man on earth about to succumb to the ultimate frost. A queer terror seized me, not simply for myself, though I was very doubtful about finding my way down before nightfall, but for the whole human race. Something like this, I told myself, will really happen on the last man’s last day, when the sun is dying, and the whole planet is arctic. And it seemed to me that an icy and malignant presence, that had been waiting in the outer darkness ever since the universe blazed into being, was now closing in on all the frail offspring of that initial divine act of creation. I had felt the same terrifying presence in Germany too, but in a different mood.