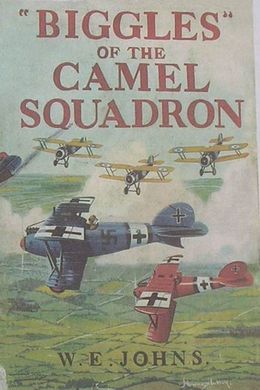 Biggles of the Camel Squadron

A new squadron member joins Biggles’ Squadron. He is Henry Watkins and he believes that the laws of mathematics have a solution for most aerial problems. He first discusses ‘deflection’ shooting, that is, shooting in front of a moving object at the place where the missile and object should collide. Henry goes with Biggles and Algy on a raid on Aerodrome 32 and soon gets completely lost in the comprehensive low cloud cover. Biggles and Algy carry out the raid alone and cause two Albatrosses to collide whilst trying to take off. Algy finished off another Albatross that managed to take off. Henry, meanwhile, has a confrontation with a German Hannoverana plane and manages to shoot it down, more by luck than judgement. Coming down through the cloud and finding himself over an aerodrome, Henry bombs it and then managed to get back to his own airfield. The later arrival of Major Sharp from 287 Squadron, wanting to know which fool has bombed his aerodrome has embarrassing consequences for Henry.

A slight fall of snow during the night had covered the aerodrome of Squadron No. 266, R.F.C., with a thin white mantle, and a low–hanging canopy of indigo–tinted cloud, stretching from horizon to horizon, held a promise of more to come.

Captain Bigglesworth, from the window of the Officers’ Mess, contemplated the wintry scene for the tenth time with bored impatience, then turned to the group of officers who were gathered around the mess fire discussing such matters of professional interest as machine–guns, bullets, and shooting generally.

“You say what you like, Mac,” Biggles interrupted MacLaren, the popular flight–commander of “B” Flight, “but I am absolutely certain that not one pilot in a thousand allows enough deflection when he is shooting. Look at any machine you like after a ‘dog–fight’, and you will find nearly all the bullet–holes are behind the ring markings. The same thing happens if you’ve been trench strafing. If you look over the side, you can see a hundred Germans shooting at you with any old weapon they’ve been able to grab—machine–guns, rifles, revolvers, and all the rest of it. But where do the bullets go? I don’t know. But I’ll bet you anything you like they’re miles behind. Not one in a thousand touches the machine, anyway. And why? Because it takes a lot of imagination to shoot five hundred feet in front of your target and expect to hit it. You don’t expect the infantry to sit down and work out by mathematics the fact that you are travelling about two hundred feet a second, and that by the time his bullet reaches the place where the machine was when he pulled the trigger the machine is no longer there. And it’s the same with archie. Watch a machine in the sky being shelled. Where is all the smoke? In nine cases out of ten it’s about half a mile behind. Every now and then you get a gunner who knows his stuff; but a lot of them don’t. Look at it this way. Suppose you are diving at a hundred and fifty miles an hour at twenty thousand feet up. A hundred and fifty miles an hour is over two hundred feet a second. It takes about twenty seconds for a shell to reach twenty thousand feet, so if the gunner aims at the machine without allowing for deflection the machine is about a mile away when the shell bursts!” Biggles concluded emphatically.

“It’s purely a matter of mathematics,” said a quiet voice near at hand.

Biggles started, and all eyes turned towards the speaker, a small, round–faced youth who was reclining in a cane chair. He nodded solemnly as he realised that everyone was looking at him.

“Did you say something?” said Biggles, with a questioning stare.

“I said that deflection shooting was, in my opinion, purely a matter of mathematics,” replied the youth, blinking owlishly.

A bellow of laughter split the air, for Henry Watkins, the speaker, had joined the squadron in France direct from a flying training school about one hour earlier, and these were the first words he had been heard to utter.

“What makes you think so, laddie?” asked Biggles, with a wink at MacLaren, when the mirth had subsided.

“Well, I have analysed this very desideratum—theoretically, of course,” confessed Henry, “and I long ago reached the conclusion that Euclidian precision with a machine–gun can be determined by a simple mathematical, or I should say algebraical, formula.”

“Is that so? And you are going to do sums in the air before you start shooting, eh?” grinned Biggles.

“Why not?” returned Henry quickly. “Mental arithmetic is always fascinating, and logarithms will lick luck every time. I have evolved a pet theory of my own which will probably revolutionise the whole art of aerial combat, and I am anxious to test it in practice at the first available opportunity.”

“That’s fine. Well, you won’t have long to wait!” interposed Biggles grimly. “You’ll get your chance just as soon as this muck lifts!” He indicated the clouds with an upward sweep of his thumb.

“Good!” replied Henry calmly. “Perhaps you would like me to show you my idea. Now, for the sake of example, let us assume that a hostile aircraft, or Hun, if you prefer the common colloquialism, is proceeding along a path of flight which we will call A–B, banking at an angle of, shall we say, thirty degrees—so. These two coffee–cups will indicate the imaginary line,” he went on, arranging the two cups on a card–table in front of the fire. “Now, I am approaching in my Camel on a course which we will call C–D—two more cups, thanks!—at an angle of bank of sixty degrees. Now, by a combination of factors which I will presently explain I will demonstrate to you that a prolongation of the muzzles of my Vickers guns will intercept the geometrical arc A–C in X seconds plus the cube root of the square of the chord B–C—a very simple equation. Now, if I equal Y——”