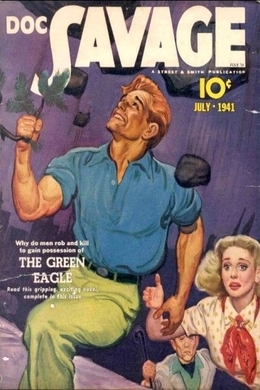 The Man of Bronze rides the mystery trail in a totally new kind of adventure. What is the strange fainting sickness? Who is the shadowy, white-haired McCain? Why would a starving man rather die than eat? And how many men must be brutally destroyed before Doc Savage can solve the riddle of The Green Eagle?

It was not a suspicion of anything definite around the Broken Circle Dude Ranch that led Ben Duck to go riding in the early night. Ben had no definite suspicions at the beginning of the evening jog, although before the ride ended, it was a different story.

One of the dude guests had said, “Donald Duck can guide us up to the Forks tomorrow.”

Ben Duck overheard this. He got mad and went riding to cool off, and to take stock of himself.

Because Ben Duck was a genuine cowboy, it was hurting his dignity to work on a dude outfit. He particularly resented being called Donald Duck by guests who were almost strangers. Donald Duck! It gave him a slow burn.

He rode away alone. He rode the west trail, up through the jack pines that grew in thick green clusters on the mountainside. It was steep going. The iron shoes on his pinto pony struck sparks from the flinty rocks. “Easy does it, Patches,” he muttered sympathetically to the horse. Later he got off and walked, digging in with the high heels of his boots, spurs jingling.

He sat on a hilltop and frowned at Wyoming in the night. In the west, the Teton Mountains were snow-covered and jaggedly majestic and white in the moonlight.

“I’m gonna tear into the next dude,” Ben said, “that calls me Donald Duck.”

And get fired. And be without a job. And jobs were scarce, even for a top hand. That wasn’t the remedy. Ben shook his head slowly.

If he even looked like the movie Donald Duck, or sounded like him, it would have been different. He might have excused the dudes. But, although he had no great admiration for the entertaining Donald, he had no desire to emulate him in action or appearance. Furthermore, he didn’t look in the least like the movie cartoon Donald Duck. Or did he?

If those dudes wanted to call him Donald Duck, he’d have to take it. The dudes paid eighteen dollars a day. For that money, they could call the hired help Donald Ducks if they wanted to.

Precious little of the eighteen dollars a day found its way into Ben’s pocket.

No salary would be worse, however.

The remedy would be simple. Own a little ranch of his own, a spread in some valley with a few dogies. A valley that was not so high up in the mountains that there was killing cold in winter, but high enough that summer range could be had up around the timber line. There was just one difficulty. It took money to buy a spread. And money was one thing Ben did not have.

“A danged dude wrangler,” he described himself disgustedly.

He thought of what his dad’s opinion would have been of his present status in the world, and shuddered. Old Man Duck had chased the Indians out of western Montana to make room for a whopping big cow outfit, and he rode the crest until he picked a fight with a group of encroaching nesters, and didn’t draw quick enough. Between the time they laid Old Man Duck in his grave, and the time Ben was big enough to do anything about it, the nesters took over the country and homesteaded all the Duck range. A bank eventually got the ranch, and an uncle got young Ben. Uncle Spud. About all Uncle Spud had been able to teach young Ben was to ride, fight, and be honest. Uncle Spud had trapped beaver for a living. Three years ago he had frozen to death in a March blizzard. Young Ben had gone out into the world and discovered it was hard to make a living punching cows.

“Donald Duck,” Ben said. He said it through his teeth.

After an hour or so he was soothed by the vastness of Wyoming in the moonlight. He climbed on Patches and rode silently down the path. It was purely accident that he was so silent, but he managed to surprise a man on the path.

Ben pulled the horse to a stop and watched the man ahead. The man was turning around and around strangely—and strangely was a mild word for it—on the path. He was a long man dressed darkly, except for his chaps, which were made from the hide of a black-and-white pinto pony. Ben recognized the chaps. He had resented them, because the pony skin was the color of Patches’ hide. The man was Albert Panzer, one of the Broken Circle dudes.

Ben watched Albert Panzer stop turning around and around and drop face-down on the path. He made a move to ride forward, but did not. Another man came out of the greasewood bushes beside the trail and stooped over the one who had fallen.

Ben Duck was quite calm. He liked to know exactly what he was doing before he did a thing. So he did not ride forward. He sat there and watched. The moonlight was bright. Very bright.

The man who had come out of the bushes was searching Albert Panzer. Thoroughly, too. Feeling out garment seams, scratching buttons with the point of a knife, thrusting a pin into hat felt and belt leather.