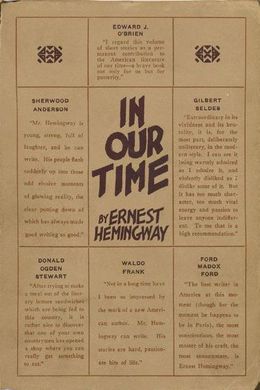 A strikingly original collection of short stories and accompanying vignettes that marked Ernest Hemingway’s American debut. When published, it was praised by Ford Madox Ford, John Dos Passos, and F. Scott Fitzgerald for its simple and precise use of language to convey a wide range of complex emotions, and it earned Hemingway a place beside Sherwood Anderson and Gertrude Stein among the most promising American writers of that period. In Our Time contains several early Hemingway classics, including the famous Nick Adams stories Indian Camp, The Doctor and the Doctor’s Wife, The Three Day Blow, and The Battler, and introduces readers to the hallmarks of the Hemingway style: a lean, tough prose – enlivened by an car for the colloquial and an eye for the realistic that suggests, through the simplest of statements, a sense of moral value and a clarity of heart. Now recognized as one of the most original short story collections in twentieth-century literature, In Our Time provides a key to Hemingway’s later works.

Everybody was drunk. The whole battery was drunk going along the road in the dark. We were going to the Champagne. The lieutenant kept riding his horse out into the fields and saying to him, “I’m drunk, I tell you, mon vieux. Oh, I am so soused.” We went along the road all night in the dark and the adjutant kept riding up alongside my kitchen and saying, “You must put it out. It is dangerous. It will be observed.” We were fifty kilometers from the front but the adjutant worried about the fire in my kitchen. It was funny going along that road. That was when I was a kitchen corporal.

The first matador got the horn through his sword hand and the crowd hooted him out. The second matador slipped and the bull caught him through the belly and he hung on to the horn with one hand and held the other tight against the place, and the bull rammed him wham against the wall and the horn came out, and he lay in the sand, and then got up like crazy drunk and tried to slug the men carrying him away and yelled for his sword but he fainted. The kid came out and had to kill five bulls because you can’t have more than three matadors, and the last bull he was so tired he couldn’t get the sword in. He couldn’t hardly lift his arm. He tried five times and the crowd was quiet because it was a good bull and it looked like him or the bull and then he finally made it. He sat down in the sand and puked and they held a cape over him while the crowd hollered and threw things down into the bull ring.

Minarets stuck up in the rain out of Adrianople across the mud flats. The carts were jammed for thirty miles along the Karagatch road. Water buffalo and cattle were hauling carts through the mud. No end and no beginning. Just carts loaded with everything they owned. The old men and women, soaked through, walked along keeping the cattle moving. The Maritza was running yellow almost up to the bridge. Carts were jammed solid on the bridge with camels bobbing along through them. Greek cavalry herded along the procession. Women and kids were in the carts crouched with mattresses, mirrors, sewing machines, bundles. There was a woman having a kid with a young girl holding a blanket over her and crying. Scared sick looking at it. It rained all through the evacuation.

We were in a garden at Mons. Young Buckley came in with his patrol from across the river. The first German I saw climbed up over the garden wall. We waited till he got one leg over and then potted him. He had so much equipment on and looked awfully surprised and fell down into the garden. Then three more came over further down the wall. We shot them. They all came just like that.

It was a frightfully hot day. We’d jammed an absolutely perfect barricade across the bridge. It was simply priceless. A big old wrought iron grating from the front of a house. Too heavy to lift and you could shoot through it and they would have to climb over it. It was absolutely topping. They tried to get over it, and we potted them from forty yards. They rushed it, and officers came out alone and worked on it. It was an absolutely perfect obstacle. Their officers were very fine. We were frightfully put out when we heard the flank had gone, and we had to fall back.

They shot the six cabinet ministers at half-past six in the morning against the wall of a hospital. There were pools of water in the courtyard. There were wet dead leaves on the paving of the courtyard. It rained hard. All the shutters of the hospital were nailed shut. One of the ministers was sick with typhoid. Two soldiers carried him downstairs and out into the rain. They tried to hold him up against the wall but he sat down in a puddle of water. The other five stood very quietly against the wall. Finally the officer told the soldiers it was no good trying to make him stand up. When they fired the first volley he was sitting down in the water with his head on his knees.

Nick sat against the wall of the church where they had dragged him to be clear of machine gun fire in the street. Both legs stuck out awkwardly. He had been hit in the spine. His face was sweaty and dirty. The sun shone on his face. The day was very hot. Rinaldi, big backed, his equipment sprawling, lay face downward against the wall. Nick looked straight ahead brilliantly. The pink wall of the house opposite had fallen out from the roof, and an iron bedstead hung twisted toward the street. Two Austrian dead lay in the rubble in the shade of the house. Up the street were other dead. Things were getting forward in the town. It was going well. Stretcher bearers would be along any time now. Nick turned his head carefully and looked down at Rinaldi. “Senta Rinaldi. Senta. You and me we’ve made a separate peace.”