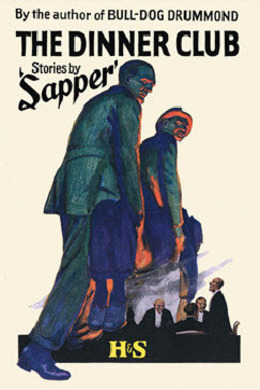 A fascinating collection of tales, including stories related by members of a select club consisting of an actor, a barrister, a doctor, a soldier, a writer and an ordinary man. Each member of this club is obliged to entertain his fellows to dinner from time to time, after which he relates a story connected with his profession or trade - the only penalty is a donation to a worthy charity should he fail to keep his audience awake. Readers of these excellent stories may rest assured that there is no such danger.

“The trouble in my game,” he began, “is that the greatest plays can never be staged. There would be no money in them. The public demand a plot—a climax: after that the puppets cease strutting, the curtain rings down. But in life—in real life—there’s no plot. It’s just a series of anti–climaxes strung together like a patchwork quilt, until there comes the greatest anti–climax of all and the quilt is finished.”

He passed his hand through his fast–greying hair, and stared for a moment or two at the fire. The Soldier was filling his pipe; the Writer, his legs stretched in front of him, had his hands thrust deep in his trouser pockets.

“You remember that play of mine—’John Pendlesham’s Wife’?” He turned to the Barrister, who nodded.

“Very well,” he answered. “Molly Travers was your leading lady.”

“I was out of England,” said the Soldier. “Never saw it.”

“It’s immaterial.” The Actor lit a cigarette. “The play itself has nothing to do with my story, except indirectly. But as you didn’t see it, I will just explain this much. I, of course, was John Pendlesham—Molly was my wife, and the third act constituted what, in my opinion, was the finest piece of emotional acting which that consummate actress has ever done in her career.”

The Writer nodded. “I agree. She was superb.”

“Night after night the fall of the curtain found her nearly fainting; night after night there was that breathless moment of utter silence followed by a perfect crash of applause. I am mentioning these old facts because her marvellous performance does concern my story directly—even though the play does not.

“We had been running about a month, I suppose, when my story begins. I had just come off after the third act, and was going to my dressing–room. For some reason, instead of going by the direct door which led into it from the stage, I went outside into the passage. There were some hands moving furniture or something….

“I think you’ve all of you been behind at my theatre. First you come to the swing doors out of the street, inside which the watch dog sits demanding callers’ business. Then there is another door, and beyond that there are three steps down to my room. And it was just as I was opening my door on that night that I happened to look round.

“We get all sorts and conditions of people behind, as you’d expect—stage–struck girls, actors out of a shop, autograph hunters, beggars. And the watch dog knew my invariable rule: only personal friends and people who had made an appointment by letter were allowed inside the second door. But a rule cannot legislate for every case.

“Gad! you fellows, it’s many years now since that night, but I can still feel, as clearly as if it were yesterday, the message in that girl’s eyes. There had been hope and fear and pitiful entreaty: the look of one who had staked everything on a last desperate throw: the look of a mother who is fighting for her child. It was amazing: I couldn’t understand it. As I stood just inside my door I couldn’t have told you whether she was old or young, plain or pretty. And yet in that one fleeting second this vivid, jumbled message had reached me.” The Actor pressed out his cigarette, and there was silence while he lit another one.

“For a moment I hesitated,” he continued after a while; “then I rang the bell for the watch dog.

“‘Who is that lady I saw outside there?’ I asked, as he came in.

“Once again I hesitated; probably I’d exaggerated—put a totally false construction on her expression, probably she was looking for a job like the rest of them. And then I knew that I’d got to see that woman, and that I should have no peace of mind until I’d heard what she had to say. The watch dog was regarding me curiously; plainly he could see no reason whatever for my hesitation. He was a matter–of–fact fellow, was the guardian of the door.

“‘Show her in, I’ll see her now.’ I had my back to him, but I could feel his virtuous indignation. After all, rules are rules.

“He went out, and I heard him go up the steps.

“And then the door opened again, and I turned to face the woman. She was young—quite young, dressed in a kind of cheap suburban frock. Her shoes had been good ones—once, now—well, however skilfully a patch is put on it is still a patch.