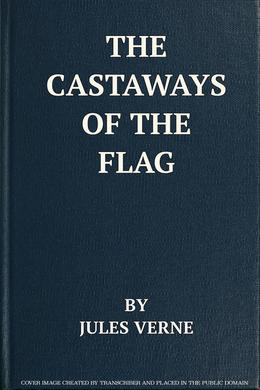 The Castaways of the Flag

The Final Adventures of the Swiss Family Robinson

With the restoration of Fritz Zermatt and his wife Jenny, his brother Frank and the other Castaways of the Flag to their anxious and sorely tried relatives in New Switzerland, the story of The Swiss Family Robinson is brought to its proper end. Thereafter, the interest of their domestic life is merged in that of the growth of a young colony. Romance is merged in history and the romancer’s work is finished. Jules Verne has here set the coping stone on the structure begun by Rudolph Wyss, and in The Swiss Family Robinson, Their Island Home and The Castaways of the Flag we have, not a story and two sequels, but a complete trilogy.

Night—a pitch-dark night! It was almost impossible to distinguish sky from sea. From the sky, laden with clouds low and heavy, deformed and tattered, lightning flashed every now and then, followed by muffled rolls of thunder. At these flashes the horizon lit up for a moment and showed deserted and melancholy.

No wave broke in foam upon the surface of the sea. There was nothing but the regular and monotonous rolling of the swell and the gleam of ripples under the lightning flashes. Not a breath moved across the vast plain of ocean, not even the hot breath of the storm. But electricity so charged the atmosphere that it escaped in phosphorescent light, and ran up and down the rigging of the boat in tongues of Saint Elmo’s fire. Although the sun had set four or five hours ago, the sweltering heat of the day had not passed.

Two men talked in low tones, in the stern of a big ship’s boat that was decked in to the foot of the mast. Her foresail and jib were flapping as the monotonous rolling shook her.

One of these men, holding the tiller tucked under his arm, tried to dodge the cruel swell that rolled the boat from side to side. He was a sailor, about forty years of age, thick-set and sturdy, with a frame of iron on which fatigue, privation, even despair, had never taken effect. An Englishman by nationality, this boatswain was named John Block.

The other man was barely eighteen, and did not seem to belong to the sea-faring class.

In the bottom of the boat, under the poop and seats, with no strength left to pull the oars, a number of human beings were lying, among them a child of five years old—a poor little creature whose whimpering was audible, whom its mother tried to hush with idle talk and kisses.

Before the mast, upon the poop, and near the jib stays, two people sat motionless and silent, hand in hand, lost in the most gloomy thoughts. So intense was the darkness that it was only by the lightning flashes that they could see each other.

From the bottom of the boat a head was lifted sometimes, only to droop again at once.

The boatswain spoke to the young man lying by his side.

“No, no. I watched the horizon until the sun went down. No land in sight—not a sail! But what I didn’t see this evening will perhaps be visible at dawn.”

“But, bo’sun,” his companion answered, “we must get to land somewhere in the next forty-eight hours, or we shall have succumbed.”

“That’s true,” John Block agreed. “Land must appear—simply must. Why, continents and islands were made on purpose to give shelter to brave men, and one always ends by getting to them!”

“That is the only reason wind was invented,” John Block replied. “To-day, as bad luck would have it, it was busy somewhere else, in the middle of the Atlantic or the Pacific perhaps, for it didn’t blow enough here to fill my cap. Yes, a jolly good gale would blow us merrily along.”

Then for some minutes the two men were silent. Nothing could be heard but the gentle rippling under the boat.

“How is the captain?” the young man went on.

“Captain Gould, good man, is in bad case,” John Block replied. “How those blackguards knocked him about! The wound in his head makes him cry out with pain. And it was an officer in whom he had every confidence who stirred those wretches up! No, no! One fine morning, or one fine afternoon, or perhaps one fine evening, that rascal of a Borupt shall make his last ugly face at the yardarm or——”

“The brute! The brute!” the young man exclaimed, clenching his fists in wrath. “But poor Harry Gould! You dressed his wounds this evening, Block——”

“Ay, ay; and when I put him back under the poop, after I had put compresses on his head, he was able to speak to me, though very feebly. ‘Thanks, Block, thanks,’ he said—as if I wanted thanks! ‘And land? What about land?’ he asked. ‘You may be quite sure, captain,’ I told him, ‘that there is land somewhere, and perhaps not very far off.’ He looked at me and closed his eyes.”

And the boatswain murmured in an aside: “Land? Land? Ah, Borupt and his accomplices knew very well what they were about! While we were shut up in the bottom of the hold, they altered the course; they went some hundreds of miles away before they cast us adrift in this boat—in seas where a ship is hardly ever seen, I guess.”

The young man had risen. He stooped, listening to port.

“Didn’t you hear anything, Block?” he asked.

“Nothing, nothing at all,” the boatswain answered; “this swell is as noiseless as if it were made of oil instead of water.”

The young man said no more, but sat down again with his arms folded across his breast.