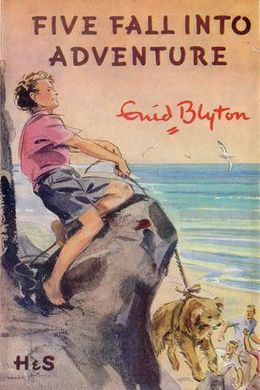 Just as the Five are relaxing into the holidays, a burglar breaks into their uncle’s study, searching for top-secret documents! And when George and Timmy mysteriously disappear, Julian, Dick, and Anne must track them down. Is the burglary linked to their disappearance - and what dangers must they overcome to find them?

Georgina was at the station to meet her three cousins. Timmy her dog was with her, his long tail wagging eagerly. He knew quite well they had come to meet Julian, Dick and Anne, and he was glad. It was much more fun when the Five were all together.

‘Here comes the train, Timmy!’ said George. Nobody called her Georgina, because she wouldn’t answer if they did. She looked like a boy with her short curly hair and her shorts and open-necked shirt. Her face was covered with freckles, and her legs and arms were as brown as a gipsy’s.

There was the far-off rumble of a train, and as it came nearer, a short warning hoot. Timmy whined and wagged his tail. He didn’t like trains, but he wanted this one to come.

Nearer and nearer it came, slowing down as it reached Kirrin station. Long before it came to the little platform three heads appeared out of one of the windows, and three hands waved wildly. George waved back, her face one big smile.

The door swung open almost before the train stopped. Out came a big boy, and helped down a small girl. Then came another boy, not quite so tall as the first one, with a bag in each hand. He dragged a third bag out, and then George and Timmy were on him.

‘Julian! Dick! Anne! Your train’s late; we thought you were never coming!’

‘Hallo, George! Oh, Timmy, you darling—you’re just as licky as ever!’

‘Woof,’ said Timmy joyfully, and bounded all round like a mad thing, getting into everybody’s way.

‘Any trunk or anything?’ asked George. ‘Only those three bags?’

‘Well, we haven’t come for long this time, worse luck,’ said Dick. ‘Only a fortnight! Still, it’s better than nothing.’

‘You shouldn’t have gone off to France all those six weeks,’ said George, half-jealously. ‘I suppose you’ve gone all French now.’

Dick laughed, waved his hands in the air and went off into a stream of quick French that sounded just like gibberish to George. French was not one of her strong subjects.

‘Shut up,’ she said, giving him a friendly shove. ‘You’re just the same old idiot. Oh, I’m so glad you’ve come. It’s been lonely and dull at Kirrin without you.’

A porter came up with a barrow. Dick turned to him waved his hands again, and addressed the astonished man in fluent French. But the porter knew Dick quite well.

‘Go on with you,’ he said. ‘Argy-bargying in double-Dutch like that. Do you want me to wheel these up to Kirrin Cottage for you?’

‘Oh, let him go on,’ said George, and she linked her arms in Anne’s and Dick’s. ‘It’s lovely to have you again. Mother’s looking forward to seeing you all.’

‘I bet Uncle Quentin isn’t,’ said Julian, as they went along the little platform, Timmy capering round them.

‘Father’s in quite a good temper,’ said George. ‘You know he’s been to America with Mother, lecturing and hearing other scientists lecturing too. Mother says everyone made a great fuss of him, and he liked it.’

George’s father was a brilliant scientist, well-known all over the world. But he was rather a difficult man at home, impatient, hot-tempered and forgetful. The children were fond of him, but held him in great respect. They all heaved a sigh of relief when he went away for a few days, for then they could make as much noise as they liked, tear up and down the stairs, play silly jokes and generally be as mad as they pleased.

‘Will Uncle Quentin be at home all the time we’re staying with you?’ asked Anne. She was really rather afraid of her hot-tempered uncle.

‘No,’ said George. ‘Mother and Father are going away for a tour in Spain—so we’ll be on our own.’

‘Wizard!’ said Dick. ‘We can wear our bathing costumes all day long then if we want to.’

‘And Timmy can come in at meal-times without being sent out whenever he moves,’ said George. ‘He’s been sent out every single meal-time this week, just because he snapped at the flies that came near him. Father goes absolutely mad if Timmy suddenly snaps at a fly.’

‘Shame!’ said Anne, and patted Timmy’s rough-haired back. ‘You can snap at every single fly you like, Timmy, when we’re on our own.’

‘There won’t be time for any adventure these hols,’ said Dick, regretfully, as they walked down the lane to Kirrin Cottage. Red poppies danced along the way, and in the distance the sea shone as blue as cornflowers. ‘Only two weeks—and back we go to school! Well, let’s hope the weather keeps fine. I want to bathe six times a day!’

Soon they were all sitting round the tea-table at Kirrin Cottage, and their Aunt Fanny was handing round plates of her nicest scones and tea-cake. She was very pleased to see her nephews and niece again.