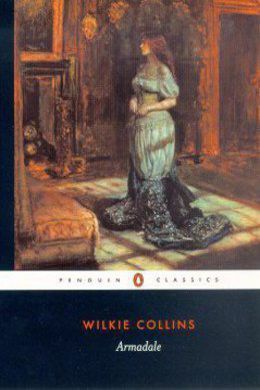 Can a dream foretell the future? That is one of the central questions of Armadale, one of Wilkie Collins’ lesser-known novels. But even though it is not as famous as The Woman in White or The Moonstone, it is still written with the psychological awareness and piercing character studies of the best of Collins’ work.

On a warm May night, in the year eighteen hundred and fifty–one, the Reverend Decimus Brock—at that time a visitor to the Isle of Man—retired to his bedroom at Castletown, with a serious personal responsibility in close pursuit of him, and with no distinct idea of the means by which he might relieve himself from the pressure of his present circumstances.

The clergyman had reached that mature period of human life at which a sensible man learns to decline (as often as his temper will let him) all useless conflict with the tyranny of his own troubles. Abandoning any further effort to reach a decision in the emergency that now beset him, Mr. Brock sat down placidly in his shirt sleeves on the side of his bed, and applied his mind to consider next whether the emergency itself was as serious as he had hitherto been inclined to think it. Following this new way out of his perplexities, Mr. Brock found himself unexpectedly traveling to the end in view by the least inspiriting of all human journeys—a journey through the past years of his own life.

One by one the events of those years—all connected with the same little group of characters, and all more or less answerable for the anxiety which was now intruding itself between the clergyman and his night’s rest—rose, in progressive series, on Mr. Brock’s memory. The first of the series took him back, through a period of fourteen years, to his own rectory on the Somersetshire shores of the Bristol Channel, and closeted him at a private interview with a lady who had paid him a visit in the character of a total stranger to the parson and the place.

The lady’s complexion was fair, the lady’s figure was well preserved; she was still a young woman, and she looked even younger than her age. There was a shade of melancholy in her expression, and an undertone of suffering in her voice—enough, in each case, to indicate that she had known trouble, but not enough to obtrude that trouble on the notice of others. She brought with her a fine, fair–haired boy of eight years old, whom she presented as her son, and who was sent out of the way, at the beginning of the interview, to amuse himself in the rectory garden. Her card had preceded her entrance into the study, and had announced her under the name of “Mrs. Armadale.” Mr. Brock began to feel interested in her before she had opened her lips; and when the son had been dismissed, he awaited with some anxiety to hear what the mother had to say to him.

Mrs. Armadale began by informing the rector that she was a widow. Her husband had perished by shipwreck a short time after their union, on the voyage from Madeira to Lisbon. She had been brought to England, after her affliction, under her father’s protection; and her child—a posthumous son—had been born on the family estate in Norfolk. Her father’s death, shortly afterward, had deprived her of her only surviving parent, and had exposed her to neglect and misconstruction on the part of her remaining relatives (two brothers), which had estranged her from them, she feared, for the rest of her days. For some time past she had lived in the neighboring county of Devonshire, devoting herself to the education of her boy, who had now reached an age at which he required other than his mother’s teaching. Leaving out of the question her own unwillingness to part with him, in her solitary position, she was especially anxious that he should not be thrown among strangers by being sent to school. Her darling project was to bring him up privately at home, and to keep him, as he advanced in years, from all contact with the temptations and the dangers of the world.

With these objects in view, her longer sojourn in her own locality (where the services of the resident clergyman, in the capacity of tutor, were not obtainable) must come to an end. She had made inquiries, had heard of a house that would suit her in Mr. Brock’s neighborhood, and had also been told that Mr. Brock himself had formerly been in the habit of taking pupils. Possessed of this information, she had ventured to present herself, with references that vouched for her respectability, but without a formal introduction; and she had now to ask whether (in the event of her residing in the neighborhood) any terms that could be offered would induce Mr. Brock to open his doors once more to a pupil, and to allow that pupil to be her son.

If Mrs. Armadale had been a woman of no personal attractions, or if Mr. Brock had been provided with an intrenchment to fight behind in the shape of a wife, it is probable that the widow’s journey might have been taken in vain. As things really were, the rector examined the references which were offered to him, and asked time for consideration. When the time had expired, he did what Mrs. Armadale wished him to do—he offered his back to the burden, and let the mother load him with the responsibility of the son.