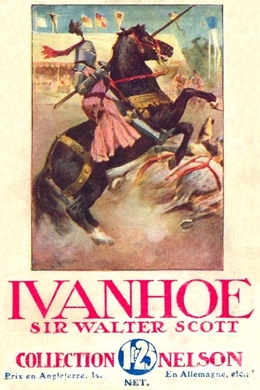 In Ivanhoe, Scott fashioned an imperial myth of national cultural identity that has shaped the popular imagination ever since its first appearance at the end of 1819. With the secret return of King Richard and the disinherited Saxon knight Ivanhoe, Scott confronts his splendid and tumultuous romance, featuring the tournament at Ashby-de- la-Zouche, the siege of Torquilstone, and the clash of wills between the wicked Templar Bois-Guilbert and the sublime Rebecca.

In that pleasant district of merry England which is watered by the river Don, there extended in ancient times a large forest, covering the greater part of the beautiful hills and valleys which lie between Sheffield and the pleasant town of Doncaster. The remains of this extensive wood are still to be seen at the noble seats of Wentworth, of Warncliffe Park, and around Rotherham. Here haunted of yore the fabulous Dragon of Wantley; here were fought many of the most desperate battles during the Civil Wars of the Roses; and here also flourished in ancient times those bands of gallant outlaws, whose deeds have been rendered so popular in English song.

Such being our chief scene, the date of our story refers to a period towards the end of the reign of Richard I., when his return from his long captivity had become an event rather wished than hoped for by his despairing subjects, who were in the meantime subjected to every species of subordinate oppression. The nobles, whose power had become exorbitant during the reign of Stephen, and whom the prudence of Henry the Second had scarce reduced to some degree of subjection to the crown, had now resumed their ancient license in its utmost extent; despising the feeble interference of the English Council of State, fortifying their castles, increasing the number of their dependants, reducing all around them to a state of vassalage, and striving by every means in their power, to place themselves each at the head of such forces as might enable him to make a figure in the national convulsions which appeared to be impending.

The situation of the inferior gentry, or Franklins, as they were called, who, by the law and spirit of the English constitution, were entitled to hold themselves independent of feudal tyranny, became now unusually precarious. If, as was most generally the case, they placed themselves under the protection of any of the petty kings in their vicinity, accepted of feudal offices in his household, or bound themselves by mutual treaties of alliance and protection, to support him in his enterprises, they might indeed purchase temporary repose; but it must be with the sacrifice of that independence which was so dear to every English bosom, and at the certain hazard of being involved as a party in whatever rash expedition the ambition of their protector might lead him to undertake. On the other hand, such and so multiplied were the means of vexation and oppression possessed by the great Barons, that they never wanted the pretext, and seldom the will, to harass and pursue, even to the very edge of destruction, any of their less powerful neighbours, who attempted to separate themselves from their authority, and to trust for their protection, during the dangers of the times, to their own inoffensive conduct, and to the laws of the land.

A circumstance which greatly tended to enhance the tyranny of the nobility, and the sufferings of the inferior classes, arose from the consequences of the Conquest by Duke William of Normandy. Four generations had not sufficed to blend the hostile blood of the Normans and Anglo-Saxons, or to unite, by common language and mutual interests, two hostile races, one of which still felt the elation of triumph, while the other groaned under all the consequences of defeat. The power had been completely placed in the hands of the Norman nobility, by the event of the battle of Hastings, and it had been used, as our histories assure us, with no moderate hand. The whole race of Saxon princes and nobles had been extirpated or disinherited, with few or no exceptions; nor were the numbers great who possessed land in the country of their fathers, even as proprietors of the second, or of yet inferior classes. The royal policy had long been to weaken, by every means, legal or illegal, the strength of a part of the population which was justly considered as nourishing the most inveterate antipathy to their victor. All the monarchs of the Norman race had shown the most marked predilection for their Norman subjects; the laws of the chase, and many others equally unknown to the milder and more free spirit of the Saxon constitution, had been fixed upon the necks of the subjugated inhabitants, to add weight, as it were, to the feudal chains with which they were loaded. At court, and in the castles of the great nobles, where the pomp and state of a court was emulated, Norman-French was the only language employed; in courts of law, the pleadings and judgments were delivered in the same tongue. In short, French was the language of honour, of chivalry, and even of justice, while the far more manly and expressive Anglo-Saxon was abandoned to the use of rustics and hinds, who knew no other.