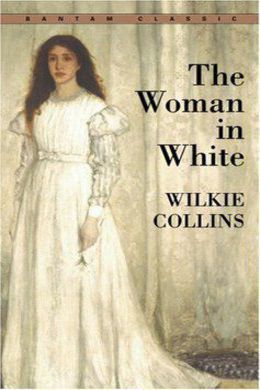 The Woman in White

The woman in white first appears at night on a lonely heath near London and is next seen at a grave-side in Cumberland. Who is she? Where has she come from, and what is her history? She seems alone and friendless, frightened and confused. And it seems she knows a secret - a secret that could bring ruin and shame to a man who will do anything to keep her silent. This famous mystery thriller has excitement, suspense, romance, and a plot that twists and turns on every page.

If the machinery of the Law could be depended on to fathom every case of suspicion, and to conduct every process of inquiry, with moderate assistance only from the lubricating influences of oil of gold, the events which fill these pages might have claimed their share of the public attention in a Court of Justice.

But the Law is still, in certain inevitable cases, the pre–engaged servant of the long purse; and the story is left to be told, for the first time, in this place. As the Judge might once have heard it, so the Reader shall hear it now. No circumstance of importance, from the beginning to the end of the disclosure, shall be related on hearsay evidence. When the writer of these introductory lines (Walter Hartright by name) happens to be more closely connected than others with the incidents to be recorded, he will describe them in his own person. When his experience fails, he will retire from the position of narrator; and his task will be continued, from the point at which he has left it off, by other persons who can speak to the circumstances under notice from their own knowledge, just as clearly and positively as he has spoken before them.

Thus, the story here presented will be told by more than one pen, as the story of an offence against the laws is told in Court by more than one witness—with the same object, in both cases, to present the truth always in its most direct and most intelligible aspect; and to trace the course of one complete series of events, by making the persons who have been most closely connected with them, at each successive stage, relate their own experience, word for word.

It was the last day of July. The long hot summer was drawing to a close; and we, the weary pilgrims of the London pavement, were beginning to think of the cloud–shadows on the corn–fields, and the autumn breezes on the sea–shore.

For my own poor part, the fading summer left me out of health, out of spirits, and, if the truth must be told, out of money as well. During the past year I had not managed my professional resources as carefully as usual; and my extravagance now limited me to the prospect of spending the autumn economically between my mother’s cottage at Hampstead and my own chambers in town.

The evening, I remember, was still and cloudy; the London air was at its heaviest; the distant hum of the street–traffic was at its faintest; the small pulse of the life within me, and the great heart of the city around me, seemed to be sinking in unison, languidly and more languidly, with the sinking sun. I roused myself from the book which I was dreaming over rather than reading, and left my chambers to meet the cool night air in the suburbs. It was one of the two evenings in every week which I was accustomed to spend with my mother and my sister. So I turned my steps northward in the direction of Hampstead.

Events which I have yet to relate make it necessary to mention in this place that my father had been dead some years at the period of which I am now writing; and that my sister Sarah and I were the sole survivors of a family of five children. My father was a drawing–master before me. His exertions had made him highly successful in his profession; and his affectionate anxiety to provide for the future of those who were dependent on his labours had impelled him, from the time of his marriage, to devote to the insuring of his life a much larger portion of his income than most men consider it necessary to set aside for that purpose. Thanks to his admirable prudence and self–denial my mother and sister were left, after his death, as independent of the world as they had been during his lifetime. I succeeded to his connection, and had every reason to feel grateful for the prospect that awaited me at my starting in life.

The quiet twilight was still trembling on the topmost ridges of the heath; and the view of London below me had sunk into a black gulf in the shadow of the cloudy night, when I stood before the gate of my mother’s cottage. I had hardly rung the bell before the house door was opened violently; my worthy Italian friend, Professor Pesca, appeared in the servant’s place; and darted out joyously to receive me, with a shrill foreign parody on an English cheer.