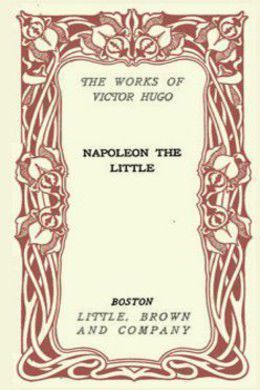 Napoleon the Little was an influential political pamphlet by Victor Hugo which condemned the reign of Napoleon III, Emperor of the French. Hugo lived in exile in Guernsey for most of Napoleon III’s reign, and his criticism of the monarch was significant as he was one of the most prominent Frenchmen of the time, and was revered by many. It includes the concept of two and two make five as a denial of truth by authority, a notion later used by George Orwell in Nineteen Eighty-Four

On Thursday, December 20, 1848, the Constituent Assembly, being in session, surrounded at that moment by an imposing display of troops, heard the report of the Representative Waldeck-Rousseau, read on behalf of the committee which had been appointed to scrutinize the votes in the election of President of the Republic; a report in which general attention had marked this phrase, which embodied its whole idea: “It is the seal of its inviolable authority which the nation, by this admirable application of the fundamental law, itself affixes on the Constitution, to render it sacred and inviolable.” Amid the profound silence of the nine hundred representatives, of whom almost the entire number was assembled, the President of the National Constituent Assembly, Armaud Marrast, rose and said:–

“In the name of the French people,

“Whereas Citizen Charles-Louis-Napoleon Bonaparte, born at Paris, fulfils the conditions of eligibility prescribed by Article 44 of the Constitution;

“Whereas in the ballot cast throughout the extent of the territory of the Republic, for the election of President, he has received an absolute majority of votes;

“By virtue of Articles 47 and 48 of the Constitution, the National Assembly proclaims him President of the Republic from this present day until the second Sunday in May, 1852.”

There was a general movement on all the benches, and in the galleries filled with the public; the President of the Constituent Assembly added:

“According to the terms of the decree, I invite the Citizen President of the Republic to ascend the tribune, and to take the oath.”

The representatives who crowded the right lobby returned to their places and left the passage free. It was about four in the afternoon, it was growing dark, and the immense hall of the Assembly having become involved in gloom, the chandeliers were lowered from the ceiling, and the messengers placed lamps on the tribune. The President made a sign, the door on the right opened, and there was seen to enter the hall, and rapidly ascend the tribune, a man still young, attired in black, having on his breast the badge and riband of the Legion of Honour.

All eyes were turned towards this man. A pallid face, its bony emaciated angles thrown into bold relief by the shaded lamps, a nose large and long, moustaches, a curled lock of hair above a narrow forehead, eyes small and dull, and with a timid and uneasy manner, bearing no resemblance to the Emperor,–this man was Citizen Charles-Louis-Napoleon Bonaparte.

During the murmurs which greeted his entrance, he remained for some instants, his right hand in the breast of his buttoned coat, erect and motionless on the tribune, the pediment of which bore these dates: February 22, 23, 24; and above which were inscribed these three words: Liberty, Equality, Fraternity.

Before being elected President of the Republic, Charles-Louis-Napoleon Bonaparte had been a representative of the people for several months, and though he had rarely attended a whole sitting, he had been frequently seen in the seat he had selected, on the upper benches of the Left, in the fifth row in the zone commonly called the Mountain, behind his old preceptor, Representative Vieillard. This man, then, was no new figure in the Assembly, yet his entrance on this occasion produced a profound sensation. It was to all, to his friends as to his foes, the future that entered, an unknown future. Amid the immense murmur, produced by the whispered words of all present, his name passed from mouth to mouth, coupled with most diverse opinions. His antagonists detailed his adventures, his coups-de-main, Strasburg, Boulogne, the tame eagle, and the piece of meat in the little hat. His friends dwelt upon his exile, his proscription, his imprisonment, an excellent work of his on the artillery, his writings at Ham, which were marked, to a certain degree, with the liberal, democratic, and socialistic spirit, the maturity of the more sober age at which he had now arrived; and to those who recalled his follies, they recalled his misfortunes.

General Cavaignac, who, not having been elected President, had just resigned his power into the hands of the Assembly, with that tranquil laconism which befits republics, was seated in his customary place at the head of the ministerial bench, on the left of the tribune, and observed in silence, with folded arms, this installation of the new man.

At length silence was restored, the President of the Assembly struck the table before him several times with his wooden knife, and then, the last murmurs having subsided, said:

“I will now read the form of the oath.”