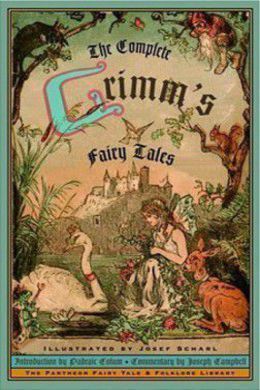 Dwarves, giants, princesses, kings, fairies, and magicians … all can be found in the enchanting fairy tales of the Brothers Grimm. Sixty-two of the Grimms’ best stories are brought to life, from well-known favorites like “Rapunzel,” “Red Riding Hood,” “Rumpelstiltskin,” and “Hansel and Grethel,” to lesser-known treasures such as “The Valiant Tailor” and “The Frog Prince.”

A certain king had a beautiful garden, and in the garden stood a tree which bore golden apples. These apples were always counted, and about the time when they began to grow ripe it was found that every night one of them was gone. The king became very angry at this, and ordered the gardener to keep watch all night under the tree. The gardener set his eldest son to watch; but about twelve o’clock he fell asleep, and in the morning another of the apples was missing. Then the second son was ordered to watch; and at midnight he too fell asleep, and in the morning another apple was gone. Then the third son offered to keep watch; but the gardener at first would not let him, for fear some harm should come to him: however, at last he consented, and the young man laid himself under the tree to watch. As the clock struck twelve he heard a rustling noise in the air, and a bird came flying that was of pure gold; and as it was snapping at one of the apples with its beak, the gardener’s son jumped up and shot an arrow at it. But the arrow did the bird no harm; only it dropped a golden feather from its tail, and then flew away. The golden feather was brought to the king in the morning, and all the council was called together. Everyone agreed that it was worth more than all the wealth of the kingdom: but the king said, ‘One feather is of no use to me, I must have the whole bird.’

Then the gardener’s eldest son set out and thought to find the golden bird very easily; and when he had gone but a little way, he came to a wood, and by the side of the wood he saw a fox sitting; so he took his bow and made ready to shoot at it. Then the fox said, ‘Do not shoot me, for I will give you good counsel; I know what your business is, and that you want to find the golden bird. You will reach a village in the evening; and when you get there, you will see two inns opposite to each other, one of which is very pleasant and beautiful to look at: go not in there, but rest for the night in the other, though it may appear to you to be very poor and mean.’ But the son thought to himself, ‘What can such a beast as this know about the matter?’ So he shot his arrow at the fox; but he missed it, and it set up its tail above its back and ran into the wood. Then he went his way, and in the evening came to the village where the two inns were; and in one of these were people singing, and dancing, and feasting; but the other looked very dirty, and poor. ‘I should be very silly,’ said he, ‘if I went to that shabby house, and left this charming place’; so he went into the smart house, and ate and drank at his ease, and forgot the bird, and his country too.

Time passed on; and as the eldest son did not come back, and no tidings were heard of him, the second son set out, and the same thing happened to him. He met the fox, who gave him the good advice: but when he came to the two inns, his eldest brother was standing at the window where the merrymaking was, and called to him to come in; and he could not withstand the temptation, but went in, and forgot the golden bird and his country in the same manner.

Time passed on again, and the youngest son too wished to set out into the wide world to seek for the golden bird; but his father would not listen to it for a long while, for he was very fond of his son, and was afraid that some ill luck might happen to him also, and prevent his coming back. However, at last it was agreed he should go, for he would not rest at home; and as he came to the wood, he met the fox, and heard the same good counsel. But he was thankful to the fox, and did not attempt his life as his brothers had done; so the fox said, ‘Sit upon my tail, and you will travel faster.’ So he sat down, and the fox began to run, and away they went over stock and stone so quick that their hair whistled in the wind.

When they came to the village, the son followed the fox’s counsel, and without looking about him went to the shabby inn and rested there all night at his ease. In the morning came the fox again and met him as he was beginning his journey, and said, ‘Go straight forward, till you come to a castle, before which lie a whole troop of soldiers fast asleep and snoring: take no notice of them, but go into the castle and pass on and on till you come to a room, where the golden bird sits in a wooden cage; close by it stands a beautiful golden cage; but do not try to take the bird out of the shabby cage and put it into the handsome one, otherwise you will repent it.’ Then the fox stretched out his tail again, and the young man sat himself down, and away they went over stock and stone till their hair whistled in the wind.