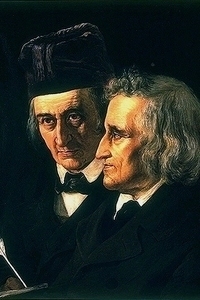 The Brothers Grimm (Jacob and Wilhelm Grimm), were German academics who were best known for publishing collections of folk tales and fairy tales, which became popular. They also did academic work in linguistics, related to how the sounds in words shift over time (Grimm’s law). They are among the best-known story tellers of folk tales from Europe, and their work popularized such tales as “Rumpelstiltskin”, “Snow White”, “Sleeping Beauty”, “Rapunzel”, “Cinderella”, “Hansel and Gretel”, and “The Frog Prince”.

Dwarves, giants, princesses, kings, fairies, and magicians … all can be found in the enchanting fairy tales of the Brothers Grimm. Sixty-two of the Grim...read more »

Included here are fairy tales from “Children’s and Household Tales” by the Brothers Grimm, translated by Margaret Hunt. The translation is based on the ...read more »