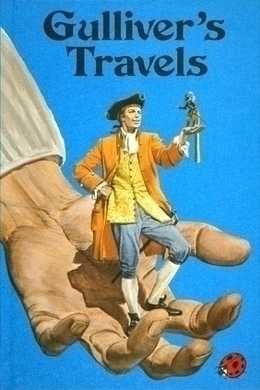 Into Several Remote Regions of the World

Shipwrecked and cast adrift, Lemuel Gulliver wakes to find himself on Lilliput, an island inhabited by little people, whose height makes their quarrels over fashion and fame seem ridiculous. His subsequent encounters - with the crude giants of Brobdingnag, the philosophical Houyhnhnms and brutish Yahoos - give Gulliver new, bitter insights into human behaviour. Swift’s savage satire views mankind in a distorted hall of mirrors as a diminished, magnified and finally bestial species, presenting us with an uncompromising reflection of ourselves.

My father had a small estate in Nottinghamshire; I was the third of five sons. He sent me to Emmanuel College in Cambridge at fourteen years old, where I resided three years, and applied myself close to my studies; but the charge of maintaining me, although I had a very scanty allowance, being too great for a narrow fortune, I was bound apprentice to Mr. James Bates, an eminent surgeon in London, with whom I continued four years; and my father now and then sending me small sums of money, I laid them out in learning navigation, and other parts of the mathematics useful to those who intend to travel, as I always believed it would be, some time or other, my fortune to do. When I left Mr. Bates, I went down to my father, where, by the assistance of him, and my uncle John and some other relations, I got forty pounds, and a promise of thirty pounds a year, to maintain me at Leyden. There I studied physic two years and seven months, knowing it would be useful in long voyages.

Soon after my return from Leyden, I was recommended by my good master, Mr. Bates, to be surgeon to the “Swallow,” Captain Abraham Pannell, commander; with whom I continued three years and a half, making a voyage or two into the Levant, and some other parts. When I came back I resolved to settle in London; to which Mr. Bates, my master, encouraged me, and by him I was recommended to several patients. I took part of a small house in the Old Jewry; and, being advised to alter my condition, I married Mrs. Mary Burton, second daughter to Mr. Edmund Burton, hosier in Newgate Street, with whom I received four hundred pounds for a portion.

But my good master, Bates, dying in two years after, and I having few friends, my business began to fail; for my conscience would not suffer me to imitate the bad practice of too many among my brethren. Having, therefore, consulted with my wife, and some of my acquaintance, I determined to go again to sea. I was surgeon successively in two ships, and made several voyages, for six years, to the East and West Indies, by which I got some addition to my fortune. My hours of leisure I spent in reading the best authors, ancient and modern, being always provided with a good number of books; and, when I was ashore, in observing the manners and dispositions of the people, as well as learning their language, wherein I had a great facility, by the strength of my memory.

The last of these voyages not proving very fortunate, I grew weary of the sea, and intended to stay at home with my wife and family. I removed from the Old Jewry to Fetter Lane, and from thence to Wapping, hoping to get business among the sailors; but it would not turn to account. After three years’ expectation that things would mend, I accepted an advantageous offer from Captain William Prichard, master of the “Antelope,” who was making a voyage to the South Sea. We set sail from Bristol, May 4, 1699; and our voyage at first was very prosperous.

It would not be proper, for some reasons, to trouble the reader with the particulars of our adventures in those seas. Let it suffice to inform him, that, in our passage from thence to the East Indies, we were driven by a violent storm, to the northwest of Van Diemen’s Land.

By an observation, we found ourselves in the latitude of 30 degrees and 2 minutes south. Twelve of our crew were dead by immoderate labor and ill food; the rest were in a very weak condition.

On the fifth of November, which was the beginning of summer in those parts, the weather being very hazy, the seamen spied a rock within half a cable’s length of the ship; but the wind was so strong, that we were driven directly upon it, and immediately split. Six of the crew, of whom I was one, having let down the boat into the sea, made a shift to get clear of the ship and the rock. We rowed, by my computation, about three leagues, till we were able to work no longer, being already spent with labor, while we were in the ship. We, therefore, trusted ourselves to the mercy of the waves; and, in about half an hour, the boat was overset by a sudden flurry from the north. What became of my companions in the boat, as well as those who escaped on the rock, or were left in the vessel, I cannot tell, but conclude they were all lost.

For my own part, I swam as fortune directed me, and was pushed forward by wind and tide. I often let my legs drop, and could feel no bottom; but, when I was almost gone, and able to struggle no longer, I found myself within my depth; and, by this time, the storm was much abated.