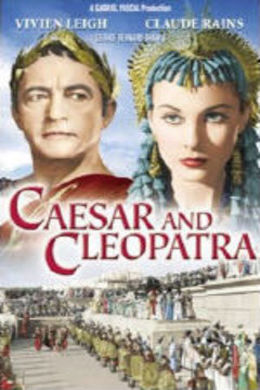 Set in Egypt, Caesar and Cleopatra, is a drama in which the 50-year-old Roman general meets the childish young Queen and exerts a fatherly influence on her.

An October night on the Syrian border of Egypt towards the end of the XXXIII Dynasty, in the year 706 by Roman computation, afterwards reckoned by Christian computation as 48 B.C. A great radiance of silver fire, the dawn of a moonlit night, is rising in the east. The stars and the cloudless sky are our own contemporaries, nineteen and a half centuries younger than we know them; but you would not guess that from their appearance. Below them are two notable drawbacks of civilization: a palace, and soldiers. The palace, an old, low, Syrian building of whitened mud, is not so ugly as Buckingham Palace; and the officers in the courtyard are more highly civilized than modern English officers: for example, they do not dig up the corpses of their dead enemies and mutilate them, as we dug up Cromwell and the Mahdi. They are in two groups: one intent on the gambling of their captain Belzanor, a warrior of fifty, who, with his spear on the ground beside his knee, is stooping to throw dice with a sly-looking young Persian recruit; the other gathered about a guardsman who has just finished telling a naughty story (still current in English barracks) at which they are laughing uproariously. They are about a dozen in number, all highly aristocratic young Egyptian guardsmen, handsomely equipped with weapons and armor, very unEnglish in point of not being ashamed of and uncomfortable in their professional dress; on the contrary, rather ostentatiously and arrogantly warlike, as valuing themselves on their military caste.

Belzanor is a typical veteran, tough and wilful; prompt, capable and crafty where brute force will serve; helpless and boyish when it will not: an effective sergeant, an incompetent general, a deplorable dictator. Would, if influentially connected, be employed in the two last capacities by a modern European State on the strength of his success in the first. Is rather to be pitied just now in view of the fact that Julius Caesar is invading his country. Not knowing this, is intent on his game with the Persian, whom, as a foreigner, he considers quite capable of cheating him.

His subalterns are mostly handsome young fellows whose interest in the game and the story symbolizes with tolerable completeness the main interests in life of which they are conscious. Their spears are leaning against the walls, or lying on the ground ready to their hands. The corner of the courtyard forms a triangle of which one side is the front of the palace, with a doorway, the other a wall with a gateway. The storytellers are on the palace side: the gamblers, on the gateway side. Close to the gateway, against the wall, is a stone block high enough to enable a Nubian sentinel, standing on it, to look over the wall. The yard is lighted by a torch stuck in the wall. As the laughter from the group round the storyteller dies away, the kneeling Persian, winning the throw, snatches up the stake from the ground.

BELZANOR. By Apis, Persian, thy gods are good to thee.

THE PERSIAN. Try yet again, O captain. Double or quits!

BELZANOR. No more. I am not in the vein.

THE SENTINEL (poising his javelin as he peers over the wall). Stand. Who goes there?

They all start, listening. A strange voice replies from without.

VOICE. The bearer of evil tidings.

BELZANOR (calling to the sentry). Pass him.

THE SENTINEL. (grounding his javelin). Draw near, O bearer of evil tidings.

BELZANOR (pocketing the dice and picking up his spear). Let us receive this man with honor. He bears evil tidings.

The guardsmen seize their spears and gather about the gate, leaving a way through for the new comer.

PERSIAN (rising from his knee). Are evil tidings, then, honorable?

BELZANOR. O barbarous Persian, hear my instruction. In Egypt the bearer of good tidings is sacrificed to the gods as a thank offering but no god will accept the blood of the messenger of evil. When we have good tidings, we are careful to send them in the mouth of the cheapest slave we can find. Evil tidings are borne by young noblemen who desire to bring themselves into notice. (They join the rest at the gate.)

THE SENTINEL. Pass, O young captain; and bow the head in the House of the Queen.

VOICE. Go anoint thy javelin with fat of swine, O Blackamoor; for before morning the Romans will make thee eat it to the very butt.

The owner of the voice, a fairhaired dandy, dressed in a different fashion to that affected by the guardsmen, but no less extravagantly, comes through the gateway laughing. He is somewhat battle-stained; and his left forearm, bandaged, comes through a torn sleeve. In his right hand he carries a Roman sword in its sheath. He swaggers down the courtyard, the Persian on his right, Belzanor on his left, and the guardsmen crowding down behind him.